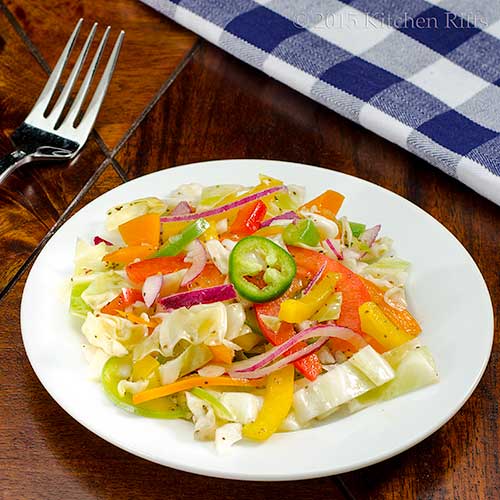 Perk up your cookouts with this colorful, tangy slaw

Here in the US, summer cookout season officially starts on Memorial Day. It arrives early this year—next Monday, to be precise (with the weekend before as warmup).

So you’re probably looking for outdoor-friendly food. Especially side dishes with enough flavor to match the burgers, barbecue, and grilled goodies we’ll be preparing. And preferably something you can make ahead of time—so you can enjoy the festivities with your guests, rather than slaving in the kitchen.

How about a colorful coleslaw that features the sweet taste of bell peppers? Add a garlic vinaigrette and maybe a touch of jalapeño, and you’ve got a dish that’s sure to please. Your guests will think you spent hours putting it together. No need to tell them how easy it is. 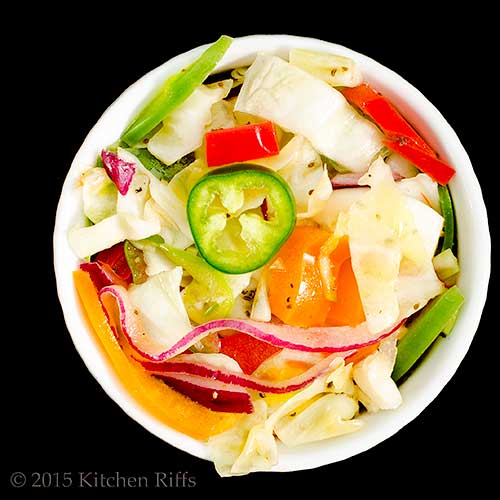 The most popular type of slaw in the US is probably mayonnaise-based Creamy Coleslaw. But we’re partial to vinaigrette-based slaws. We appreciate the sharp taste that vinegar brings to the party. Plus, vinegar-based slaws keep better in the refrigerator (and even improve in flavor after resting for a while), so no worries when you prepare them a day or two ahead of time.

You can (and should) eyeball ingredient quantities for this dish. In particular, you may wish to add more cabbage than we suggest. Or fewer bell peppers. Whatever appeals to you will probably work.

We discovered this dish decades ago in one of James Beard’s cookbooks—probably James Beard’s American Cookery. Over the years, Beard did numerous versions of this recipe. But the basic idea remained the same, and our recipe is derived from his various iterations.

Prep time for this dish is 20 to 30 minutes. Then you should let the coleslaw crisp in the refrigerator for at least an hour (2 or 3 hours, or overnight, is even better).

This recipe yields 10 to 12 servings. Leftovers keep well in the refrigerator for 3 days or so if stored in an airtight container. (They’ll be safe to eat for a week or even longer, but the quality will begin to deteriorate after a few days).

For the Garlic Vinaigrette:
For the Salad:
Procedure

For the Garlic Vinaigrette:
For the Salad: 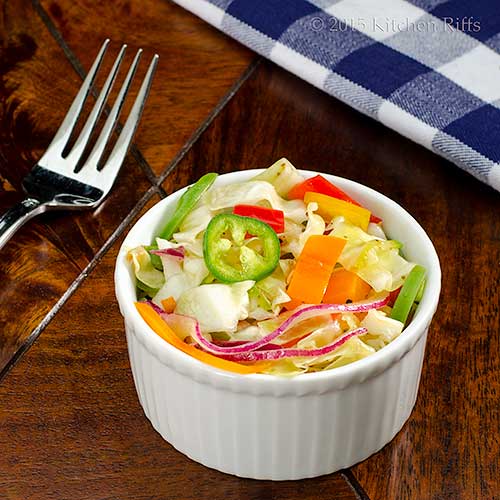 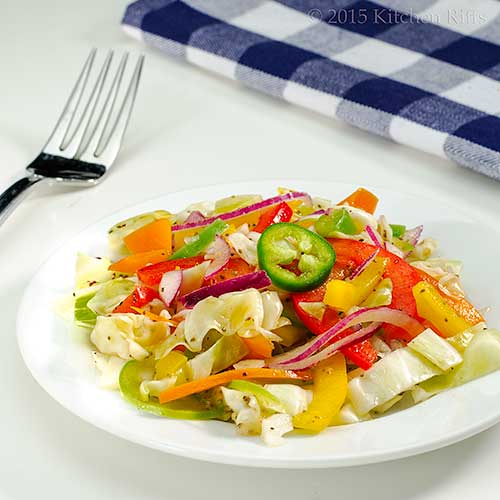 Summertime, When the Eating is Easy

“Perfect for our Memorial Day bash,” I said.

“Probably Barbecued Pork Steaks,” I said. “Served with our own version of KC-Style Barbecue Sauce. But we may decide on something simpler—like Grilled Bratwurst or hot dogs.”

“And this coleslaw, of course,” said Mrs K R. “Although your Hungarian Cucumber Salad makes a dandy picnic dish too. And what about potato salad? We did that terrific Chipotle Sweet-Potato Salad last year.”

“That’s a good one,” I said. “Although this year I’m thinking maybe Horseradish Potato Salad. Or perhaps a nice Southern-style Mustard Potato Salad.”

“Both excellent choices,” said Mrs K R. “I’m getting hungry already. Dessert will be my department, of course. Probably we’ll do our traditional Root Beer Floats—aka Black Cows. Or maybe we’ll use strawberries in an easy no-cook Fruit Fool.”

“Appropriately named for the likes of us,” I said.

“Yup, a topic on which our expertise is unmatched,” said Mrs K R.