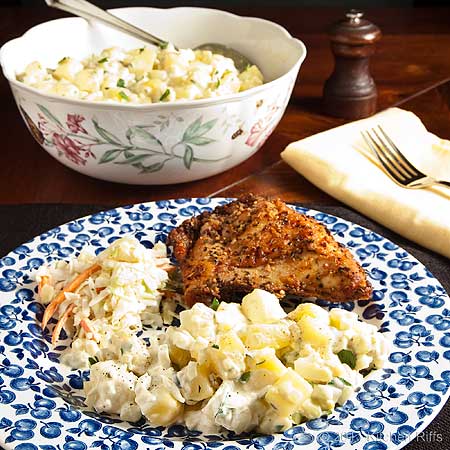 For many of us in the United States, classic mayonnaise potato salad is the ultimate summer comfort food.  We associate it with picnics, fried chicken, and barbeque.  Hot dogs and hamburgers, too.  Good times, good memories.

For a lot of us, though, the potato salad of memory has been replaced by deli fare.  Either we (think) we don’t have the time to make the real thing or don’t know how. 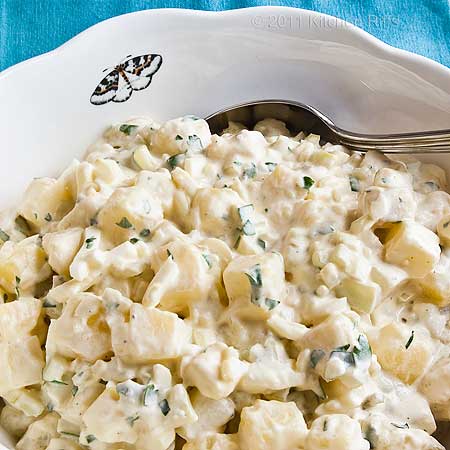 This classic potato salad recipe is adapted from one used by the grandmother of Mrs. Kitchen Riffs. It will serve 12 to 16 as a side dish, so you can serve it at a big summer get-together. It can easily be halved.  I think it tastes better if refrigerated overnight. 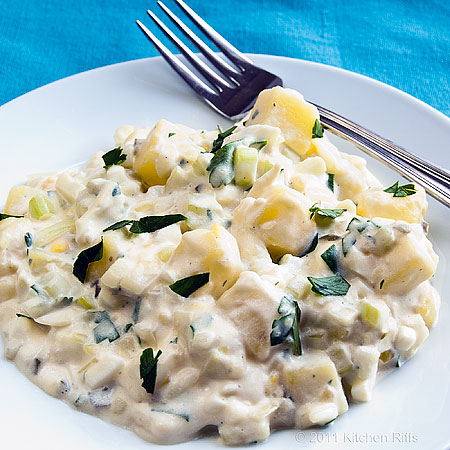 This is the fourth in our Potato Salad Fortnight series. The first was Potato Salad Basics Recipe, the second was French Potato Salad, and the third was a primer on how to hard-boil eggs (a necessity for American Potato Salad). Coming later this week will be German Potato Salad. 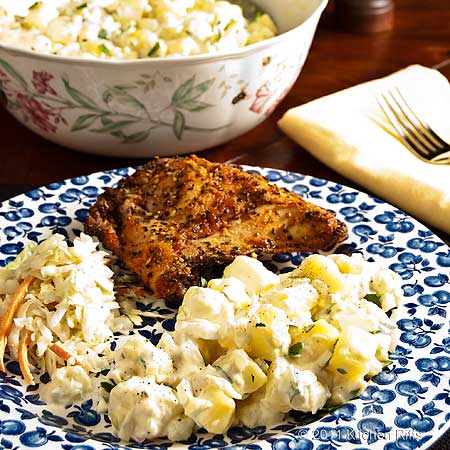 Miracle Whip was developed by Kraft during the Great Depression as a less expensive alternative to mayonnaise. It is technically a “salad dressing,” and it has a sweetish tang that many people like. Indeed, some people swear allegiance to Miracle Whip and despise mayonnaise such as Hellmann’s (and vice versa).

For American potato salad, I’m partial to Hellmann’s, while Mrs. Kitchen Riffs tends to prefer Miracle Whip. You might say we have a mixed marriage. But we’re reasonable sorts. Because we both prefer mayonnaise most of the time, Hellmann’s is what we generally buy (and thus generally use in our potato salad).

But occasionally, Mrs. K R gets a wistful look in her eye when we’re in the supermarket buying fixings for potato salad. Over the years, I’ve learned that’s a sign that maybe we should make our next batch with Miracle Whip.

After all, we crave a lot of foods not only because they’re good, but because of the memories they hold for us. Sometimes Miracle Whip is perfection.

Nicole @ It's Feeding Time at the Zoo said...

Hi Nicole, I'm certainly in your camp! Thanks for leaving a comment.

I had to laugh when I saw your sub head on this post. My mom didn't have a signature potato salad, but did have a mac and cheese salad that has remains a family classic. You should hear my sisters debate Miracle Whip vs. Mayonaise and how much to use! One sister prefers one, the other Hellman's (called Best foods in parts of the country). Me I use a bit of mayo and some olive oil.

We make a dressing close to yours...Mayo, vinegar, sugar and a squirt of mustard with a little salt and pepper. You can always find a jar of it in the fridge. We use it for tuna salad, deviled eggs, a sandwich spread and of course, my mom's famous potato salad!

@FJK, family classics are great, aren't they? When writing this I actually did a quick Google search on Hellman's vs. Miracle Whip, and there's a lot of angst out there over which is better. I think it's all what one grew up with. Both are good, just different. Thanks for the comments.

@Jill, mustard in potato salad is wonderful. Good idea to use the mustard in tuna salad - that wouldn't have occurred to me. I'll have to give that a try sometime. Thanks.

how many would I need for six people (potatoes)

Hi Anonymous, probably about 2 1/2 pounds of potatoes - just cut the recipe in half. It depends on your appetites, though - you may have some leftovers. Or if you have a bunch of teenage boys with their enormous appetites, you may need more!

When I was a little kid, we only had mayonnaise in the house, but there was a family friend we'd visit several hours away who only used Miracle Whip. I honestly thought it was something that wasn't available where I lived, and I thought it was the greatest thing ever. Once I found out that it was available by us and convinced my mom to buy it so that we could have it, I didn't like it as much because it wasn't "special" anymore; once it was everyday, it became too sweet for me. Now that I'm living on my own, I keep mayonnaise in the house but get Miracle Whip every once in a while as a treat; this way it stays "special" when I do have it.

Hi Anonymous, fun story! As often as not we're making our own mayo these days, though we always keep a jar of Hellman's around when we need just a little. And every now and again we do make this salad using Miracle Whip! Gotta keep that tradition going. ;-) Thanks for your comment.

Hi Suborna, synonymous indeed! :-) Glad you liked it, and thanks for the comment.