We’re well into picnic season, and what’s better for a picnic than potato salad? During the next two weeks — or fortnight, as our British cousins might say — Kitchen Riffs will dedicate itself to discussing potatoes and their salads. We’ll have posts on French Potato Salad, American (Mayonnaise) Potato Salad, and German Potato Salad.

But before we get to any of these recipes, in this post we’ll first discuss some basic facts and techniques that are common to all potato salads. 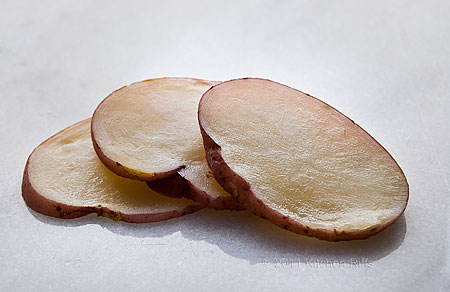 This recipe explains how to prepare and cook potatoes so you can then use them in almost any potato salad recipe on the planet.

Most traditional recipes stipulate that you should first boil the potatoes whole with their skins on, then peel and slice or dice them when they’re cool enough to handle. I always hated that. I burned my fingers, and found it such a pain that I only made potato salad once or twice a year.

Fortunately, Julia Child came to the rescue — as she did so often. Her sensible, no-nonsense solution: Cut your potatoes (peeled or not, as you choose) into the desired shape first, then cook them. No more burned fingers, a much faster cooking time, and much better control over the degree of doneness of your cooked potato.  This simple trick is foolproof and works in virtually any potato salad recipe.

The information here is adapted from Julia Child’s The Way to Cook. I usually prepare either 2½ or 5 pounds of potatoes when I make potato salad (I have no idea how I arrived at this custom). 2½ pounds of potatoes will serve about 8 people as a side dish. You can easily adjust this recipe to suit your needs.


What Kind of Potatoes Should You Use?

Although there are thousands of varieties of potatoes, supermarkets rarely label the ones they sell. There are exceptions — Yukon Gold and Red Bliss are frequently identified by name — but more frequently we just see “russet” or “Idaho” or “red” or “white” potatoes. (Farmers’ Markets often do identify potatoes by variety.)

Supermarkets also don’t usually identify which potatoes are starchy (russets and Idaho) and which are waxy (most red potatoes). You’re just supposed to know. Sometimes it doesn’t matter whether you use a starchy or waxy potato (either is quite workable when roasted, for instance), but in many recipes it most definitely makes a difference.

Potato salad is one dish where using the correct potato is important. Here you want a potato that will hold its shape when cooked — and that means waxy. Because waxy potatoes tend to be rounder than their oblong (starchy) counterparts, round is what you want to look for when shopping for potatoes to use in salad. New potatoes work well. So do more mature (and larger) red-skinned and white-skinned potatoes. Yukon Golds have a flavor that works particularly well in potato salad.

This recipe produces cooked potatoes that will work for virtually every potato salad.  So rather than repeat these instructions in every recipe, I’m covering potato prep in detail here, and will just refer back to this post when necessary.

Later this week, we’ll discuss French Potato Salad — the most basic potato salad I know.  Once we understand how and why this recipe works, we’ll understand most other potato salad recipes.  That’s because most potato salads are just fancier versions of the simple French recipe.

Then next week, we’ll cover German and American potato salads.  And somewhere in there, we’ll discuss hard-boiled eggs (in part because they’re a necessary ingredient in many recipes, but mainly because I have a cool hard-boiled egg photograph I’d like to share).

If you cook your potatoes when they are already cut they go soggy and watery. Stick to the old way of cooking them whole with skins on. There is a reason why things are tried and tested!

Hi Bianca, I understand your reluctance to embrace this method of cooking potatoes - I had similar concerns to yours! But this method does work. Two things to consider. First, after you drain the potatoes, you're putting them in a closed pot for a few minutes to firm up. What this means is the cells close up and make the potato easier to slice. And part of this process includes excess moisture evaporating. Second, potato skins aren't totally waterproof! Think about it - you salt water when you boil potatoes, whether in their skins or not. The salt dissolves in the water, becoming part of the liquid solution. It's this liquid solution that flows in and out of the potatoes as they cook, that is the way the flavor of the salt is transferred to and absorbed by the potato cells. And potatoes are naturally high in water to begin with - I believe the percentage is in the high 70s. There are a lot of good reasons to go with the tried and tested. But it's worth giving this method a try sometime - it's a bit easier, and the results are excellent. Thanks for your comment.

I have always cooked my potatoes peeled and as long as I watch that they don't get overlooked i have never had an issue with them being watery or soggy!
Thanks for the great article!

Hi Donna, cooking the potatoes peeled is so much easier, and really does work. It's a really handy method, isn't it? Thanks for the comment.

I am so excited to try this! THank you for the great article.

Hi Anonymous, enjoy! And thanks for commenting.

In The Netherlands and Belgium we do eat potatoes almost daily. It is a basic food. Think of Van Gogh, "The potato eaters". And we never cook and eat them unpeeled. There's a good reason for this.Potatoes need to be stored and they sprout easily. So farmers, grocers, cookes powder the potatoes to prevent sprouting. And the powder they use does contain some poisonous chemicals. The poison can be detected in the peel and even in outer layer of the potato. So we peel potatoes thickly.

Hi Anonymous, some good tips! Thanks for the comment.

The BEST potato salad I've ever eaten came from true NY delicatessens. I would always get some when traveling back home, but true NY deli's are falling by the wayside now. I did find a recipe that is exactly like I remember. I've made it both the original way, but also peeling and slicing them to size first. I prefer slicing them afterwards.

Steam potatoes over 32-40 oz. water.
Peel while hot. (You can actually scrape off the skin by hand under cold water.).
Cool in refrigerator for at least one hour.
Mix next seven ingredients in a bowl, adding oil last.
Slice the potatoes in 1/4" slices into a very large bowl.
Fold in the mixture.
Chill overnight.
Add Hellman's mayo to desired consistency.

Hi Pat, nice recipe! NYC deli potato salad can be good, but it really depends on the deli. We used to work in Manhattan, and do miss those delis! :-) Thanks for the comment.