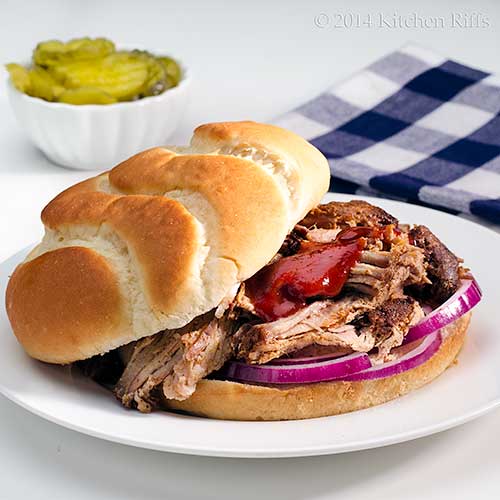 Pulled pork takes a while to make if you do it the traditional way—12 hours or more of slow cooking with wood smoke. Plus you need to hang around outside to tend the fire. For most of us, that’s just not going to happen very often (especially when the weather turns cold, as it has right now in much of the US).

Well, good news! You can “barbecue” a pork shoulder in your oven—and get succulent pulled pork that rivals your favorite BBQ joint’s.

With the Super Bowl coming up in a couple of weeks, you may be having some friends over to watch the game. Hungry friends. Serve them this great pulled pork and you’ll be a winner—no matter how your team plays. 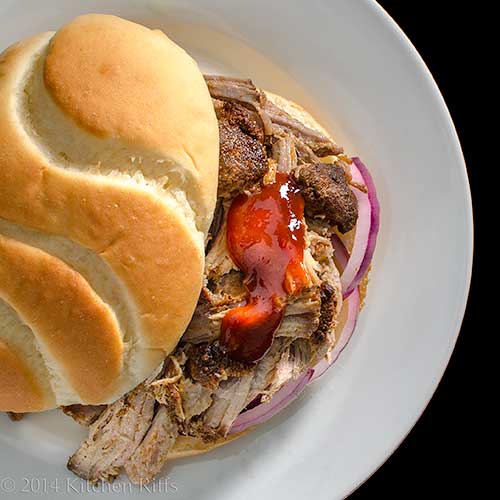 Note: in January, 2016 we published a slow cooker version of this recipe that you might also want to check out: Slow Cooker BBQ Pulled Pork

This recipe is a riff off my Oven Slow-Cooked BBQ Spare Ribs. It’s even easier though, because pork shoulder is more forgiving in terms of temperature sensitivity. And if you're interested in a similar recipe for beef brisket, check out Oven Slow-Cooked BBQ Beef Brisket.)

As noted in the post on spare ribs, people often use the term “barbeque” for anything cooked outdoors on a Weber. But most of the time, what we’re actually doing is grilling—i.e., cooking meat over relatively high heat. That’s not a good method for most barbecue meats (like pork shoulder, spare ribs, and beef brisket), which have lots of connective tissues that make them tough. Cooked this way, pork shoulder will be “done” (i.e., safe to eat) at 160 degrees F, but it will be very chewy. Not what you want for pulled pork, which should be so tender that you can readily tear it apart—“pull” it—with your hands.

Barbecuing is very different from grilling. When you barbeque meat, you cook it at low heat (typically 200 to 225 degrees F) for several hours. This slow-cooking process allows the connective tissues and fat to melt away (which typically happens around 190 degrees F).

For this recipe, you need pork shoulder (a/k/a pork butt or Boston butt). An entire pork shoulder typically weighs 16 pounds or more (and can take a day to slow cook). So unless you’re feeding a huge crowd, you’ll want something smaller. Most supermarkets sell cuts of pork shoulder sized anywhere from 2 to 5 pounds. You can get a bone-in or boneless cut. Either works, although I think the bone-in has a bit more flavor (but of course you’ll get a bit less meat).

This recipe uses a small amount of liquid smoke to help flavor the meat during the cooking process. Good liquid smoke is a natural product, containing nothing but water and natural smoke concentrate. But do read the label; cheaper brands include chemicals you don’t want to use. BTW, I got the idea for using liquid smoke to scent the meat from Chef John, although my method of cooking the pork differs from his. Warning: As the pork cooks, your oven will emit a wood-smoke aroma. If you’re allergic, or the idea of this smell drifting through your house doesn’t appeal, omit the liquid smoke.

For this recipe, you’ll use a “rub” to season the meat, and it’s best if you apply it the day (or night) before you plan to cook the meat. You can use your own recipe for the rub, or use my favorite—which I describe below.

Preparation time for this recipe (making the rub and applying it to the pork) is about 20 minutes. Then the rubbed pork needs to rest in the refrigerator overnight before cooking. Cooking time is about 1½ to 2 hours per pound of meat. So this recipe does take a bit of time (though most of it is unattended).

This recipe yields about 6 to 8 generous servings (~2½ servings per pound of uncooked pork shoulder—the pork loses some weight as it cooks). Leftovers store well in an airtight container in the refrigerator for a few days.

For the rub:
For the pork:
Procedure

Steps 1 through 3 should be accomplished several hours before you plan to start cooking the pork. Ideally, the rub-coated, uncooked pork butt should rest in the fridge overnight. 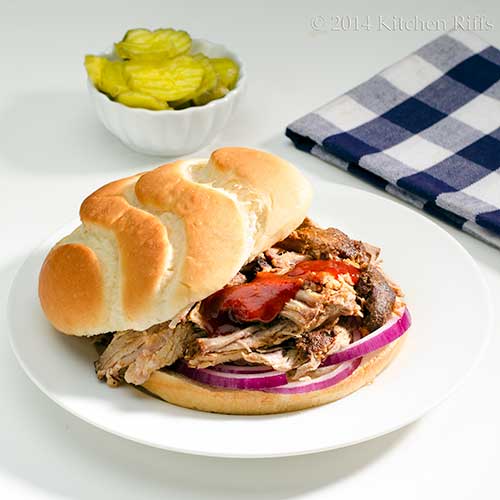 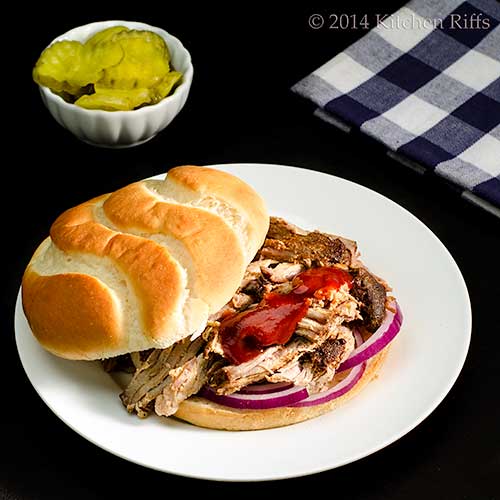 “Ummm, nothing like pulled pork,” said Mrs. Kitchen Riffs, biting into her sandwich.

“Yeah, and this will be perfect for the Super Bowl,” I said, adding more Tangy Barbecue Sauce and sliced onion to my sandwich. “Going to watch any of the game this year?”

“I’m not much of a football fan,” said Mrs K R, helping herself to some Mayonnaise Potato Salad.

“But I know you like the commercials,” I said. “Gee, I can’t decide whether this Garlic Coleslaw is better as a side dish, or as a garnish on my sandwich.”

“Well, those commercials are all online the next day,” said Mrs K R, dishing up some Baked Beans with Bacon. “So I can just watch the best ones.”

“Meaning the funny ones?” I asked.

“And the ones with Clydesdales!” said Mrs K R.

“Yeah, can’t have too many of those,” I agreed.

“Or too many pulled pork sandwiches,” said Mrs K R.

“Is that a hint that I should be making more Oven Slow-Cooked BBQ Pulled Pork?”

“Well, it’s not too late for New Year’s resolutions,” she said.

Hey, finally a resolution I can keep!