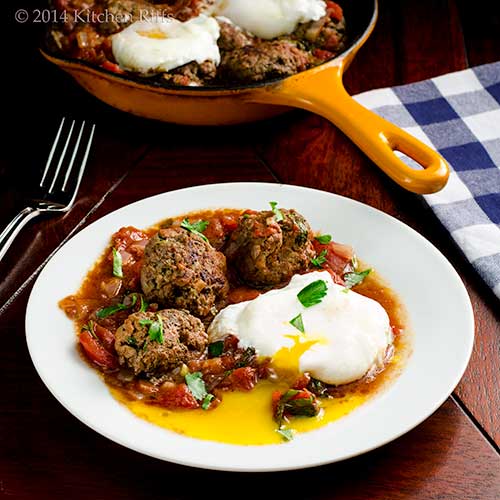 Tagines are a great favorite in Morocco. These flavorful, stew-like dishes can be made from almost any meat, fish, or vegetable you can think of.

Our recipe features kefta, a ground meat that’s flavored with aromatics (like onion) and spices (like cumin). Think of it as hamburger on steroids. We form the kefta into little meatballs, then cook them in a savory tomato sauce that’s spiced with fragrant cinnamon and other goodies.

Your guests will lap it up. And best of all, you’ll sound really cool when you say “tah-zheen.” 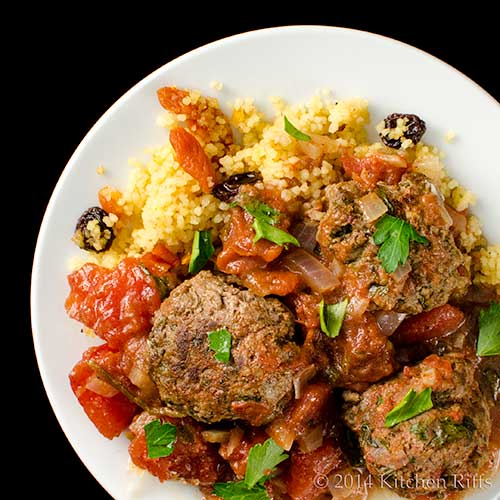 Tagine derives its name from the traditional pot in which it is cooked. A tagine (also spelled tajine) pot is an earthenware cooking vessel that comes in two pieces: a shallow base that sits over a burner or stove top, and a conical lid that helps return condensation to whatever is cooking in the bottom. But you don’t need a tagine pot to make this dish. A Dutch oven or deep frying pan works equally well.

In Morocco, every butcher has his own recipe for kefta (also spelled keefta, kifta, kofta—and other ways I’m probably not even aware of). You’re not likely to find kefta in any US supermarket, so you’ll have to mix your own. But that’s easy to do, especially if you have a food processor.

This is the first dish I learned to make when I lived in Morocco years ago. I took a cooking class, and this recipe is adapted from the one I learned there. I’ve subsequently seen nearly identical recipes in several cookbooks that have been published over the years. It’s traditional to top this dish with poached eggs, though you can omit them if you want.

When I was in Morocco, this dish was served by bringing the cooking vessel to the table. Everyone would eat communally with their right hands, using pieces of bread to scoop up the sauce and kefta meatballs. These days, I often serve this dish with rice, or over a bed of mashed potatoes. I also like to serve it over Couscous with Dried Fruit.

Preparing this dish requires a few steps—none of them difficult. You need to mix the kefta, shape it into meatballs, and brown them. Then you need to prepare the tomato sauce (the browned kefta meatballs will finish cooking in it).

Prep time for this dish is 30 minutes or so, and cooking time is about an hour (much of it unattended).

This recipe serves 6. Leftovers keep well for a few days in the refrigerator if stored in an airtight container. Or you can freeze them.

For the kefta:
For the tomato sauce:
Procedure

For the kefta:
For the tomato sauce: 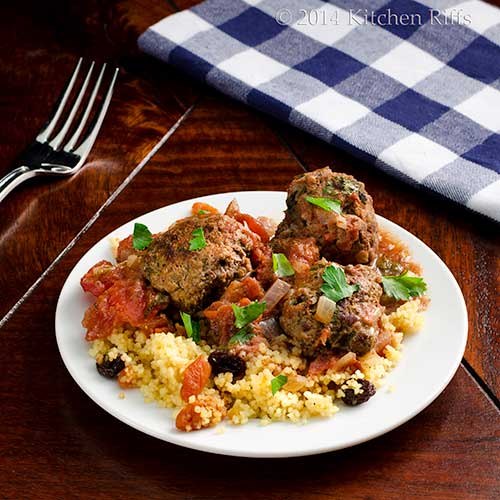 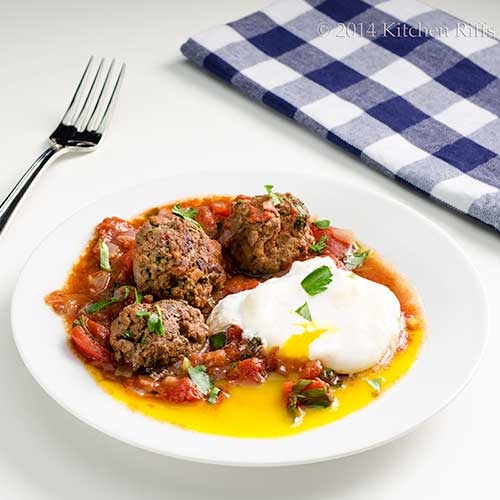 A Virtual Visit to Morocco

“Yumm-ee,” said Mrs. Kitchen Riffs, digging into her Kefta and Tomato Tagine. “This is wonderful.”

“Next time we should make some Moroccan bread to go with it,” I said.

“We’ve done a lot of it lately,” I replied. “This tagine goes well with the Couscous with Dried Fruit that we posted about earlier this week.”

“True,” said Mrs K R. “And the Moroccan Carrot Soup would make a great starter. So would the Harira—you know, the Moroccan Chickpea Soup.”

“You could also start with Moroccan Carrot Salad,” I said. “Or maybe the Moroccan Orange and Radish Salad that we made last year.”

“Mmm, oranges,” said Mrs K R. “They’re in season right now. And it would be great to have some more Moroccan dishes.”

“Yeah, maybe I should make that salad again,” I said.

“Or maybe we should go to Morocco!” said Mrs K R.

Think I know which option I’ll go for.