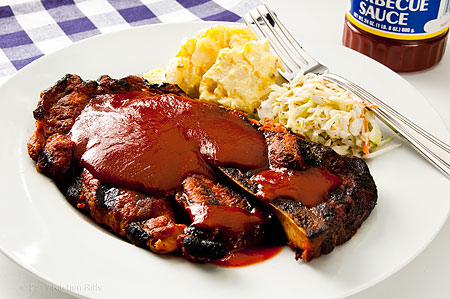 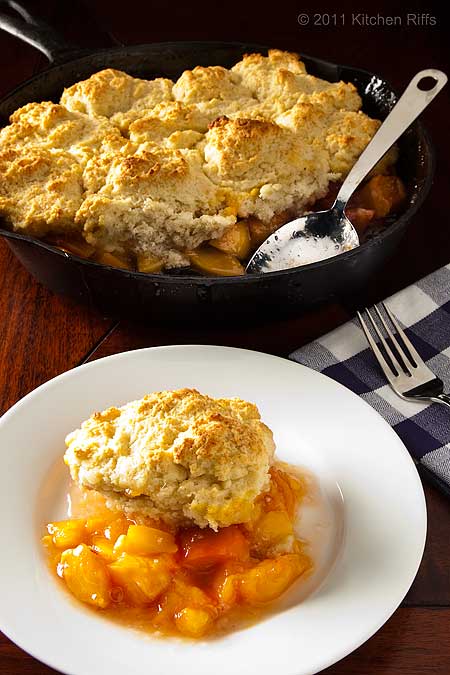 We’re approaching the end of prime peach season, but there’s still time enough to make another dessert or two using this juicy and naturally sweet fruit.

Although peach pie is terrific, there’s nothing quite so satisfying as warm peach cobbler. It’s also an all-American dessert, likely having “originated in the early British American colonies”. Most colonists didn’t have the ingredients or cooking equipment to replicate traditional British suet puddings, so they made puddings with biscuit dough. “Cobbler” got its name because the rough biscuit surface of the dessert resembles a street constructed of lumpy cobblestones.

These days, few of us make biscuits from scratch. Many people are quite skittish about making them. Too complicated, they say. Something could go wrong.

Well, drop biscuits are extremely easy to make — nothing can go wrong. And in my opinion, they work even better in cobbler than the traditional rolled version.

Best of all, they’re quick to make. 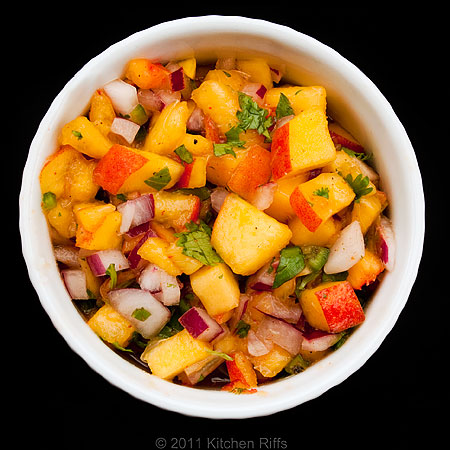 Great with Chips, Even Better with Grilled Fish or Chicken

Colorful, juicy peaches are one of the delights of summer. Their sweetness shines beautifully in rich desserts, particularly baked goodies like pies and cobblers.

One of the easiest — and best — savory peach dishes is Peach Salsa. You can serve it with chips as an appetizer. Or pair it with grilled fish or chicken (it takes grilled salmon up a level in flavor and elegance).

And you can make it in just a few minutes.

Read more »
Posted by Kitchen Riffs at 9:18 AM 4 comments 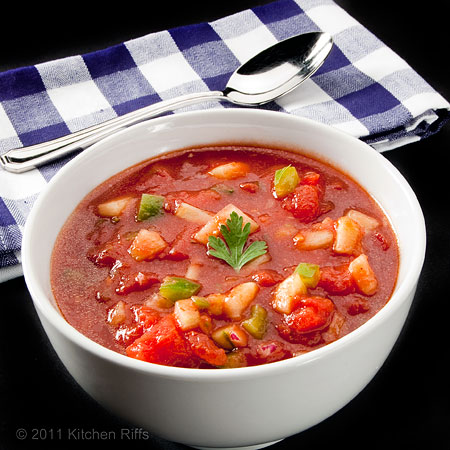 Late summer brings stifling heat, but it’s also a time when many vegetables are at their peak.  In August, tomatoes, bell peppers, and cucumbers all enter their prime.

Combine them with garlic, onion, olive oil, and wine vinegar and you have gazpacho — the liquid salad that doubles as a soup.  Its crisp coolness and rich, satisfying flavor is a great way to beat the heat.

Best of all, this Spanish classic can be served either as a first course or as a light luncheon or supper entrée.

Read more »
Posted by Kitchen Riffs at 8:44 AM 2 comments 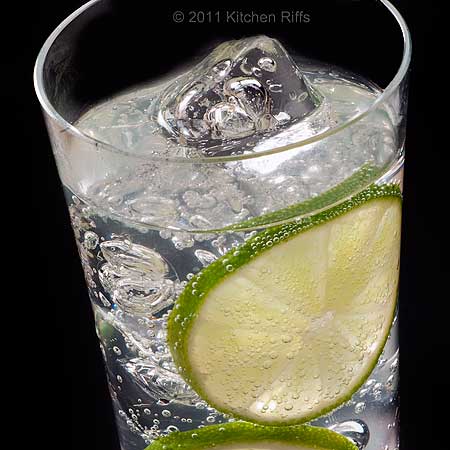 This Ultimate Summer Cooler Originated as a Health Drink

We’ve endured relentless heat these past few weeks, and I’ve been searching for ways to cope. I’ve found that Gin and Tonic, with its crisp effervescence, makes a great summer cooler.

When you’re suffering from summer doldrums, a G and T is the perfect remedy. Which seems fitting for a cocktail that originated as a medicinal drink.