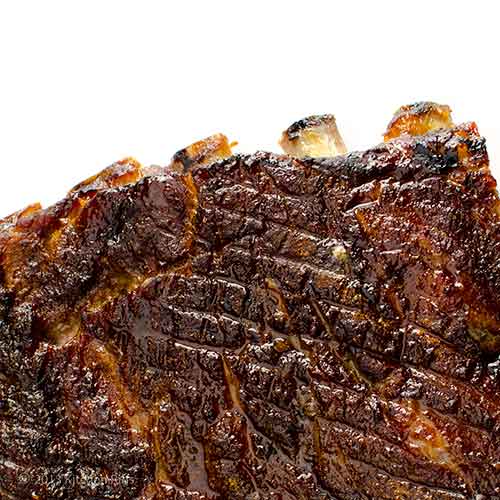 Low heat is the secret to tender, succulent barbecued ribs

The best barbecue gets its melt-in-your-mouth tenderness from long, slow cooking over very low heat — and its smoky flavor from burning wood, such as hickory or apple.  It’s a challenge for backyard grillers like me (and probably you).

“Traditional” Q requires specialized equipment (ideally a smoker) and some fragrant hardwood.  Not to mention a live fire, and lots of time.  Oh, and with that “live fire” thing, don’t even think about leaving the premises.  Accidents happen, and it would be a bummer if one happened to you.

Luckily, however, we can produce excellent barbecue without all that muss and fuss.  Cooking meat (we’re doing ribs today) in a slow oven for several hours achieves a luscious tenderness that rivals the best live-fire barbecue.  And using a smoky-flavored barbecue rub (a mix of spices and sugar that you literally rub on the meat to help flavor it) produces ribs with that hint of hardwood.  Of course, nothing replaces the flavor of real smoke, but you’ll be pretty happy with what you can achieve by using an aromatic rub.

With Memorial Day coming up soon in the US, many of us are thinking of summer grilling and barbecue.  These oven-cooked spareribs will fit right into the festivities.  They’re easy to make, and they pack flavor that will have your guests begging for seconds.  Who knew your kitchen was the next great barbecue joint? 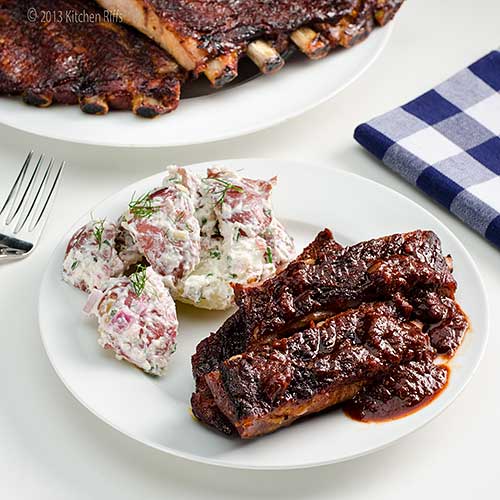 We often use the term “barbeque” for anything we cook outdoors on a Weber.  But what we’re actually doing most of the time is grilling — i.e., cooking meat or fish over relatively high heat.  This process is ideal for cooking cuts that are naturally tender.  But most barbecue meats (like pork shoulder, spare ribs, and beef brisket) have lots of connective tissues that make them tough.  So even if you cook them over high heat until they’re “done” (160 degrees F in the case of pork), the meat will still be decidedly chewy.

Barbecuing is very different from grilling.  When you barbeque meat, you cook it at low heat (typically 200 to 225 degrees F) for several hours.  This slow-cooking process allows the connective tissues and fat to melt away (which typically happens around 190 degrees F), achieving flavor and texture nirvana.  In the process, the meat will pick up an enchanting aura from being cooked in a cloud of smoke.  But this process takes time – you can’t rush it.

Fortunately, you can achieve the same degree of tenderness in your oven.  And because you don’t have to keep a live fire going at a constant temperature, you can let the barbecue cook largely unattended. The meat will come out tender and flavorful. You’ll miss the smoke but, as mentioned up top, a good rub goes a long ways towards remedying that. You can also use liquid smoke — an all-natural hardwood smoke product that’s pretty good stuff (for more info about it, see the post on Smoky Salmon and Cream Cheese Dip, where it’s discussed in detail). I don’t use liquid smoke when I’m cooking ribs, but I sometimes add a teaspoon or two to barbecue sauce.

BTW, charcoal briquettes (the fuel used by most home grillers, and many contestants in barbecue competitions) don’t produce any aromatic smoke of their own. They’re popular because they provide good heat and burn at a fairly constant rate, making it easy to control the fire. For smoke, most people add chunks of aromatic hardwood (such as hickory) to the briquettes.

Pork spare ribs have loads of flavor.  And because we eat them with our hands, they bring out the inner caveman in all of us.  What could be better?

Most supermarkets sell ribs by the slab, typically weighing 3 pounds or so.  Many slabs contain parts of the sternum bone and rib tips, which may make the ribs somewhat harder to cut apart when cooked.  If you can find “St. Louis” style ribs (sometimes called St. Louis cut ribs), they’re worth buying IMO, even though they’re usually more expensive.  When preparing St. Louis ribs, the butcher cuts away the sternum and rib tips, so you’re left with more of the good stuff (and less waste).

The rub for these ribs contains both pimentón (smoked Spanish paprika) and dried chipotle chile powder (made from smoked and dried jalapeño peppers).  The naturally smoky flavor of these ingredients helps flavor the ribs.  I always rub the ribs the night before, so they’ll have more time to pick up flavor.

Over the years, I’ve sometimes wrapped ribs in aluminum foil for cooking; other times, I’ve left them unwrapped.  Both methods achieve good-flavored, tender ribs.  When working on this post, I tried both methods again, and I’ve finally decided that I prefer wrapping the ribs in aluminum foil, so that’s the method I outline in the Procedure.  But in the Notes, I discuss the unwrapped method, too.

There are many recipes available for slow cooking foil-wrapped ribs in the oven, but the best explanation of the process I’ve seen is by Harold McGee in a June 29, 2010 New York Times article. My procedure is adapted from his.

I usually consider a pound of ribs to be one serving (people often eat more of these than you think they will — so buy ribs accordingly).  The recipe for the rub yields enough to coat 3 (maybe 4) three-pound slabs.  You can store leftover rub in an airtight container in the refrigerator for a month or two.

Preparation time for this recipe is about 20 minutes.  Cooking time (mostly unattended) is 5 or 6 hours.

For the rub:
For the ribs:
Procedure
Steps 1 through 3 should be accomplished several hours before you plan to start cooking the ribs.  Ideally, the rub-coated, uncooked ribs should rest in the fridge overnight. 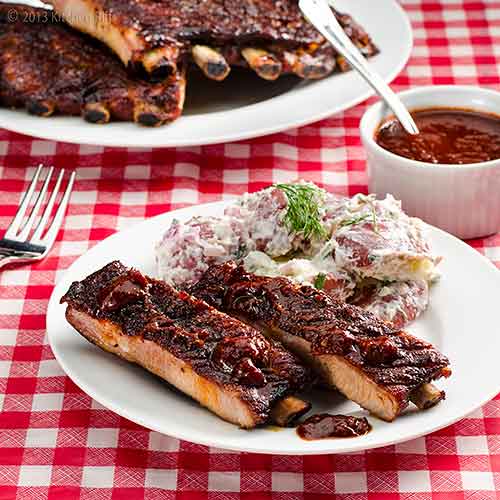 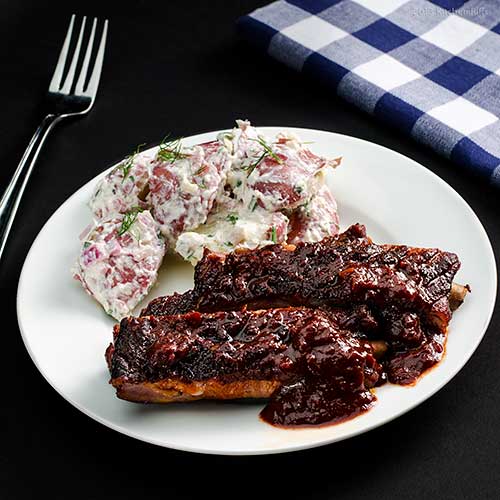 Serve with Barbecue Sauce – and Napkins

“Mmmm, super ribs,” said Mrs Kitchen Riffs, after several minutes of talk-free chomping.  Eating ribs is like that — it requires two hands and lots of gnawing, so not too much conversation takes place early in the meal.

“They’re great,” I said, wiping barbecue sauce from my chin with a napkin.  “Which do you like better — the ribs I cooked in aluminum foil — the ones we had a couple of days ago?  Or these, which I cooked without foil?”  Yes, I made two batches of ribs over the course of a weekend, just to test!

“I think I like the ones in aluminum foil better,” said Mrs K R.  “They both have great flavor, but the foil-wrapped ones were a bit more tender.  The meat was practically falling off the bone!”

“They both taste wonderful,” I agreed.  “And it’s been way too long since we’ve had them.”

“We need to do some pulled pork too,” she said.  “Maybe cook it the traditional way — low and slow with real wood smoke?  That’d be wonderful.”

“I’m planning to,” I said, “sometime this summer.  I also need to perfect my barbecue sauce.  What I made today is good, but it could be better.”

“You should get on it,” Mrs K R agreed.  “This is terrific stuff.  Maybe for your next post?”

“Sounds like a plan,” I said.  I noticed Mrs K R pointing at her chin.

“Oh, thanks,” I said.  And wiped away more barbecue sauce.

Good thing we stocked up on napkins.