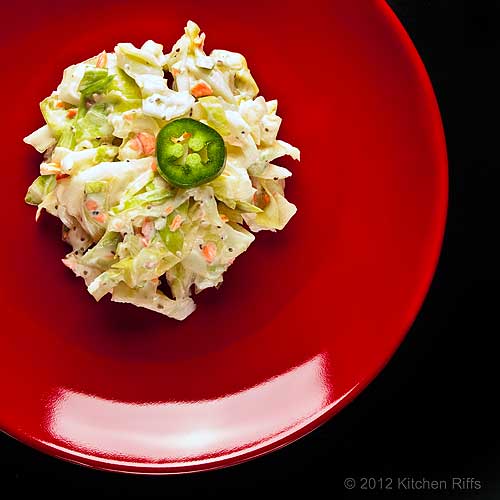 A Touch of Jalapeño and Horseradish Add Zip to this Classic

Coleslaw is the perfect sidekick for barbecue and cookout fare.  And the creamy style brings the forks out fast.

Usually made with a mayonnaise-based dressing, it has an appealing richness that showcases the flavor of the most important ingredient — cabbage.

Every supermarket and deli sells prepared coleslaw, and some of it is pretty good.  But as good as what you make in your own kitchen?  No way!

This weekend we observe Memorial Day, the official kickoff to summer in the US.  What better dish than Creamy Coleslaw to celebrate? 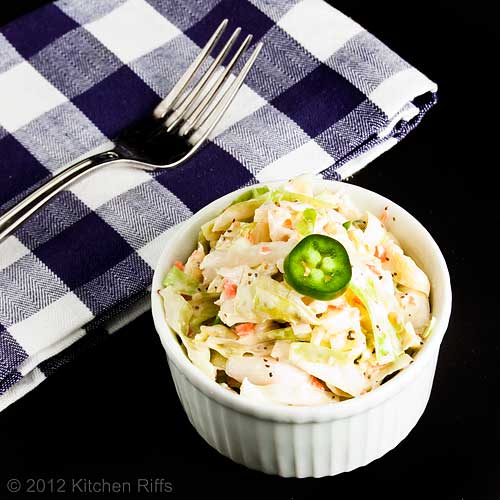 For years, coleslaw was no great favorite of mine. But then I discovered a version with celery seeds as an ingredient, and never looked back. Celery seeds + cabbage + mayonnaise = incredible flavor.

Probably because of those early memories of so-so coleslaw, I never got in the habit of making this dish. I often bought slaw at the deli counter on the (infrequent) occasions when I served it. But then I got serious about making my own — and rethinking the classic renditions. Most basic cookbooks feature essentially the same version. The Joy of Cooking contains a pretty representative example, and mine is adapted from it.

My version adds a hint of horseradish and jalapeño pepper — enough so you’ll know there’s something going on with the background flavor, but not so much that you’ll necessarily be able to identify what it is. You can use more if you want (see the Notes for some suggestions), but I think this recipe is pretty good as written. I also add some sour cream to my mayonnaise, although you can use straight mayo if you wish.

This recipe makes enough to serve 10 to 12. Leftovers stored in an airtight container will keep for 2 or 3 days in the refrigerator (they’ll be safe to eat for up to a week, but after 3 days or so the quality begins to deteriorate). I actually like to make this recipe a day ahead when I have time — the flavors mingle together a bit more. 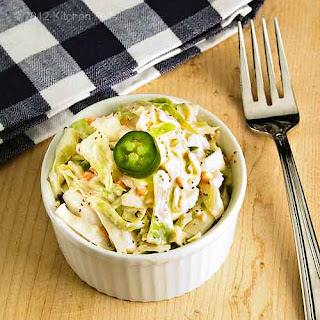 Although potatoes, iceberg lettuce, and tomatoes are the most popular vegetables in the US, green cabbage ranks right up there in the top 10.  (Other favorites are onions, carrots, celery, corn, broccoli, and cucumbers.)  The popularity of cabbage surprised me at first.  But it made sense when I thought about it.  Since cabbage is the prime ingredient in coleslaw — and because coleslaw is almost universally popular — it follows that cabbage would qualify as a widely munched veggie.

Most of us eat coleslaw as a side dish, but sometimes it’s part of the main event.  In the Carolinas, coleslaw often tops barbecued pulled pork sandwiches.

I’m no expert on Carolina barbecue (or Carolina coleslaw), though I’ve sampled it a few times.  My impression is that their slaw is almost always vinegar-based rather than creamy. But then, so was the original coleslaw — at least according to the Food Timeline Organization.

Coleslaw actually dates back to ancient Rome, though we in the US borrowed the name “coleslaw” from the Dutch (they called it ”coolsla”).  Anyway, mayonnaise was an 18th century invention, so it wasn’t until then that creamy coleslaw (the kind with mayo) could have made its first appearance.

Coleslaw achieved wide popularity in the US sometime in the early 20th century, and by then Creamy Coleslaw was by far the most frequently served variety.  Though it seems these days that vinegar-based slaws are making a comeback. 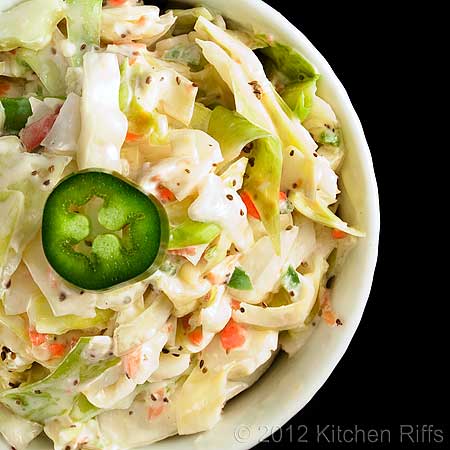 “Fascinating,” said Mrs. Kitchen Riffs.  “Maybe we should do a slaw-off on the blog.  Compare and contrast various types of coleslaw recipes.  Kind of a cavalcade of coleslaw.”

“It’d be fun,” I agreed.  “For creamy coleslaw I think the best recipes are always made with celery seed.  Like mine.  For vinegar-based coleslaw, I kind of favor a German style made with garlic — lots of garlic.”

“No, but it’s a dish I’ve tasted several times.  Back in the days when I traveled a lot.  It’s really good stuff.”  And indeed, during the 1980s and 90s I had a job where I did extensive travel throughout the US.  One of the benefits was the opportunity to sample lots of regional foods.

Mrs K R narrowed her eyes.  “Why haven’t I heard about this dish before?”

That’s when I decided I better get started working on my garlic coleslaw recipe.  But that will be another post.

Email ThisBlogThis!Share to TwitterShare to FacebookShare to Pinterest
Labels: Cabbage, Picnic, Side Dish

Oh yes, Garlic coleslaw is very-very good! I've tried it in several European countries, it's very delicious. I like that you've added some sour cream to a mayo for this coleslaw. I smell summer! :)

Your cole slaw version is very similar to my own! I like to mix in some adobo sauce from a can of chipotle peppers, too; adds a spicy, smoky flavor. Our cole slaw pasts also seem very similar. Although I always loved my moms slaw I much prefer a spicier version. Can't wait to try your version with the horseradish. Sounds heavenly!

Hi Marina, isn't garlic coleslaw terrific? It'll be a couple of weeks at least before I'm ready to post about it, but it's a great recipe. I'm smelling summer too! Thanks for your comment.

Hi wicked noodle, the adobo sauce is a terrific idea - I'll have to try that. Thanks for taking time to comment.

I love cole slaw, but I've never read so much about it before :) for me it was just a salad, delicious of course :) Thank you for an interesting post!

I have never made coleslaw before, but I sure want to try soon. This looks great!

I just had coleslaw from KFC yesterday and was thinking how i could make it better on my own. This could be one of them :D

Hi Marta, sorry if I got a bit long-winded! ;-) As you can tell, I rather like this recipe! Thanks for your comment.

Hi Cathleen, it's an easy recipe, and much better than the store-bought stuff. I hope you enjoy it! Thanks for your comment.

Hi Pencil Kitchen, I haven't had KFC coleslaw for ages, but as I recall it's fairly good, although a bit on the sweet side. Mine definitely has a bit more tang to it. Thanks for taking time to comment.

I usually pass on the coleslaw because it's ho hum, but I think you have really elevated it here. I love heat too, but I think you were right to retrain it. Perfect for the upcoming hot weather we are expecting too.
-Gina-

We do love colesalw in the summer, and did not know it is originating from Rome. Thanks for the great post - Cheers :)

I think horseradish makes everything taste better. The hotter the better, too. OK, I am a horseradish addict, I admit. ;)

Hi Gina, for me coleslaw is one of those dishes that I rarely crave, but once I have some I'm usually glad I did (unless it's of the ho hum variety). And it is so refreshing in warm weather! Thanks for taking time to comment.

Hi Judit and Corina, one of the fun parts of blogging is finding out unusual little facts about various dishes! If you're not familiar with the Foodtimeline.org (link above in the last section), it's fun to explore. Thanks for stopping by.

Hi Carolyn, horseradish is good stuff, isn't it? It's also pretty good in potato salad (with sour cream), although for that dish I like to put in much more horseradish than I do in coleslaw. Thanks for your comment.

I love your added zip! Delicious! Deli and grocery coleslaws are so sad. I llove how we are divided by Hellman's and Miracle Whip - think geographically!

Oh my ... I'm not a coleslaw person, but The Chef would LOVE this! Filing this away when I want to surprise him for dinner one night!

I've never really liked coleslaw, but I'd be willing to try a homemade version if it's as good as you say it is. And I know I'd like garlic coleslaw!

This coleslaw looks like such a delicious variation from the usual - dinner time here I come :D

Hi Claudia, the whole Hellman's vs. Miracle Whip thing is kind of amusing. I'm more a Hellman's person, but Miracle Whip does taste pretty good in some dishes. Thanks for your comment.

Hi Kimberly, I definitely think you should surprise the Chef with this! Let me know how he likes it. Thanks for stopping by.

Hi Jeanne, my Creamy Coleslaw is pretty good, but if you're really not a coleslaw person, I'd hold out for the garlic. It you like garlic, it's heaven! Thanks for your comment.

Hi Zoe, always fun to play with food in the kitchen! Thanks for the kind words, and the comment.

Hi Choc Chip Uru, glad you enjoyed the post! It's pretty good stuff. Thanks for taking time to comment.

Hi love2dine, ;-) It'll only take a few minutes for you to make a batch! Thanks for taking time to comment.

What a wonderful variation of coleslaw. Looks and sounds delicious!

Always live the coleslaw... Ur version is too tempting.... When u find time do drop at my place....

Hi Akila, I'll check out your site. Thanks for the comment.

I love cole slaw and what perfect timing with Memorial Day this weekend. Now i have 2 new recipes to try of yours. Baked Beans and this luscious sounding horseradish cole slaw. Great flavors in this dish.

Hi Vicki, I hope you enjoy the recipes! They're both ones that you can play around with ingredients/quantities to suit your individual taste. Thanks for taking time to comment.

My kids don't like cabbage much but exception is coleslaw! This looks delicious. I've never put sour cream before. I should give this a try. Something different is always good!

Yum!! I'm making some pulled pork for bbq tomorrow and this slaw on top would be smashing!

Hi Nami, coleslaw seems to appeal to a lot of people who dislike cabbage. The sour cream adds a nice tang to this dish, which I find pretty pleasing. Thanks for taking time to comment.

in Italy coleslaw doesn't exist, I tasted it the fist time in London 2 years ago, and I loved it immediately!!! Thanks with your recipe I can replicate at home!! Lovely!! Valentina

Hi Valentina, interesting that coleslaw doesn't exist in Italy - I didn't know that. It's one of those dishes I only eat a few times a year, but I'm awfully glad it's available! I hope you enjoy making it. Thanks for your comment.

I like that you have taken coleslaw to a different level with the horseradish and jalapeño. I can't wait to try your recipe.

Hi Karen, this is a fun recipe to play with. I made it again over the weekend, but added a bit of cider vinegar to it - nice ping! I hope you enjoy the coleslaw - let me know if you do make it. Thanks for your comment.

Love that you've included horseradish to this slaw, John. I make a much simpler version and use it to top pulled beef sandwiches. Next time, I'll give this recipe a try. Besides, I bought too large a size of celery seeds last Fall when I was pickling everything under the sun. It may be self-justification but I do feel a bit pleased whenever I find a recipe that uses some. "Gee, that wasn't such a bad idea after all." :)
Thanks for sharing another of your fantastic recipes. Roman origins. Who knew!

Hi John, horseradish is good stuff! And celery seeds go really well in coleslaw - at least I like them. And I thought the trivia about the Roman origins was interesting, too. So basically coleslaw is an Italian dish! ;-) Thanks for the comment.