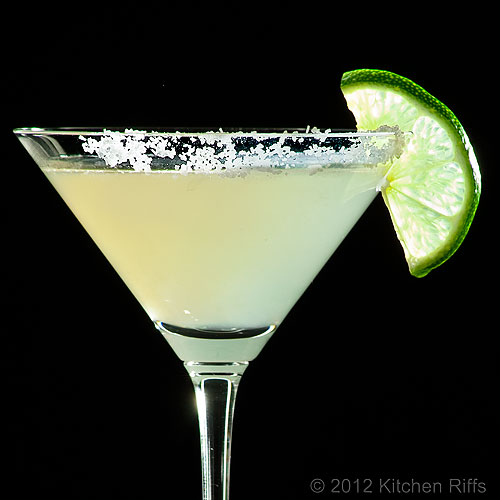 The Margarita gets lots of love in the US. Partly that’s because of its slightly sour — but wonderful and refreshing — lime taste. And partly it’s because the drink has become synonymous with a carefree, easy-going lifestyle. You know, as in Jimmy Buffett’s song, Margaritaville.

With Cinco de Mayo coming up this weekend, isn’t it time to kick back and sip one? You’ve got the thirst. I’ve got the quencher. 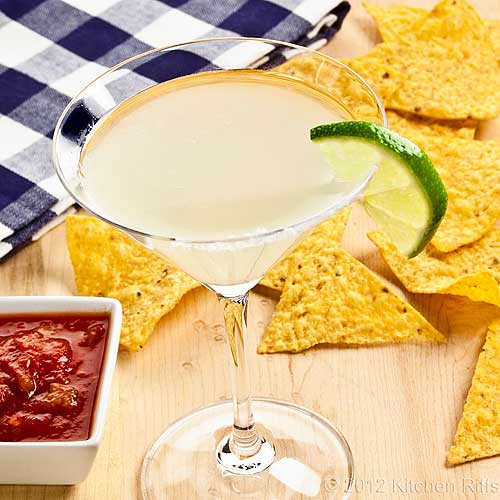 When you say “Margarita,” some people think of the frozen version.  No thank you.  We’re talking the traditional Margarita here.  The one that’s made with tequila, triple sec (an orange-flavored sweet liqueur), and freshly squeezed lime juice.

This classic is chilled in a cocktail shaker and served up — like a Martini.  You can salt the rim of the glass or not (your preference). Or, if you insist, you can serve this elixir on the rocks.  But the frozen version?  It’s a much sweeter drink (sometimes made with strawberries).  It’s a different animal that we’ll discuss another time.

The most important ingredient for this drink is tequila.  You want to use something decent, but not overly fancy.  Tequila is made from the agave plant (a kind of cactus), and the better ones are 100% agave.  Cheaper tequilas are made with 51% agave, with other sugars added in fermentation.  (Fermenting alcohol out of sugars isn’t unusual.  That’s how rum is made, for instance.  But in this case it often produces a somewhat inferior liquor.)

You want silver (Plata) or white (Blanco) tequila, and nothing too old.  You’re looking for a tequila with a slightly rough flavor, not a fine sipping tequila.  Your Margarita should have a pleasantly harsh edge to it.

You’ll see a number of different ingredient ratios for Margaritas.  I’ll give you my preferred mixture (which is one that David Wondrich also likes), but I’ll also discuss some alternate ways to make the drink in the Notes.

This recipe serves 1, and takes 5 minutes to prepare.  Scale up the recipe to serve more people.  Cocktails are best when served immediately after mixing, so if you want another round, I suggest preparing a second batch.

Note that the recipe directs you to shake the drink.  There are three reasons for this: 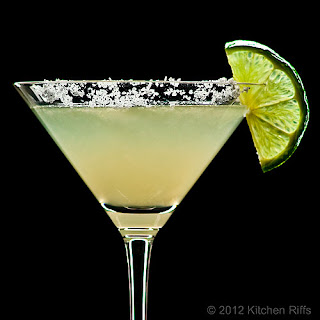 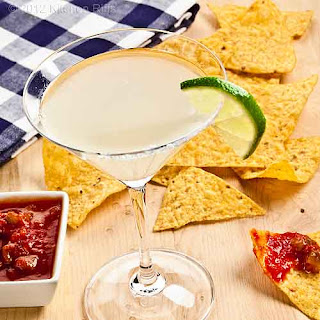 The History (or Mystery) of the Margarita

No one knows exactly how or where the Margarita was born.  But that’s true of many cocktails; their origins often are not well documented.

Gary Regan in The Joy of Mixology summarizes several tales about the Margarita’s origin:
Or whatever. Search the internet and you’ll find other stories.

But one thing is clear: the Margarita is basically a “sour,” like the Whiskey Sour, the Sidecar, and the Classic Daiquiri. All these drinks are made with liquor + citrus (lemon or lime) + something sweet to temper the sourness of the citrus (simple syrup or triple sec).

Which leads us to another story about the drink’s origin. But first, some background: Today we call almost all mixed drinks “cocktails.” In the past, though, a cocktail was just one type of mixed drink. There were also cobblers, daisies, and many others — including sours. The daisy is actually a type of sour — one with just a bit of fizzy water added to the liquor + citrus + sweet trinity that is the foundation of today’s sours. (Add more fizzy water and the drink becomes a “Fizz.” As in, a Sloe Gin Fizz.) All of these drinks evolved as tastes changed. Heck, the original Martini was a sweet drink made with red (sweet) vermouth!

Why is this relevant to Margarita history? Because, as David Wondrich (cocktail historian extraordinaire) tells us in his book Imbibe!, several “tequila daisies” became popular in Mexico during the 1920s and 30s. One that was made with grenadine evolved into what we now call the Tequila Sunrise.

But there was another daisy made with tequila — one that was perhaps even better known, and may have made its first US appearance in Syracuse, New York in 1936. This daisy consisted of tequila, lime juice, and orange liqueur (triple sec). Maybe it had just a bit of fizzy water, or maybe not.

Anyway, it sounds like a Margarita, no? And that’s what people were probably calling it, because the Spanish word for “daisy” is “margarita.” So if thirsty people in Syracuse were ordering this drink by its Spanish name, they would be asking for something along the lines of El Tequila Margarita.

What a mouthful! Why not just say “Margarita” for short? Which may be how people attached the name Margarita to this particular drink. 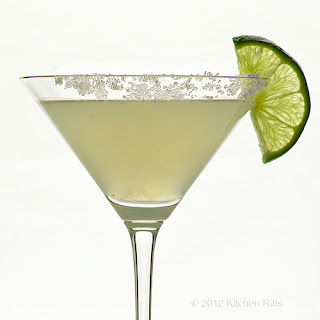 “So,” said Mrs. Kitchen Riffs, “the bottom line is nobody knows anything definitive about the origin of the Margarita.  They don’t even know if it originated in Mexico!”

“No,” I said, upending my glass to get those last few precious drops.  “But does it really matter?

After all, many of our best-known Mexican/Tex-Mex dishes aren’t “authentic,” as we noted when discussing Tacos. And Cinco de Mayo is celebrated much more enthusiastically in the US than south of the border.

“I mainly care about whether a drink tastes good,” said Mrs K R, emptying her glass.  “Which Margaritas definitely do.”  She eyed the tequila bottle.

I took the hint.  “Another?” I said as I reached for the cocktail shaker.

Finally! I think Mrs. KR has the right idea!

Oh man the temptation!! This margarita looks totally awesome and it's making me thirsty. I am about to head to the kitchen and whip up something. I only have gold tequila though :(

Great facts and trivia you posted there! Such a wonderful post all around.

Hi Simply Tia, it is a temptation, isn't it? Alas, gold tequila just doesn't cut it in this drink, although I'm sure you'll think of something else. ;-) Thanks for the kind words, and the comment.

Hi Jay, sounds as if you like this! Thanks for stopping by.

that sure taste good.

I love a good classic margarita (much better than the sugary frozen version), and this looks great! Thanks for sharing all that fun trivia about the drink as well - and all its possible origin stories! Fun.

Maybe this will be "the" margarita I can make that we like!! We've resorted to Skinny Girl Margaritas, which are pretty good and you know I don't usually do pre-made anything, because when I make them from scratch, they just come out awful. Thanks for sharing and enjoy the weekend.

Hi love2dine, it does taste good! And very refreshing. Thanks for commenting.

Hi Katherine, you make a really good point - there are tons of Margarita mixes out there, and they're all w-a-y too sweet. And that's mainly what you find in the frozen versions, at least at many bars & restaurants (there are some that will use freshly squeezed limes in their Margaritas, but they're the exception, not the rule). Anyway, thanks for your comment.

Hi Denise, you can do this! The main trick is finding the ratio of tequila:Cointreau:lime juice that pleases you - and it's mainly balancing the sweet of the Cointreau with the sour of the lime juice. Plus how much tequila you want to taste. Really, it's kind of like making a vinaigrette - it's exactly like balancing the olive oil & vinegar. Thanks for stopping by.

I was having serious margarita cravings yesterday. Can't wait for Cinco de Mayo!

Hi Lisa, only a couple of more days before Cinco de Mayo so you can satisfy those cravings! And of course tomorrow is the beginning of the weekend, so you can start then! Thanks for the comment.

That sure looks good! Have not had a margarita for a while. Thanks for all the tips. The ratios are really helpful.

Hi Biren, it's an excellent drink! Glad you found the tips + info about the ratios helpful, and thanks for taking time to comment.

This is exactly how I order my margaritas! It's funny because when they bring it to the table I remove most of the salt from the rim just like you show it in the beautiful pictures! Great post!

Hi mjskit, a little salt goes a long way! It looks pretty; but usually its flavor doesn't really add to the drink IMO. Thanks for your kind words, and your comment.

Friday and Cinco de Mayo at the right corner, there is no other recipe but margarita which makes everyone happy! Have a great weekend!

Hi Nami, ;-) I totally agree! You have a great weekend, too, and thanks for your comment.

The sun is out, it's Cinqo de Mayo here in Australia and this margarita is MINE!

What a gorgeous coloured drink - 2 years and I am so there ;)

Hi Maureen, enjoy! And thanks for commenting.

Hi OCFoodBlogger, it's really great! ;-) Thanks for stopping by.

Thanks for the little history on Margaritas and now I cannot get the Jimmy Buffett sound out of my head. I am off to get the shaker... and the limes it is 5 ok somewhere. Take Care, BAM

Hi Bam, it's always 5 o'clock somewhere! Sorry about that Jimmy Buffett thing. ;-) Thanks for taking time to comment.