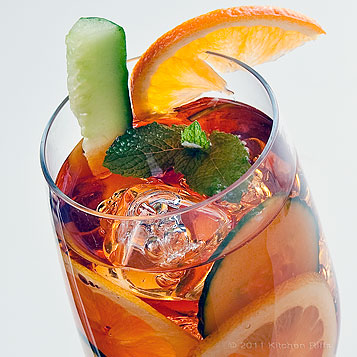 Most people in the United States have never had a Pimm’s Cup.  Many have never heard of it.

But Pimm’s Cup is very popular as a summer drink in England (along with champagne, it’s the official drink of Wimbledon).  It has a relatively low alcohol content, so you can enjoy a couple of tall cool ones at a picnic or sitting out on your patio — and still remain clear-headed.

Best yet, it’s a snap to mix.  With Memorial Day a couple of weekends away, you’ve got plenty of time to lay in a supply of Pimm’s and learn how to make this great-tasting drink. 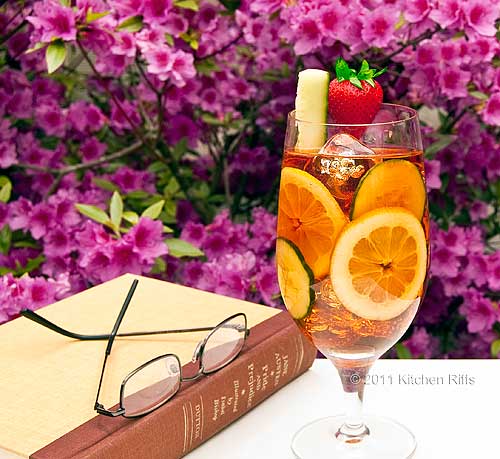 A Pimm’s Cup is made with Pimm’s No. 1 Cup, a gin-based infusion of herbs and quinine.

Any good liquor store will stock it. Just ask for Pimm’s (no one uses the full name, Pimm’s No. 1 Cup). It’s usually shelved with the liqueurs and cordials, although I’ve seen it in the gin section.

This recipe makes one drink. Serve in a tall high-ball or other voluminous glass. 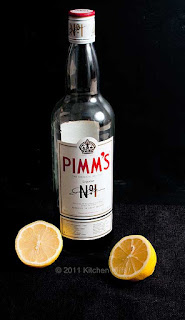 I mentioned that Pimm’s Cup is an “official” drink at Wimbledon. It’s also de rigueur at the Henley Regatta, the Glyndebourne opera festival, cricket and polo matches, and other summer events that tend to draw what the British call “toffs.” So it’s long been associated with the upper classes — you know, the sorts born with extended pinky fingers.

Here in the US of A, though, most of us don’t know (or care) about the class associations. And we don’t need a regatta to enjoy this very refreshing drink. In fact, Pimm’s Cup makes a great accompaniment to backyard barbeque.

It really does rival a gin and tonic (or a beer!) as a summer cooler. Mrs. Kitchen Riffs enjoys Pimm’s Cup so much that she’s happy to order one year-round.

She’s much classier than I am, so that figures. But I really like Pimm’s Cup too, especially now that the weather is heating up. Many a summer evening, you’ll find me out back manning the Weber grill, Pimm’s in hand.

Though I still haven’t figured out how to drink it with my pinky extended. 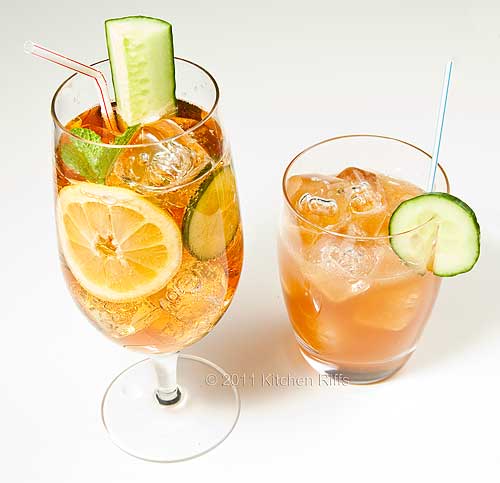 I had Pimms for the first time last summer (in England) and I LOVED it! You are right, it's cool and refreshing without knocking you on your butt:) Thanks for reminding me of this delish drink!

Hi, Lucy, thanks for the comment. It really is an enjoyable drink.

Absolutely gorgeous pictures! I'm looking forward to trying this cocktail this summer. Thanks!

Thanks for the compliment on the pictures, Nicky! It's not only a pretty looking drink, it's great tasting, too!

Two of my best friends live in New Orleans, perhaps the only American city obsessed with Pimm's Cups, and I get my fill every time I visit them. Great recipe and photos. Perfect way to welcome in the warmer weather!

Hi Katherine, thanks! You're right that New Orleans is a great place to get a Pimm's (a Sazerac, too). Thanks for stopping by.

Hello again! Just wanted to let you know that I mention and link to your recipe on a post I did on simple syrups and summer cocktails :-) http://www.katherinemartinelli.com/blog/2011/four-simple-syrup-recipes-and-a-grenadine/

Hi Katherine, thanks for the reference to my post! I've been on vacation the last couple of weeks (Alaska!) so I've fallen behind in my blog reading, so I'll put your blog first on my list. Thanks again.

I always order a Pimm's Cup when I see it on a cocktail menu. Thanks for giving it some more visibility.

Hi FJK, thanks for stopping by! Pimm's Cup is great, isn't it? I've heard from a lot of people who haven't had one before, tried it, and really liked it.

Love my Pimm's Cups! Brings back memories of honeymoon in St. Kitts 20 years ago. Up there with Negronis in my book.

Hi Baba, Pimm's Cup is a great drink. Haven't had one yet this season, but I'm sure I will soon. The Negroni is also lovely, particularly in warm weather (pretty good in cold weather, too!). Thanks for taking time to comment.

Hi Suborna, this really is a swell drink, and perfect for warmer weather! Thanks for the kind words, and comment.

Another fantastic, classic cocktail. I'm glad Anne told me about your site, you've got some great drink posts and with a 4 day weekend upon me I think I may need to try as many of these as I can. Cheers!

Hi loafofbeer, the Pimm's cup is a wonderful drink! Worth a 4 day weekend in itself. ;-) Thanks for the comment.

I have to try this cocktail! Sounds really refreshing and I love trying something new...well, new to me anyway! Nice post!

Hi Marcelle, this is a terrific drink! Loads of flavor, and very refreshing. Thanks for the comment.

I've been drinking Pimm's for decades, and I completely agree with you about using freshly squeezed lemon juice, simple syrup and seltzer instead of a sugary (make that HFCS'y!) lemon-lime soda.

Hi Jean, love freshly squeezed lemon juice! And it's wonderful in a Pimm's. :-) Thanks for the comment.

I consider myself extremely lucky, because I was introduced to pimm’s in 1979. It was right after I moved to Dallas for my first job, which is why I remember - i moved in ‘78 but it took me a while to make friends, and one turned me on to pimm’s. I wasn’t even a drinker back then, but who couldn’t love pimm’s?!! When I went to London with my daughter when she moved there, I made sure one of the first drinks we had was Pimm’s. I also discovered summer cup there.

Hi Mimi, you discovered Pimm's way before I did! It's such a good drink, isn't it? We have a Pimm's at least once every two or three weeks during warm weather -- one of our favorites. Thanks for the comment.

I saw this on your sidebar and jumped back a handful of years I see. The picture was calling to me so I had to check it out. Not only have I never had it, but I've never even heard of it. I'll be on a mission to have one before summer ends. :-) ~Valentina

Hi Valentina, this is SO worth trying! One of our favorite drinks. :-) Thanks for the comment.