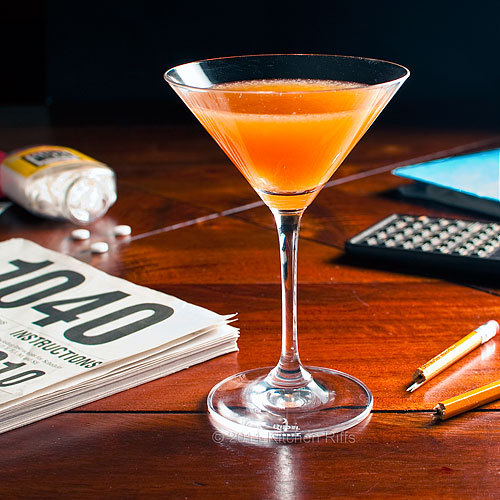 A Classic Cocktail as April 15 Approaches

“April is the cruellest month” — that’s what poet T. S. Eliot wrote.  Anyone who’s struggling with a tax return will be tempted to agree.

It’s a shame that a month like April — when the weather is finally beginning to turn pleasant — finds so many of us indoors working on taxes.  Cruel indeed.

So when you’re finally finished with this yearly burden, why not celebrate (or console yourself) with a cocktail?  And what could be more appropriate than the Income Tax?

As is the case with many classic cocktails, the origins of the Income Tax are obscure.  It probably began as a variation on the Bronx cocktail (it’s the same recipe, but with the addition of Angostura bitters).  The Bronx was extremely popular in the pre-Prohibition era, although some of the more hardcore drinkers considered it “weak” because it contained orange juice.  Sort of the way some people today regard the Cosmopolitan as a “girly” drink.

Speaking of orange juice, try to use fresh squeezed, not the pre-made stuff, when you mix an Income Tax (or Bronx) cocktail.  It really makes a difference.

This recipe yields one drink. 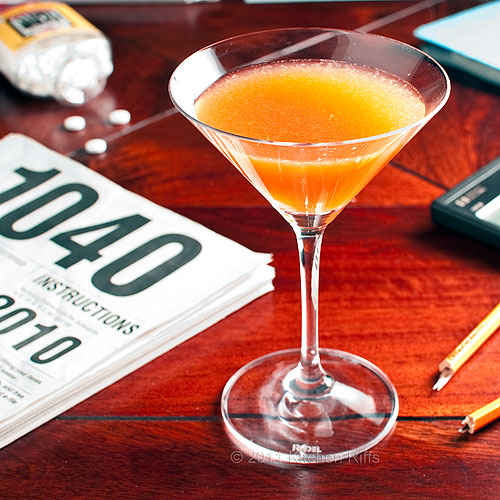 Combine ingredients in a cocktail shaker that is half filled with ice.  Shake well for 20 – 30 seconds.

Strain mixture into a cocktail glass.  If you want a garnish (I usually don’t), add an orange wheel to the rim of the glass (or toss an orange twist into the glass).

Notes About the Recipe

Many classic cocktails flourished before the enactment of the Volstead Act, the 1919 legislation that enabled the Eighteenth Amendment to the U.S. Constitution, which established prohibition in the United States. Prohibition ended in December 1933, when the Twenty-first Amendment was enacted.

Drinking didn’t disappear during Prohibition, of course, but it did change. Some ingredients became difficult to obtain, and many people started craving simpler drinks (a highball rather than a mixed drink, for example). As a consequence, some of the cocktails that used to be popular became less so, and some were simply forgotten.

Others lost popularity, but are now enjoying a renaissance on many cocktail menus. The Corpse Reviver, Pegu Club, Aviation, Jack Rose, 20th Century Cocktail, and Clover Club are just a few examples.

And then there are the “classic” cocktails that comparatively few people know about today. I’d include the Bronx, the Brooklyn, the Monkey Gland, Satan’s Whiskers, The Seelbach, and Brandy Crusta in this category. And of course the Income Tax.

There’s a wealth of information available about cocktails and their recipes. The online sources I usually consult first are Robert Hess’ DrinkBoy and Martin Doudoroff and Ted (Dr. Cocktail) Haigh’s CocktailDB, the Internet Cocktail Database.

For a good historical introduction to cocktails and their recipes, I recommend David Wondrich’s Imbibe!. Ted Haigh does a great job on classic cocktails, particularly some of the more obscure ones, in Vintage Spirits and Forgotten Cocktails.

For a general introduction to cocktails and how to mix them, I recommend Gaz (Gary) Regan’s The Joy of Mixology or Dale DeGroff’s The Craft of the Cocktail. By the way, one of DeGroff’s many claims to fame is that, while at the Rainbow Room in New York City, he popularized “a definitive recipe [for the Cosmopolitan Cocktail] that became widely accepted as the standard.”

Ever since we discovered the Income Tax Cocktail, it’s become a yearly ritual for Mrs Kitchen Riffs and me to drink one when we’ve completed our tax return. We always forget what this cocktail tastes like, so we “rediscover” it every year about this time.

I think it’s a decent enough drink. Not one I’d want too often – once a year is perfect! – but tasty.

Mrs Kitchen Riffs? Well, after the first healthy sip, a look of dawning memory generally starts to cross her face. She then takes another dainty sip or two and comments on how interesting the flavor is.

What she means is she’d really rather have something else. I always volunteer to fix her a substitute drink — an offer she happily accepts.

Not wanting the extra glass to go to waste, I always have my Income Tax and hers too. Which works for me. At tax time, I usually need a double.

Should you have one? If the drink sounds appealing — and you have the ingredients at hand — I’d definitely give it a try. You’ll be drinking a piece of history, and the cocktail has its refreshing qualities. Even Mrs Kitchen Riffs doesn’t dislike it — she has consumed her entire drink on more than one occasion — it’s just not her favorite.

And because it’s ritual, I’m quite sure that next year, once we’ve completed our taxes, we’ll be celebrating (or consoling ourselves) again with an Income Tax Cocktail.

Two, actually. One for me and the other for — well, me. Yummy! That looks delish! Love the photo, too- that's pretty much what my desk looks like right now (minus the cocktail because I have to pay the gov't this year)

Beautiful drink and I love the idea of finding/recreating historical recipes!

Kathryn, thanks. Glad you liked the photo - I actually took that right after I finished my taxes!

Errin, thanks for the compliment. I'm fairly new to blogging, and I'm finding that learning how to take decent food photos, though challenging, is a lot of fun.

QuincesandthePea, thank you. I really enjoying finding old recipes and reworking them, so you'll certainly see more from me from time to time.

Even though I've never been much of a drinker this sounds tasty and I love the color. In some way it could pass as an autumn beverage. Fun info. Thanks for sharing!

Hi Vicki, you're right, the colors are autumn-like. Maybe for Halloween? The thought of taxes is certainly scary enough! :-) Thanks for commenting.

I'm coming over from your 2012 post and just want to say THANK YOU for answering my question as to why tax day is on the 17th this year! I'm shocked at the reason, but at least now I know. Now for the cocktail - thank goodness the liquor stores are open tomorrow so I can pick up the bitters and the sweet vermouth! :) Great cocktail and congratulations for it being posted as a top 3 on Gojee!

Hi mjskit, glad I was able to help! And I hope you enjoy your cocktail - it's a yearly tradition at our house. Thanks for your kind words, and for taking time to comment.

I enjoy cocktail a lot but I don't normally mix it at home mainly because my small apartment is too small to have a shelf for liquors. But I thank you for the recipe because I know I'll like this drink just by looking at the ingredients. Hopefull one day I'll have a small bar in my own place (keep on dreaming lol). Love your picture on that glass!

Hi Yi, not enough space for liquor bottles? A tragedy! :-) You should order one of these when you're out sometime - a great drink. Thanks for your kind words, and your comment.

Had to comment on this one, even though tax pain season is over for one more year. Wish I would have seen this in April, but no worries I will archive for next tax pain season. I love it!!:)

Hi Alessandra, it's actually a pretty good summer cocktail too - the OJ - but definitely a great cocktail to "celebrate" tax day. ;-) Thanks for the comment.

Love the name of this and the aspirin bottle in the photo is cracking me up. Love this.

Hi Kim, I really like the aspirin bottle too. ;-) I had a lot of fun shooting this photo! And the drink is worth trying. Thanks for your comment.

Hi Judy, it is! Thanks for commenting.

Hi! I found a few versions of this cocktail online, but yours looked the best. I just posted it tonight on my blog and linked back to yours! Thanks for the recipe. Cheers!!

Hi Cocktail Lady, glad you enjoyed this version! I'll definitely check out your post. Thanks for the comment.