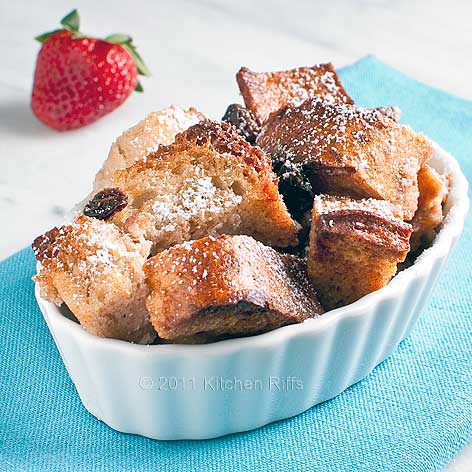 Bread pudding is right up there on my list of comfort foods.  Lots of smooth custardy carbs sharpened by raisin and cinnamon highlights.  A touch of dark rum (some prefer bourbon) to provide a bass note.  Maybe a bit of powdered sugar on top for extra decadence.  What’s not to like?

Well, all that great flavor does pack a few calories.  And my scale groans a bit if I overindulge.  So bread pudding is an occasional treat for me (and, I suspect, for many of us).  Which means when we have this dish, we want it to be really, really good.

Fortunately, Mrs. Kitchen Riffs — who is the dessert supremo in our household — has a deft hand when it comes to mixing up a batch of bread pudding.

Make that a mean batch of bread pudding. 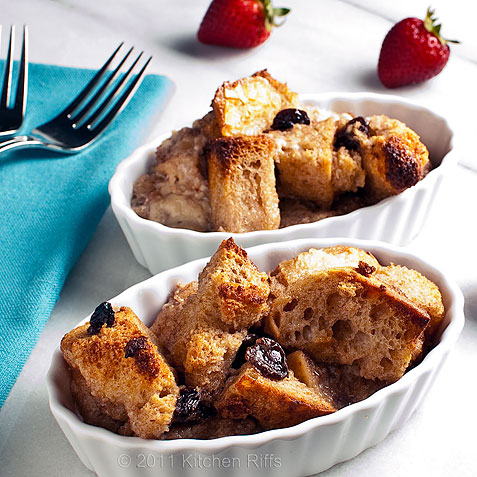 Note:  This recipe (including notes) is written by my dear wife, Mrs. Kitchen Riffs

Bread pudding seems to have been around forever.  Which is not surprising, since it’s a great way to make something tasty out of bread that has gone stale. This recipe is very loosely based on one from my tattered old Fannie Farmer cookbook.

Bread pudding is one of my favorites, but most recipes I’ve encountered over the years are way too sweet.  Some recipes call for a cup of sugar to every cup of bread.  Even worse, many recipes assume you’ll be smothering the pudding in a treacly sauce.

That much sweetness just overwhelms the dish.  My recipe cuts the sugar down to a level that makes the pudding appealingly sweet, but not cloying.  And I don’t think it needs a sauce topping — to my mind, the taste of the pudding is interesting (and satisfying) enough all on its own.

You’ll need a 2-quart baking dish for this recipe.  The recipe yields 6 – 8 servings. 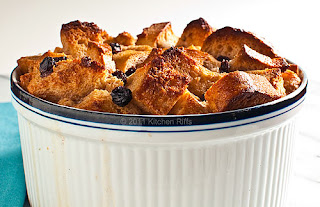 Mrs. Kitchen Riffs says this recipe reminds her of me:  “Crusty, with lots of goodness underneath.” (Aw, shucks.)

She wants to say more on this topic, but I think I’ll stop her right there.  We promised this wouldn’t be too sickeningly sweet. 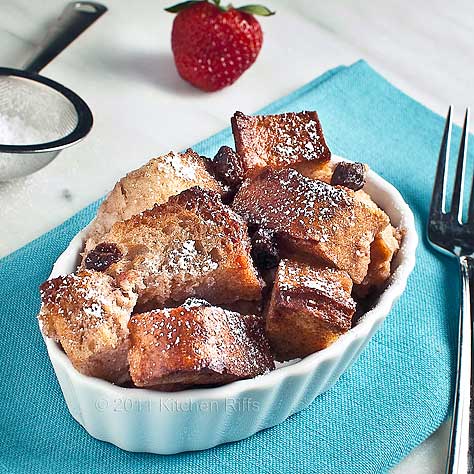 Homemade Meringues
Strawberry Sauce
Posted by Kitchen Riffs at 9:58 AM

Beautiful photos! This looks like a wonderful dessert that would just make you feel all warm and happy inside. I have a sweet treat linky party going on at my blog and I'd like to invite you to stop by and link your bread pudding up. http://sweet-as-sugar-cookies.blogspot.com/2011/04/sweets-for-saturday-14_22.html

Hi Lisa, thanks for stopping by and leaving such a nice comment. I'll certainly check out your blog. Thanks.

This post is awesome! I was watching t.v. earlier tonight and got a crazy hankering for bread pudding.. I'd never made it before so I typed in easy bread pudding into foodgawker and found this recipe. It's delicious!!! I'm pretty proud of myself for getting it right. Thanks!

Hi Maria, thanks so much! I'm glad you enjoyed the recipe - it's one of my favorites. Thanks for taking the time to comment.

Bread pudding is always a favorite of mine. Annie Gunn's used to serve a bread pudding made with banana bread. Extra rich and yummy. Cyrano's has a delicious caramel sauce. I make my bread pudding with left over challa bread, which is a rich egg bread that Jews eat on Friday nights to celebrate the Sabbath. Challah makes great French toast too.

Hi Dean, you're so right about challah bread making superb bread pudding and French toast. Thanks for the info about Annie Gunn's and especially Cyrano's - we haven't been to Cyrano's and it's supposed to be super for desserts. Thanks for your comment.