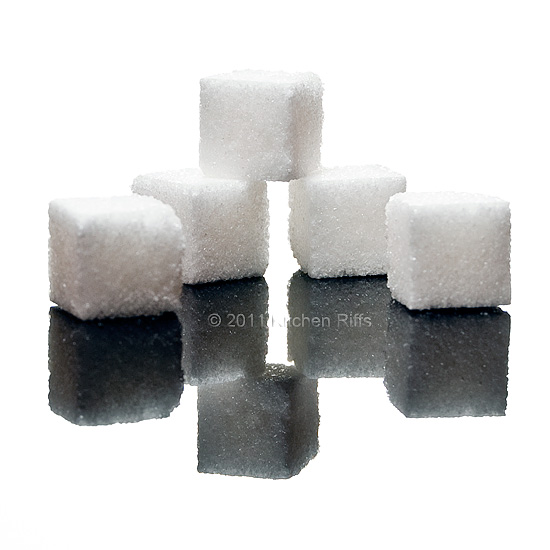 Sugar has a split personality.

On the up side, it tastes good — really good.  A small amount can enhance and highlight flavors in many foods, making them sparkle.  It can also mute the harshness in foods that are too acidic (some tomato sauces, for example).  And in baking it has a myriad of uses, including tenderizing (it often replaces fat in “low fat” foods for just this reason).

On the down side, sugar’s detriments are only too well understood.  It’s highly caloric and of minimal nutritional value.  Some think it’s addictive.  And — oh, heck, if you aren’t already mentally listing a dozen “problems” with sugar, you aren’t half trying.

So should we embrace sugar for its positives or banish it for its negatives?

Well, the Kitchen Riffs household believes in moderation.  We don’t always practice that philosophy, mind you, but we believe in it.  So we use sugar, at least sometimes.  When it comes to sweetening cold drinks — especially lemonade or the stray cocktail — we like to use Simple Syrup, which is basically just sugar and water.

Simply Syrup has great natural flavor and it dissolves instantly in a drink.  It’s also one of the easiest recipes around.  I’m sure there will be no divided opinions on that issue.

Dissolve ordinary table sugar in an equal quantity of water.  Place in a bottle, store in the refrigerator.

That’s it — the entire recipe!  And use granulated sugar.  The pictures show sugar cubes because they're fun to photograph.

Often, the recipe instructions you see will specify a cup each of sugar and water, which yields 1½ cups of syrup.

Notice I didn’t say 2 cups of syrup.  What happened to the “missing” half cup?  Well, if you were paying attention in high school chemistry, you’ll recall that as sugar dissolves, its molecules start to occupy some of the previously empty spaces between the water’s molecules.  (Or maybe I wasn't paying attention and it's the other way around!  See comment from August 7, 2013.) So the sugar solution you end up with is more dense than water alone would be, but not that much greater in volume.

I like to keep Simple Syrup in a squeeze bottle, which makes it easy to dispense.  So I make my syrup right in the bottle.  And I don’t measure anything.

I fill the bottle about ¾ full of sugar (to counteract that molecule thing), then top it up with hot water (which I heat in an electric kettle).

Then I stir with a long-handled spoon or chopstick.  Sometimes I cap the container and shake.  You’ll find as the sugar dissolves that you’ll need to add more water (molecules again).  When the liquid is clear and I don’t see any sugar crystals, I know the sugar is completely dissolved and the syrup is “finished.”

This is really all you need to know.  But you probably have some questions.  Luckily, I have a few answers. 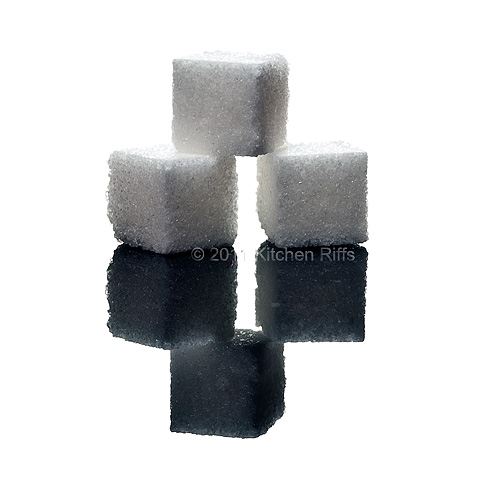 Should You Simmer the Sugar in the Water to Help It Dissolve?

Many recipes for Simple Syrup suggest bringing the sugar and water mixture to a boil and simmering it for a few minutes (no more than 5).  This does help the sugar dissolve somewhat faster, particularly if you are making Rich Syrup (see next section).  But it’s also extra trouble and mess.

You can actually make Simple Syrup with cold water.  It will just take a little longer.  As described above, I usually heat water in a kettle, and just add it to the sugar.  It’s not necessary to boil sugar and water together.

The Difference Between Simple Syrup and Rich Syrup

Many bartenders and cocktail blogs prefer Rich Syrup.  In fact, Darcy O’Neil’s Art of Drink calls it “pretty much standard for most cocktails.”

But I don’t care for Rich Syrup myself.  I find that it’s too easy to over-sweeten drinks when using it.  And once a drink is too sweet, it’s hard to “fix” it.

With Simple Syrup, you’re more likely to under sweeten — but that rarely creates a problem.  It’s easy enough to add a few drops more syrup.  Besides, the extra volume that a leaner sugar solution adds to the drink gives you a larger drink without adding more alcohol.

By the way, a teaspoon of syrup (whether simple or rich) does not equal the sweetness of a teaspoon of sugar.  Darcy O’Neil (who trained as a chemist) explains that to achieve the equivalent sweetness, you need approximately 4 parts sugar to 3 parts water (a ratio of about 1.33:1).

Should I Measure the Sugar and Water by Weight or Volume?

If you’re bound and determined to measure your sugar and water and use the simmering method, you can either weigh or measure by volume.  When you measure by volume, you’ll end up with a slightly weaker mixture — because 1 cup of sugar weighs slightly less than 8 ounces and 1 cup of water weighs slightly more — but the resulting syrup will be good enough.  This isn’t chemistry class, after all; you’re not going to be graded.

By the way, to prove to myself (and to you) that my no-measure method of making Simple Syrup is sufficiently precise, the last time I made it I weighed all the inputs.  I made my syrup in a 10-ounce squeeze bottle that weighed one ounce when empty.  I added 7.5 ounces of sugar to the container, which filled it to approximately the ¾ point.  I ended up adding 7.25 ounces of water.  This gave me a slightly richer ratio than 1:1 (1.16:1, to be exact), but one that was good enough for my purposes.

What Container Should I Use to Store Simple Syrup?

You can store Simple Syrup in anything with a lid.  I use a plastic squeeze bottle because it’s easy to squirt the syrup into whatever needs sweetening.

Just make sure your container is clean before you add the sugar and water, because you don’t want to speed spoilage (see next section).  I always run my container through the dishwasher.  Most dishwasher detergents contain chlorine, which is an excellent sterilizer.

How Long Will Simple Syrup Keep in the Refrigerator?

Sugar is a natural preservative (think glacé fruit), so Simple Syrup keeps for a while in the refrigerator.  Eventually mold will begin to grow, however.

Some people add a bit of vodka (a tablespoon or two) to Simple Syrup to retard spoilage.  But I always use my syrup quickly enough that I’ve never encountered mold.

Camper English tested how long you can store Simple Syrup before it starts to spoil, and wrote about it on his blog, Alcademics.  He found that Simple Syrup lasted a month in the refrigerator.  With a tablespoon of vodka added to the bottle, it lasted 3 months.  Rich Syrup lasted 6 months because of its higher sugar content (even longer with added vodka).

So if it takes more than a month for you to use your syrup, either add some vodka to it (not Grey Goose — use the cheap stuff) or just plan on making a new batch each month.

For Cocktails, the Best Solution

Cocktails are almost always served cold.  But it takes a while for granular sugar to dissolve in cold liquids.  So how to sweeten a cocktail?  Simple Syrup is the best solution.