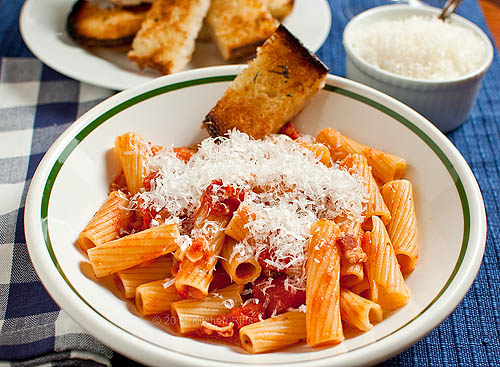 Two of the more famous tomato-based pasta sauces can be found in pasta all’arrabbiata and pasta all’amatriciana.

Pasta all’amatriciana, which originated in the Italian town of Amatrice, adds guanciale or pancetta and (usually) onions to the mix.  But it leaves out the garlic.  Guanciale is salt-cured pork jowl and pancetta is salt-cured pork belly — it’s like American bacon, except that it’s unsmoked and contains no sugar (which often is added to bacon).  The traditional pasta for all’amatriciana is bucatini.  This shape is similar to spaghetti, but has a small hole running down the center of the pasta strand.

Both of these sauces are excellent and quick cooking, and either one makes a great topping for pasta.  But I like to mix the two recipes together to form a sauce that (to me at least) is even tastier. 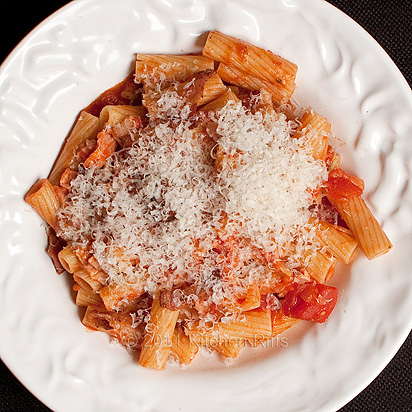 Recipe: Pasta with Tomato and Bacon

Essentially, this dish is pasta all’amatriciana on steroids — with the addition of the garlic typically found in pasta all’arrabbiata.

I’ve been cooking variations of this recipe for over 20 years. I don’t remember where the idea came from, but I'm sure it was not original with me. There are so many riffs on both pasta all’arrabbiata and all’amatriciana that, somewhere along the line, somebody probably combined them and wrote about it.  I probably got the idea while reading Giuliano Bugialli’s Bugialli on Pasta (link is to current edition; original edition published in 1988). My recipe is similar to his all’amatriciana. Or maybe I tasted the dish in a restaurant. No matter — it’s an excellent way to serve pasta.

This recipe yields enough sauce for 1 pound of pasta (which will serve 4). The sauce freezes well, so I often make a double batch.

I usually prepare this recipe in a wide-bottom saucepan or Dutch oven (3 – 4 quarts).

I usually sauté the bacon in a frying pan and sauté the onions in the saucepan I’ll use to cook the sauce.  This speeds preparation and allows me to more easily control how much bacon fat I add to the sauce, but it makes for more cookware to wash.  See notes if you prefer to prepare everything in just one pan.

The Difference Between Italian and Italian-American Pasta Dishes

This recipe is very Italian-American rather than classical Italian.  How can we tell?

Well, first off, it calls for both garlic and onion.  This combination is familiar in Italian-American tomato sauces, but seems to be quite rare in classical Italian cooking.  One often finds either garlic or onion in Italian tomato sauce, but not both together — at least not in any Italian cookbook I’ve read.  (Perhaps I just haven’t read enough cookbooks written by Italians?)  I really enjoy the garlic-and-onion combo, so it makes frequent appearances in my recipes.  This may constitute a terrible faux pas (or passo falso) in Italy, so any Italians who find my blog should feel free to roll their eyes and consider me a barbarian (I expect they’ll be too polite to upbraid me in the comments section).

Second, the sauce/pasta ratio in this recipe is more skewed towards “sauciness” than is usually the case with Italian recipes.  Early Italian immigrants to the United States probably found many sauce ingredients (particularly meat) to be more plentiful — and less seasonal — than was the case in Italy.  So they did what any smart shopper does at the market:   They bought and used a lot of what was available.  Thus, over time, some sauces probably became heartier and were served with a heavier hand than they had been in the “old country.”

More to the point, pasta in the United States is usually considered a main course.  In Italy, it’s more often a preliminary or primo (slotted into the menu after the antipasto and before the main course).  A heavily sauced dish might be inappropriate for a primo.   But for a main course?  You want substance, so bring on the sauce.

What does all of this mean?  Probably nothing.  Tastes vary.

I grew up eating “Italian” food that was in the Italian-American tradition, so that’s what I (and probably many people in the United States) prefer.

But then I’m a barbarian. 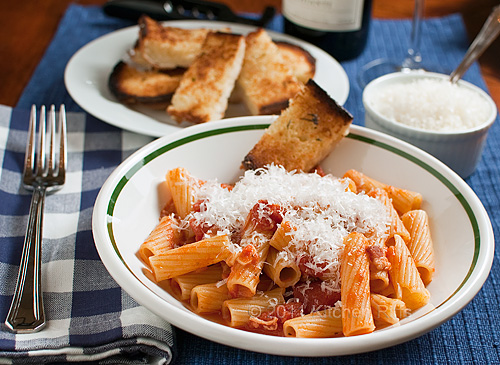 I absolutely love spicy tomato sauce on my pasta - this looks delicious! I'd love for you to submit this to the M&T Spotlight at http://www.makeandtakes.com/spotlight

How is it that it's breakfast time and all I want is this!??!

Great blog; happy I found you!

Thanks for your kind comments!

BTW, I hate to admit it, but leftover pasta is a great breakfast dish . . .

Hi Sara, thanks for the comments. This really is a good sauce, one of my favorites. Glad you enjoy the photographs.

Really good! I made the recipe, appreciated the tips and recommend this to anyone who likes good food, added advantage, delicious in a short time frame!

Hi Cheryl, thanks for your comment. Glad you enjoyed the recipe. It's one of my favorites for a quick pasta dinner.

Argh - no chilli flakes - just chilli power in house. How much should I use?

Hi Anonymous, I assume by chilli powder you mean chili powder, that blend of dried chilies and spices such as cumin, coriander, etc. that one uses in the Mexican dish, chili? You could use that, but the flavor profile is going to be different. Frankly, I'd skip it, and just do without the "ping" the pepper flakes give it. However, if you have "chile" powder on hand - the dried powder of the chile plant (red pepper flakes) - you could substitute that. How much to use? Depends on how hot. For cayenne pepper, I'd use no more than 1/4 teaspoon. Best suggestion is to add just a bit, taste, then add a bit more after the sauce has cooked a bit if you haven't add enough.

Much more here than you really need to know, I know. I actually discuss in some detail the difference between chili powder and chili powder in my post on Vegetarian Chili.

I'm so glad I found this recipe! I'm taking part of a blogger cooking challenge and this month's challenge was finding a spaghetti dish that another blogger made. I found this and thought it was perfect and just what I was looking for! The cooking challenge is set and scheduled for March 7th, so if you get a chance, stop on by and hopefully, it will bring traffic to your blog as well :) Thanks for the recipe, it was delicious!

Hi Chels, good luck with the challenge! I'll definitely stop by your blog and check it out. Thanks for using my recipe, the pin on Pinterest, and for your comment.