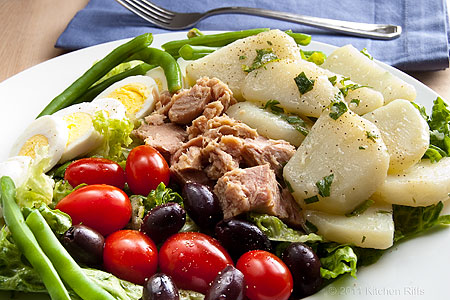 Serve this Summer Classic as a Main Dish or Appetizer

Salade Niçoise was born in the French coastal Mediterranean city of Nice. The original Niçoise salad reportedly was a simple affair of largely uncooked ingredients: lettuce (though some insist the original didn’t include this), black olives, sliced tomatoes, bell pepper, anchovies, and sometimes artichoke hearts. These ingredients were tossed with olive oil (no vinegar), minced garlic, and perhaps some herbs. The dish was served in small hors d’œuvre portions, often with a garnish of sliced hard-boiled eggs.

Over the years, peoples’ tastes evolved, and so did the recipe. In the United States today, Salade Niçoise is usually a substantial composed salad that may also include green beans, potatoes, and canned (or seared fresh) tuna.

In its modern form, Salade Niçoise makes a generous (but not heavy) main course, perfect for hot summer weather. With the addition of some good quality bread and a nice wine, it’s a great company meal. 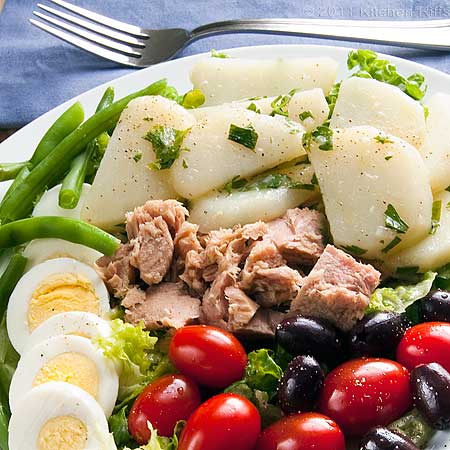 This recipe serves 6 as a main course or 12 as a starter. You can easily adjust the quantities to meet your needs. My recipe riffs off numerous other versions, but owes the most to Julia Child, who offers several recipes for Salade Niçoise in her various cookbooks. In my opinion, her best and most complete discussion of this dish can be found in From Julia Child’s Kitchen.

For the Salad:
For the vinaigrette: 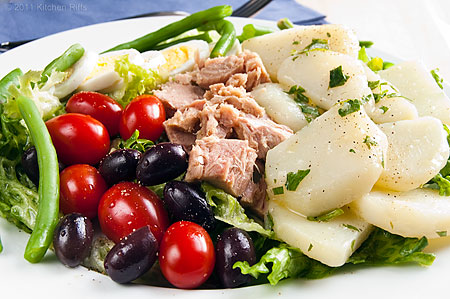 This recipe is about as standard a version of Salade Niçoise as exists today. That said, however, there is much dispute about what the “authentic” dish should contain. The inclusion of potato salad in particular seems to exercise some purists, who consider potatoes to be sacrilege in this dish. I don’t know why. But then, I usually don’t understand the purity police. I happen to like potatoes in Salade Niçoise, so I always include them.

If anyone is inclined to get incensed about that, I would refer them to George Auguste Escoffier, who is credited with standardizing French cuisine, and whose recipes form the backbone of much modern French cooking. Escoffier was born in a village near Nice, and he began his cooking career (at age 13) in one of the city’s better restaurants. Given this background, I would say his pronouncements on Salade Niçoise carry some culinary weight.

In his Le Guide Culinaire (the bible of traditional French cooking), Escoffier decrees that among other ingredients, Salade Niçoise should contain “equal quantities of diced French beans, diced potato and quarters of tomatoes.” He omits tuna, but considers anchovies a must.