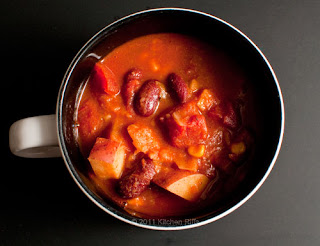 I lived for a spell in Texas.   There I learned the canonical Texas chili liturgy.

The dish contains chilies, obviously, and in quantity.  Probably onions and garlic (though some purists insist that spices can include only cumin, coriander, and oregano).   Salt and pepper.  Maybe tomato, in moderation (we’re not making stew here).

Definitely no beans.  Unless you feel like it, of course.  You’re a Texan, dagnab, so you have the God-given right to eat your food how you like, even though your curious bean hankering may make you a social pariah.  If you persist in this peculiar craving, kidney beans are the best choice (preferably dark red).  Pintos will work too.

And meat.  Always meat.  Coarse ground or hand cut into ½ inch cubes.  Beef is typical.  But there’s also pork, goat, venison, buffalo.  You name it, it almost certainly has been made into chili.

That’s it.  No additions.

Vegetarian chili?  Perish the thought.  It might be a tasty dish, but to call it chili would be nothing short of blasphemy.

Well, as Huck Finn said, “All right then, I’ll go to hell!”  Because vegetarian chili, done right, is excellent — and much less heavy than the meat version. 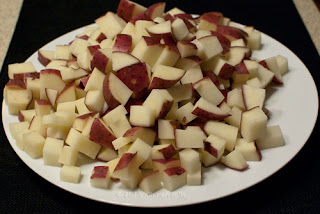 Before I go any further, I have to talk about potatoes.

You don’t see potatoes used in chili too often.  In fact, I considered the idea downright weird when I first encountered it at El Acapulco restaurant in Norwalk, Connecticut.

In the mid-1980s, I accepted a job in New York City, and moved from Texas to the commuter suburbs of Connecticut (my wife found a job in the city soon after our move).  We enjoyed living in Norwalk, which sits on Long Island Sound.  But we missed Texas cuisine, particularly Tex-Mex.

Occasionally as we walked home from the Norwalk train station down Washington Street, we’d stop at El Acapulco.  This restaurant wasn’t particularly good.  But we were fresh from Texas, and desperate to sate our cravings for jalapenos and tortillas.  The menu listed dishes that at least sounded familiar (enchiladas, burritos, mole), even if the flavor wasn’t exactly authentic.  At that time, there were no Tex-Mex or Mexican restaurants of any particular note in the New York City metro area — or at least none that we could find.

One Friday night I ordered chili.  What I got was essentially a bowl of beef stew flavored with chili powder.  Think big chunks of meat (1 by 2 inches) in a thin broth, along with hunks of potato (and carrots, too, as I recall).  It wasn’t very good.  The meat was tasteless, and although there was some chile flavor in the broth, there was little heat.  The potatoes were actually the highlight of the dish – they combined remarkably well with the chile flavor.

It certainly wasn’t a dish I’d ever want to recreate.  But I remembered those potatoes a few years later when I was preparing chili for a group that included some vegetarians.

I was looking for meat-free chili recipes, and having a hard time finding one I liked.  Most of the recipes called for a medley of vegetables, and ran to the fussy in preparation.  “Medley” recipes can be good, but there’s a danger that the flavors will all run together so that the finished dish tastes of nothing in particular.

I decided to base my veggie chili on potatoes, combined with typical chili ingredients.  The idea was that potatoes would replace meat.

The dish was a great success.  The recipe I present here reflects years of tinkering with that first basic recipe.  It’s easy to make. 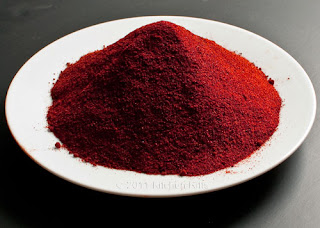 A Word about Chile and Chili

In New Mexico, where many of our chile peppers are grown, the words chile and chili have different meanings.

Chili is a dish (as in the recipe we’re about to discuss).  Chile refers to the pepper plant; the plural is chilies.  You can have either fresh chilies, or dried.  When you dry the plant and grind it up, you produce chile powder.  Chile powder contains nothing but chilies.  Chili powder is a mixture of herbs and spices that includes ground up dried chilies, and is used for flavoring the dish called chili.  Got that?

In much of the United States, the word “chili” is used for both the dish and the plant.  But not on this blog.  I go into so much detail because my recipe calls for chile powder, not chili powder, and we all need to be on the same page here.

Dried chilies are available either whole or ground into powder.  Many aficionados prefer to use whole chilies.  But cooking with them requires a bit more time and knowledge than the powdered version, so for this recipe we’ll be using chile powder.


Many different varieties of chile plants can be dried and ground into powder.   Two of the most popular and widely available are ancho and chipotle chilies.  Anchos are only mildly spicy, with a full chile flavor.  Chipotles are the smoked, dried versions of fully ripe (red) jalapeno peppers.  Their heat quotient ranges from medium to medium-hot and they have a great smoky flavor.

You may be able to find these ground chilies in your supermarket.  Spice Islands (a widely available brand) sells versions of both.  Otherwise, there are many mail order sources.  Penzeys Spices has several varieties of chile powders available.

Sometimes chilies are distinguished by the location where they are grown, rather than by botanical variety.  For example, the town of Hatch, New Mexico bills itself as the “Chile Capital of the World” (and they have a famous Chile Festival every year).  Frequently, their dried chilies are marketed by heat level (“Hatch Mild,” “Hatch Medium Hot,” etc.).   Currently, I’m cooking my way through an assortment of Hatch chilies that I purchased at The Chile Shop.  There are other online sources available not only for Hatch chilies, but for almost any chile that is grown and sold.

My veggie chili recipe calls for two varieties of dried chile powders:  (1) any chile powder with a medium level of heat, and (2) chipotle powder.   I specify Hatch Medium for the first, but if this is unavailable, you can easily substitute something else.   Ancho chile is probably your best bet, although it is milder than Hatch Medium.  If you want more heat, you can add some cayenne pepper or more chipotle powder.

If you can’t find chipotle powder, you may be able to buy canned chipotles in adobo sauce.  These often are available in the Mexican food section of supermarkets.  Use one or two chilies from the can (roughly diced), along with some of the adobo sauce.  Unless you like spicy food, you’ll find using the entire can is too much.  You can store the remainder of the can in an airtight container in the refrigerator for a few weeks.

If you can’t find chile powder, you can substitute chili powder.  But be aware that most commercial chili powders have a less vibrant and distinctive taste than chile powder.  In part, this is because a large percentage of chili powder isn’t chilies, but other spices (such as cumin, oregano, and coriander).   In addition, the quality of chilies used may not be particularly good.  See the recipe notes for specifics about substituting chili powder. 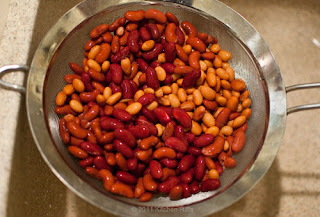 This recipe makes about 4 or 5 quarts.  It freezes well, so your leftovers won’t go to waste.

This recipe packs loads of flavor.  Some even argue (my wife does) that the taste of the chilies comes through more distinctly in veggie chili.

It also carries a lot fewer calories than meat chili.  So if (like me) you need to atone for some holiday excesses, this dish is an excellent choice.

Whatever you decide, there’s one thing that’s not in dispute:  This dish is a winner.  And that’s no blaspheming!
Posted by Kitchen Riffs at 5:15 PM