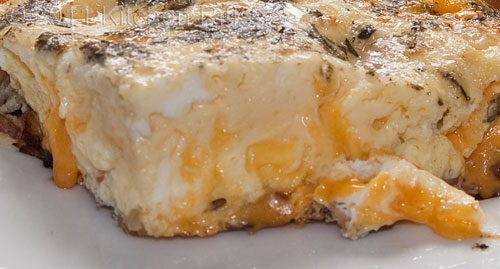 If your refrigerator is like mine, after a major holiday you have a shelf loaded with bits and pieces of food — all carefully wrapped.  There’s never enough of anything to serve alone, but it’s too good to throw away.

All too often, at least in my kitchen, those little food packages get shoved to the back of the fridge, and then forgotten.  Until I rediscover them a month or two later, by which time they’re inedible (and sometimes unrecognizable).

Recently, my leftovers included 3 slices of deli ham, a modest-size wedge of sharp cheddar cheese, and a nearly empty package of bacon.  What was I going to do with those?

Well, as we discussed yesterday in our master recipe for frittatas, the frittata is the perfect vehicle for turning leftovers into something new for dinner.

Before concocting this recipe, I had prepared many frittatas containing either ham or bacon, but had never combined the two meats.  I couldn’t see any reason why they wouldn’t work well together.  I discovered the combination was indeed scrumptious. 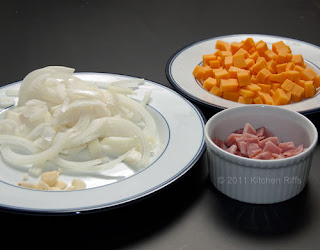 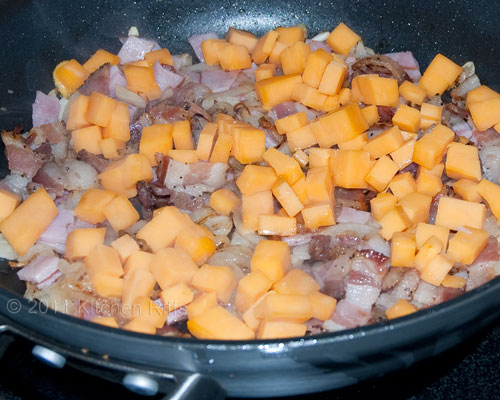 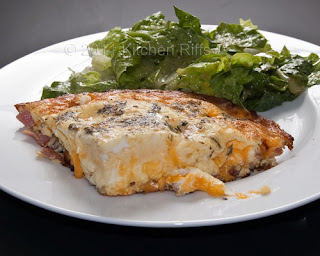 
Last Word on Frittatas - For Now!


OK, two posts on frittatas in two days is enough.  But the frittata is at least a biweekly staple in the Kitchen Riffs household, so it’s likely to make its appearance again on the blog at some future point.

One final note:  Leftover frittata makes a great breakfast.  Put a slice on a plate, think about adding salsa (I do), and microwave for 40 – 60 seconds.

Red Pepper and Onion Frittata
Posted by Kitchen Riffs at 11:06 AM

There was a time when I was doing the cooking for Mom, my Zia, and myself. I'm notoriously bad at figuring out portion size, usually making enough food for an army. This meant leftovers of all kinds in the fridge. At least once a week, I'd clear out the fridge and make a frittata. It was one of the better received meals that I prepared. Your opening photo and paragraphs are very reminiscent of those dinners and have me salivating. :)

Hi John,I'm pretty bad at estimating portion sizes myself - plus I like leftovers! So my refrigerator often has all this leftover stuff in it. ;-) Which usually is a good thing. Thanks for the comment.