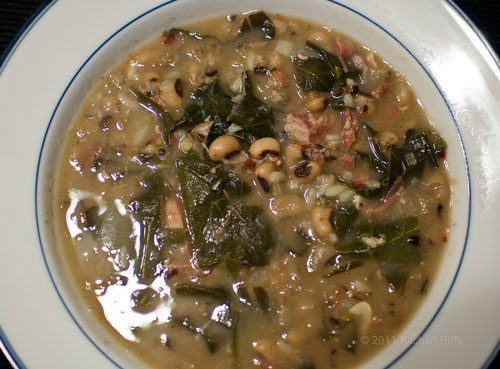 It snowed last night here in St. Louis.  As I write, there are still flurries, and the overnight forecast is for 10 degrees.  Brrrr!

Weather like this makes me crave stick-to-your ribs fare.  And in that category, there’s little more satisfying than a hearty bean- or legume-based soup.

Some soup ingredients that are good anytime — but particularly appropriate for the New Year – are black-eyed peas and collard greens.   We’re only a few days into January, so this discussion seems timely.

Well, I can use good luck and good fortune any time, so why not combine the two in one dish?  Black-Eyed Pea and Collard Green soup fits the bill. 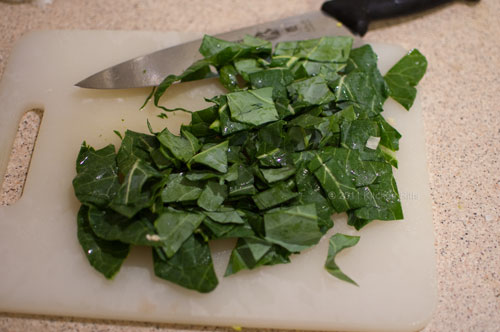 I don’t know what took me so long to discover this soup.

I knew about black-eyed peas from the days my wife and I lived in Dallas.  Texans love black-eyed peas – they are even an ingredient in a dish called “Texas caviar.”  Black-eyed peas vie with pinto beans as the state’s favorite legume (though I’d have to give pintos the nod here).  I’ve used black-eyed peas in numerous recipes — including, of course, Hoppin’ John.

I was also familiar with collard greens, though I used them less in my kitchen.  The traditional collard green recipe calls for slow-cooking them with smoked pork (usually salt pork or ham hocks) in lots of liquid (which becomes the wonderful “pot-likker” that often accompanies the cooked greens).  This is a good recipe, and the long cooking minimizes any bitterness or toughness the collards may have.  But I’ve always found that long cooking leaves the greens with a somewhat muddy taste, so this dish has never been a staple for me.

Nowadays I prefer to cook collards – or almost any dark, leafy green – either sautéed or braised with garlic and/or onions and red pepper flakes (similar to Italian recipes for broccoli rabe).  Cooked this way, you lose the pot-likker, but your greens keep a lot more of their flavor.

Anyway, even though I’ve had Hoppin’ John and collard greens on my plate simultaneously many times, the idea of combining them in a single dish never occurred to me until a few years ago.

My inspiration was Cuban collard green soup, a dish I sampled when my wife and I lived in Tampa.  There are many Cuban restaurants in Tampa, and this soup was one of our favorite menu items at the one we frequented.  The Cuban soup has white beans (navy or great northern) cooked in a pork broth with potatoes and collard greens.

While eating this soup one December day, it occurred to me how easy it would be to substitute black-eyed peas for the white beans and rice for the potatoes, and turn it into a Hoppin’ John and collard green soup.

Versions of this soup already existed (as I discovered when I went looking for recipes), but I somehow had overlooked it.   I don’t remember what recipe I used when I first prepared the soup.  It’s likely that I combined bits and pieces of several, as is typical for me.   But I soon evolved a recipe of my own.
﻿﻿﻿﻿﻿﻿ ﻿﻿﻿﻿

This recipe serves a crowd.  It will make between 4 and 5 quarts, depending on whether you like a thick or thin soup.  And it freezes well, so leftovers won’t go to waste.

First, you need to cook the black-eyed peas with smoked pork.  Recipes often call for presoaking legumes.  But if you soak black-eyed peas, they can cook in about 30 minutes — not long enough to develop a tasty pork broth.  So I don’t soak them, which means cooking time of an hour and a half to two hours — and a superior broth.  Since this is a soup, the broth is important.

Second, you need to sauté/braise the collard greens.  You should do this when the black-eyed peas are nearly done.  This step will require 10 or so minutes, and then you’ll combine the greens with the cooked blacked-peas to finish the dish.

For the Black-Eyed Peas
For the Collard Greens
Final Assembly

Although there are quite a few steps to this recipe, the preparation isn’t difficult.  Read through the steps a time or two and you’ll discover it’s a straightforward dish to prepare. 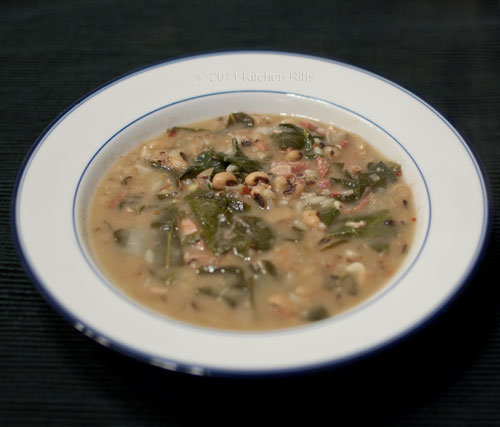 Black-eyed peas and collard greens are nutritional powerhouses.  They’re chock-full of fiber, vitamins, and all sorts of worthy things.  When we were younger, that may have been reason to view them with suspicion!  But we’ve moved beyond that now.  I think.

So, let’s see.  This soup can make us healthy.  It doesn’t cost much, so it can save us money, which over time will make us wealthy (yeah, yeah).  So we’re wise to make it.  Right?

You're welcome! And thanks for commenting.

Just bought collard greens for the first time. Looking for a soup recipe to use them in among the sea of recipes on the internet and I think this one sounds the best AND has the best instructions of them all. Can't wait to try it! Thank you!!

Hi amanyk, collard greens are good! And you'll love them in this recipe -- it's a good one. :-) Thanks for the comment.