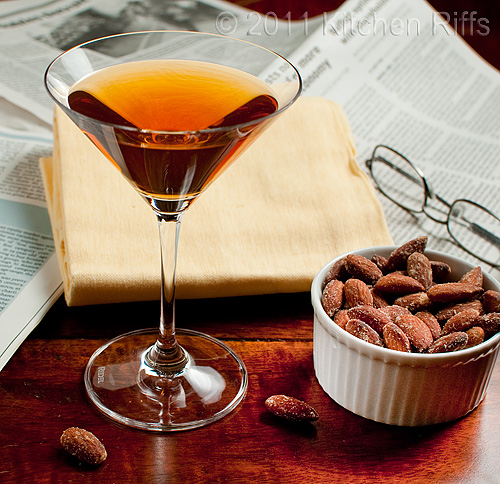 Next week is Mardi Gras (or Carnival) and people around the world will celebrate.

There are several popular customs associated with Mardi Gras — a/k/a Shrove Tuesday, the day before Lent begins. One tradition involves emptying the larder of fats and rich foods by gorging on them in preparation for the lenten fast (hence “Fat Tuesday,” the literal English translation of Mardi Gras). When I was growing up, pancakes were traditional on Shrove Tuesday. Some cultures favor doughnuts.

Parades and festivals are another widespread tradition, often featuring people dressed in costume (or sometimes undressed). In the United States, my own St. Louis celebrates Mardi Gras (Naughty Gras) with particular vigor and enthusiasm. But no city the US is as synonymous with Mardi Gras as New Orleans. They do Mardi Gras proud.

Many of us will imbibe a few alcoholic beverages while enjoying the Mardi Gras festivities. And what could be better to sip than a Sazerac, the official drink of New Orleans? 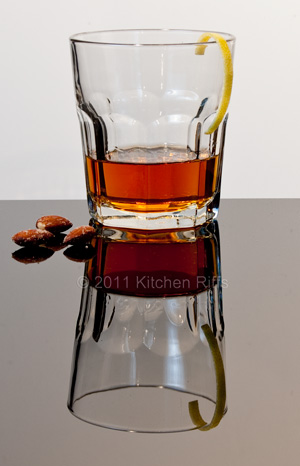 This recipe makes one cocktail.

Traditionally, the Sazerac is served in a “normal”-sized rocks or old-fashioned glass, which holds about 6 ounces.  But most of us have glasses that are considerably larger (about twice that size).  To me, the drink just looks silly in such an over-sized glass.  The Sazerac is served “up” rather than on-the-rocks, which means you’ll have about an inch of liquid in a big, big glass.  So I usually break with tradition and serve it in a smallish (4 – 5 ounce) cocktail glass.

Everyone’s taste in cocktails is different, so balancing flavors can be tricky.   Hence the range of quantities suggested for some ingredients in this recipe.  Adjust as you see fit. The base spirit in the Sazerac was originally cognac or brandy, but in the late 19th century rye whiskey became almost universal.  This switch may have simply reflected changing tastes in the United States.  But it probably had something to do with the phylloxera epidemic that was then ravaging grape vines in Europe.  Cognac is a distilled wine, so it is grape-based.  Phylloxera may have made cognac hard to obtain.  No matter.  I’ve tasted the drink with both spirits, and rye is by far the better option.  In New Orleans, Old Overholt is the most widely used rye; I’m partial to Rittenhouse Bonded, but you can use whatever is handy.

Absinthe, although not part of the original recipe for the Sazerac, has long been associated with it. Somewhere in history, bartenders began using small amounts to rinse serving glasses before adding the rest of the ingredients, thus transmitting a bit of Absinthe’s anise flavor to the drink.  Absinthe has a controversial history.  For a long time, it was banned in the US and much of Europe because one of its ingredients, a species of wormwood (Artemisia absinthium), was believed to cause madness.  Despite that (or perhaps because of it) Absinthe used to be quite popular with the artsy and bohemian set.  Absinthe is usually diluted with 4 or 5 parts water.  Vincent van Gogh reportedly drank his with an additional part of black ink.  Some say he liked the way it made his teeth look — proving, I suppose, that great artists operate on a higher (and certainly more mysterious) visual plane than the rest of us.

Anyway, during the many years Absinthe was banned in the US (it’s only been back on the market since 2007; the “madness” theory has been debunked), various forms of Pastis (anise-flavored liqueurs) were substituted.  Herbsaint is the brand most commonly used in New Orleans.  I usually have Pernod on hand (for making the Corpse Reviver), so that's what I use.

A sugar cube is the traditional Sazerac sweetener (you muddle it in the glass with the bitters and a few drops of water, then add the rye).  But using a whole sugar cube makes the drink a tad too sweet for my taste (a cube is the equivalent of one teaspoon and I prefer about ¾ teaspoon) and muddling is a pain.  So I use Simple Syrup instead.

Peychaud’s bitters are anise flavored with hints of clove and nutmeg.  It has a sweetish smell, and some people detect a cherry flavor (Peychaud’s is bright, bright red so it certainly looks “cherry”).  A good liquor store should stock Peychaud’s bitters.  You can also find it on Amazon.

Angostura bitters are not traditional, but some recipes call for them.  They are not a substitute for Peychaud’s bitters; they are an addition.  I sometimes include a dash (at most) of Angostura bitters because they add extra complexity, but many people omit them.

It’s been a long day, and writing about cocktails makes for thirsty work.  Fortunately, the Sazerac is an admirable end-of-day soother.

This drink packs a punch though, so for me one or two are the limit.

Except, perhaps, during Mardi Gras — when rules can get lost in the raucous crowd.  Now where did I put that black ink? 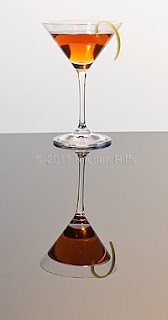 Ha! I had my very first one tonight at Trattoria Marcella. GREAT cocktail!

Thanks for the comment, Alanna. I agree that the Sazerac is really nice.

This definitely reminds me of New Orleans! It's one of my favorite cities to visit, for sure!

Thanks for the comment, Peggy. While writing about the Sazerac I was thinking about some of the great meals and good times I've had in New Orleans. Suddenly I'm hungry for barbeque shrimp (the ones made famous by Pascal's Manale restaurant). I haven't made this dish in years, probably decades. I really should do it again . . .

Hello! Just stumbled upon your blog and, as a St. Louis native now living out of town, I'm thrilled to have found you online!
The Sazerac recipe sounds divine! I can't wait to try it.

I have a question regarding storage of Simple Syrup. I read that it can be stored 3-6 months in the refrigerator. Can it be stored at room temperature?

Hi Sally, welcome! If you're making your own simple syrup, I definitely recommend storing it in the refrigerator. Even then, unless you use add a bit of alcohol to the bottle (vodka works), 3 months is probably pushing it (I talk about this in my simple syrup post - just click on the link to it in the list of ingredients above). I've never purchased simple syrup, so they might add a preservative to it so it can be stored at room temperature. I'd still store it in the refrigerator. Most bars do store their simple syrup at room temperature. But they also go through it so quickly, there's no danger of mold growing. Thanks for the comment.

I'm obsessed with the sazerac; I try to order one wherever I go, and I make them all the time as well. Great writeup! One small suggestion for chilling the glass is to fill it with ice water instead of just ice. Chills the glass MUCH more quickly.

I prefer dropping the lemon peel into the drink; I feel the lemon really enhances the taste of a sazerac, but to each his own.

Hi Marshall, I'll have to try the ice water trick. I've changed my mind on the garnish for this drink since I wrote this - I now tend to garnish it more often than not. I agree the lemon adds nice flavor to the drink. Thanks for the comment.