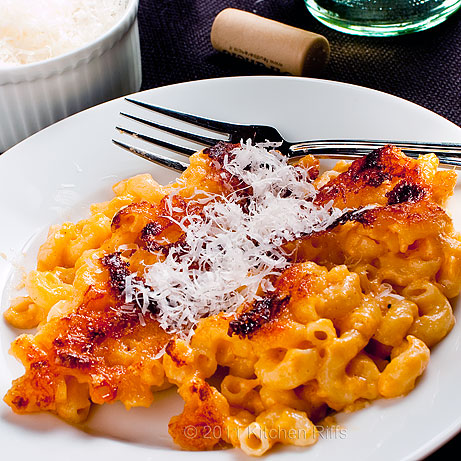 Macaroni and Cheese may be the ultimate comfort food.  There’s just something pleasing and satisfying about pasta enrobed in a rich cheese sauce, baked to golden goodness.

But the versions of Mac ‘n Cheese we usually eat in the United States are “quick” dishes with less than full flavor.  Harried cooks generally prepare them from a “blue box” or use one of the myriad stovetop recipes available on the internet.

Those versions can be good enough, and many are kiddy favorites.  But they simply can’t compare to the traditional (and somewhat more time-consuming) recipe presented here, which involves making a cheese sauce.

I suggest making this traditional Mac ‘n Cheese on a night when you have an extra 20 minutes or so to spend in the kitchen.  The deep flavor this recipe delivers is so good that I’d proudly serve the dish to company, complete with a nice bottle of wine.

When you think about it, macaroni and cheese isn’t all that different from Fettuccine Alfredo (both contain pasta, butter, milk/cream, cheese — and little else).  And who wouldn’t serve fettuccine on a special occasion?

My Mac ‘n Cheese is so good your guests will come back for seconds.  And probably lick the serving dish clean. 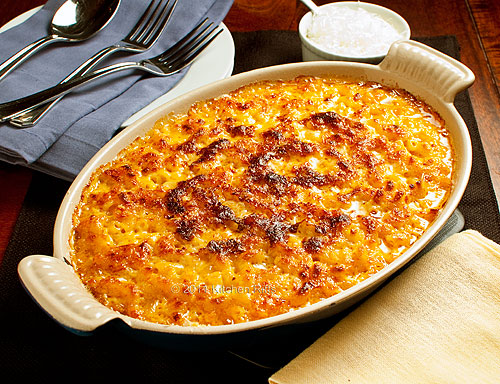 I use two cheeses in my recipe:  cheddar and Parmesan.  You’ll get the best results if you grate both of them fresh for this recipe.  I use a food processor, but it’s also easy enough to grate by hand.  In a pinch, you can substitute pre-grated cheese from the supermarket.

You can find recipes for traditional Mac ‘n Cheese in almost any “comprehensive” cookbook. Mine is adapted from one in the paperback version of Craig Claiborne’s Kitchen Primer. This book is long out of print, but you can buy it used through Amazon for as little as $.01 (plus shipping).

This recipe yields 4 servings when the dish is used as a main course, which is how I like to serve it.  I want Mac ‘n Cheese to be the star of the meal, with a full serving that takes center stage on my dinner plate.  If you prefer to use it as a side dish, this recipe will yield 8 or more servings.  This recipe is also easily doubled.

You’ll need a 2-quart baking or gratin dish for this recipe.

There are 6 distinct activities involved in preparing this recipe: 1) cook macaroni; 2) prep cheese and assemble other ingredients (include heating milk); 3) cook flour and butter together; 4) add hot milk to flour and butter; 5) add cheese to milk mixture; 6) combine milk/cheese mixture with macaroni, put in baking dish, and bake.

I usually multi-task when I make this recipe, and the steps below reflect that. So, for example, while you’re allowing the macaroni to cook (step 2), you can be doing some prep work. When you reach the stage where you combine the flour and butter and begin cooking, however, you’ll need about 5 distraction-free minutes at the stove.

We all know the song “Yankee Doodle,” with the line about the chap who stuck a feather in his cap and called it macaroni. Wikipedia suggests that the song originated with British officers serving in pre-Revolutionary War America, who made it up to mock “the disheveled, disorganized colonial ‘Yankees’ with whom they served in the French and Indian War.” A doodle evidently meant a fool or simpleton.

At the time, men who wore Macaroni Wigs with long powdered curls were considered fashionable to the point of foppishness — and “maccaroni” was slang for a fashionable person. So that line in “Yankee Doodle” was intended as an insult: Your typical American was so foolish and unsophisticated that he thought sticking a feather in his cap would make him fashionable. Ha, ha. Get it?

So what would those mocking British soldiers say about a modern-day Yank who claims that Mac ‘n Cheese is good enough to serve when company comes calling? Am I just an unsophisticated American hick?

Maybe. But haul out the good china anyway: My posh Macaroni & Cheese really is fine fare.

Call me a doodle if you like. You’ll be playing my song. 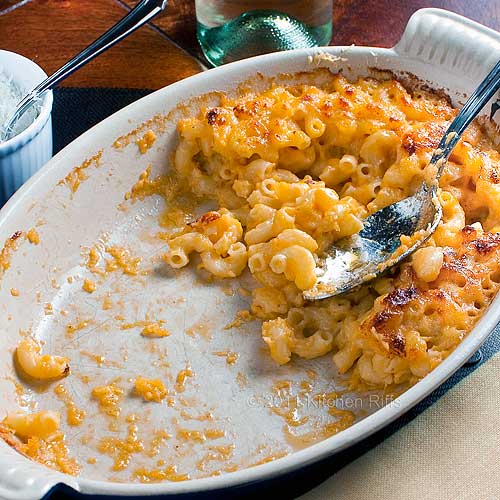 Posted by Kitchen Riffs at 8:10 AM

I LOVE IT! great recipe, I'll try
thank you ciao from Italy Domenica

Thanks for the comment, Domenica. I think you'll enjoy the recipe. BTW, I love Naples and the area south of there. That's a beautiful part of the world.

Dear Kitchen Riffs,
The family cook has me on a strict diet and I don't get to snack very often, but your mac&cheese looks delicious, and I would be delighted to lick the platter clean! I have printed the recipe and am leaving it where the cook can see it. Perhaps she will make it, and I can snatch a few mouthfuls when she is not looking!
Your Friend,
Beet.
ps - How about a recipe for homemade biscuits? I drool in anticipation.

Thanks for the interesting comment, Beet. For some reason I'm reminded of that old New Yorker cartoon with the caption, "On the Internet, nobody knows you're a dog." ;-)

I've made this recipe for my birthday - I was throwing a dinner party for 20 people with an 'American' theme (not being an American, this was a nice way for me to try out new things). The mac'n'cheese was a great hit - it's very easy tasting food. So thanks for the recipe!

Hi Hannah, I'm delighted that you enjoyed the recipe! Your party sounds like it was a lot of fun. Thanks for taking the time to comment.