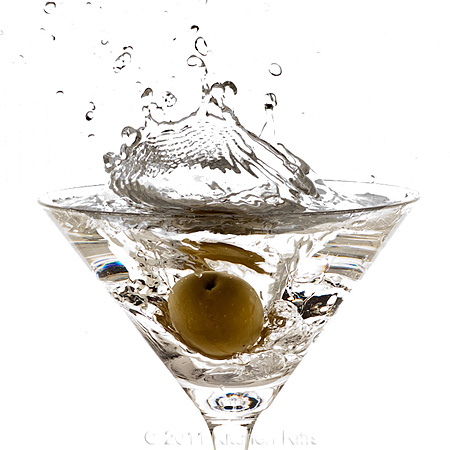 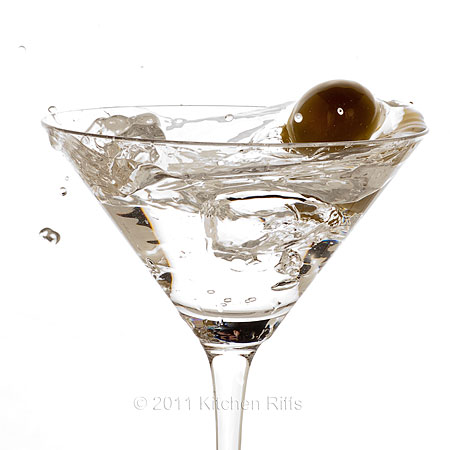 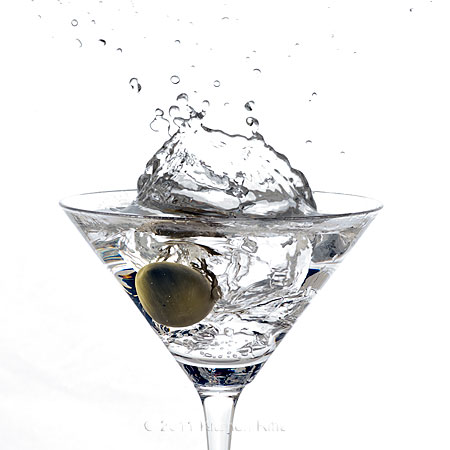 Found you on TasteSpotting. That is one gorgeous photo. Nice work.

Hi Lynne and Rachel, thanks for the kind words regarding the photos. The drink is mighty good, too! Thanks for stopping by and commenting.

How strong would one or two martinis be for a lightweight drinker?

Oh my God! What a stunning photograph!! Looking forward to learning a lot from you on photography!!

@Calvin, great question. The rule of thumb that I’ve seen frequently quoted for alcohol equivalency among different drinks is 1 ½ ounces of spirits (gin, vodka, bourbon, whatever) is roughly equal to a 12-ounce container of beer or a 4-ounce glass of wine. My Martini recipe calls for 2 ounces of spirits, plus the ½-ounce of vermouth has about twice the alcoholic content of wine – so I’m guessing a Martini made according to my recipe is the roughly the equivalent of somewhat less than 1 ½ beers or glasses of wine. If you want a smaller drink, I suggest 1 ½ ounces of gin with ½ ounce of vermouth – this would result in a drink slightly more alcoholic than a glass of wine, but because the gin/vermouth ratio is 3:1 would also taste a little less strong.

You might also want to consider a Pimm’s Cup; the alcoholic content of this is a bit more than half a glass of wine, and it’s a delicious drink (a drink often associated with warmer weather, but really quite pleasant any time of the year). Let me know if you’d like additional info. Thanks for stopping by!

@Purabi, thanks for those extremely kind words - I really appreciate them.

Love the shots! And I love me some martinis. You've got me craving one right now!

Hi Russell, thanks! Martinis are a great drink, aren't they? And remember - they have antioxidant properties! Thanks for commenting.

Hi Katherine, thanks for the kind words re the photos. Delighted you bought the Regan's orange bitters! Let me know how you like them in a Martini. Thanks for your comment.

What an interesting history of martinis! Thanks for sharing.

Hi Beth, thanks for stopping by! I'm glad you enjoyed the historical notes on the Martini; a lot of cocktails have more history behind them than one would imagine, so it's always fun learning about them. Thanks for the comment.

With the kind of day I'm having at work, this is order to try this evening. I've always been put off by vermouth even tho it's in our bar. One Q - how do I know if it's gone bad?

Hi Denis, good question. The main thing that happens to a fortified wine - vermouth and sherry - is that exposure to light and/or oxygen causes it to deteriorate in flavor and color. It won't go "bad" in the sense that it will hurt you if you drink it; but over time the flavor and aroma will change, and it will lose its brightness and vitality. It won't taste awful; but it also won't taste very good. It doesn't turn to vinegar the way an open bottle of wine would; but it's getting there. I'd take a sip - if it has a nice mineral wine flavor, it's good. If it's unpleasant - well, I'd dump it out. And resolve to store my vermouth in the refrigerator in the future. Don't go through a bottle of vermouth that quickly? Use a little dry vermouth in place of white wine when cooking - it's a great substitute (use about 2/3 as much vermouth as you would wine). Hope this helps, and thanks for stopping by.

Thank you for the very valuable information, not only knowing if the vermouth is useable but how to get a whole bottle used - in cooking. Great idea.

Hi Denise, glad my response to your questions was useful. Using dry vermouth in cooking is something I remember hearing about from Julia Child. Makes sense - how many of use are going to open a bottle of wine when all we need is a quarter cup for a recipe? Thanks again.

Lots of chatter recently on the boards about Dolin vermouth as a good alternative to consider after the Noilly Prat formulation change...

Hi Anonymous, thanks for the info about Dolin vermouth. I haven't tried it, but I'll be on the lookout for it and pick up a bottle to evaluate. Thanks for the comment.

Just saw this recipe in the Gojee "Drinks Top Three" newsletter just delivered to my Inbox ... congrats on being featured there!

I myself love a good gin martini ... though I need my olive juice to make it "dirty" ... there's just something about that combination that I love!

Hi Kimberly, thanks! It's always fun being one of Gojee's Top Three. Dirty Martinis are pretty good, though I most frequently have the pristine "pure" version. And it has to be gin - vodka has its place, but it doesn't combine that well with vermouth, IMO, so I think it's a waste using it in a Martini - though obviously many people disagree. Thanks for commenting.