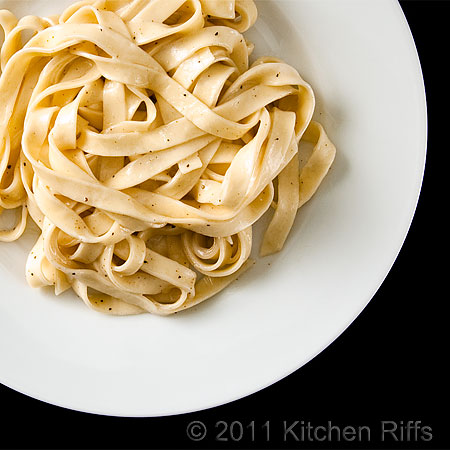 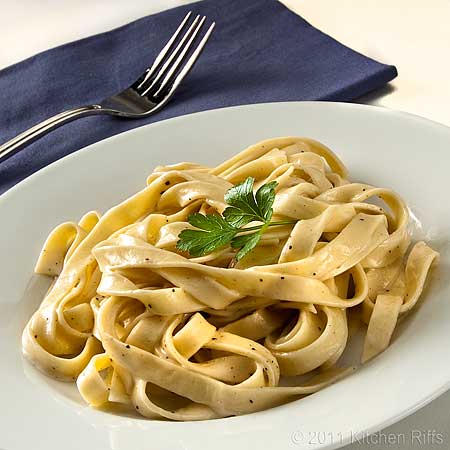 Originally, this dish was an extravagant version of a traditional Italian recipe, Pasta al Burro, which uses only butter and Parmesan cheese as flavorings (a similar concept to Pasta Cacio e Pepe).  The recipe for Fettuccine Alfredo doubled (or even tripled) the amount of butter and Parmesan that you’d traditionally use in Pasta al Burro, and mixed in some pasta cooking water to form a little sauce.  The result was a rich, flavorful dish.

Most modern versions of the recipe (including this one) reduce the amount of butter and Parmesan cheese and add cream to help form a sauce.   And why not?  Cream is essentially liquid butter (butter was cream before it was churned, after all).

So the recipe I present here isn’t the original one used in Alfredo’s kitchen, but it’s awfully good.  And in my book that’s all that matters.

This recipe serves 3 to 4 as a main dish, or about 6 to 8 as an appetizer. My recipe is adapted from Marcella Hazan’s Essentials of Classic Italian Cooking. 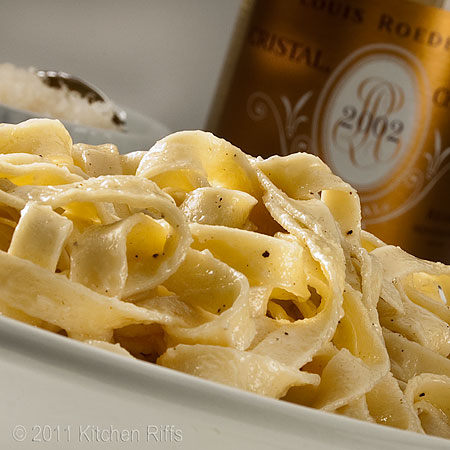 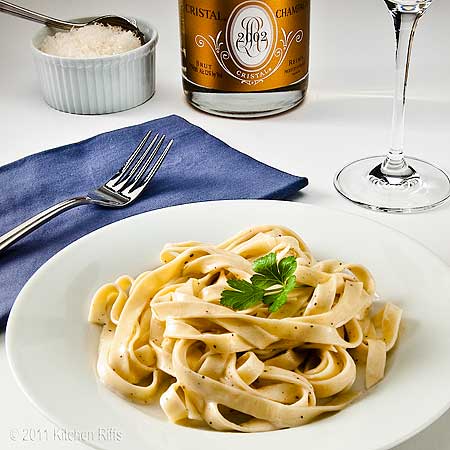 Fettuccine Alfredo is rich, luscious, and (if you overindulge) fattening.  All prime attributes for a company dish!  Or for a romantic dinner à deux (break out the good champagne).

This is one of those recipes that seems complicated to people who don’t know how to make it.  In truth, though, it’s a snap to cook and assemble.

But you don’t have to let them know that, do you?  Just let them think you’re a hero in the kitchen.

If you serve this dish, you will be.

Fettucini is one of my favorites. I just found a recipe for fettucini with pecans and shredded zucchini that I plan to try. So many variations for pasta. Love it!

Hi Pattie, thanks for stopping by! The pecans & shredded zucchini sounds great. The zucchini in particular would be delicious - you could cut it in flat ribbons that would complement the shape of the fettuccine noodles, so not only would it taste good, visually it would be interesting. Thanks again.

My sons love this dish and I love the lovely photo and the great background on the dish in this post.

Hi FJK, thanks for commenting! And thanks for the compliment re photos. Your sons have great taste - sounds like you're raising them right!

Is there anything more comforting and delicious than a good fettuccine alfredo? Yours looks perfect! Thanks for a great recipe.

What beautiful pictures, first of all...very inviting! And such a simple and elegant plate of fettuccine! I look forward to trying this recipe!

Hi Katherine, I agree - fettuccine alfredo is a wonderful dish. Every time I make it I always wonder why I don't do it more often. Thanks for stopping by.

Anne, thank you! I've come to really enjoy taking pictures of food - it's such an enticing subject. Thanks for commenting.

Also, I have an award for you :-) It's waiting here: http://www.katherinemartinelli.com/blog/2011/tofu-satay-with-peanut-dipping-sauce/

Hard to believe I've never made an alfredo sauce. I"ll be bookmarking this to try later!

Hi Beth, it's a great recipe and I hope you enjoy it! Thanks for stopping to comment.

Saw your recipe on tastespotting, and i'm so happy to have found a simple recipe for my favorite dish. looks so great and can't wait to try it! thanks! :)

Hi Anonymous, I hope you enjoy the recipe. It is a really simple recipe, which I like; but also really tasty. Thanks for the comment.

HISTORY OF FETTUCCINE ALL'ALFREDO AND OF ALFREDO DI LELIO CREATOR OF “FETTUCCINE ALL’ALFREDO”
With reference to “fettuccine all'Alfredo” we have the pleasure to tell you the history of our grandfather Alfredo Di Lelio, creator of this recipe in the world known.
Alfredo di Lelio opened the restaurant "Alfredo" in Rome nel 1914, after leaving his first restaurant run by his mother Angelina Rose Square (Piazza disappeared in 1910 following the construction of the Galleria Colonna / Sordi). In this local spread the fame, first to Rome and then in the world, of "fettuccine all'Alfredo". In 1943, during the war, Di Lelio gave the local to his collaborators.
In 1950 Alfredo Di Lelio decided to reopen with his son Armando (Alfredo II) his restaurant in Piazza Augusto Imperatore n.30 "Il Vero Alfredo", which is now managed by his nephews Alfredo (same name of grandfather) and Ines (the same name of his grandmother, wife of Alfredo Di Lelio, who were dedicated to the noodles).
In conclusion, the local Piazza Augusto Imperatore is following the family tradition of Alfredo Di Lelio and his notes noodles (see also the site of “Il Vero Alfredo” http://www.alfredo-roma.it/)
Best regards Alfredo e Ines Di Lelio

Hi Alfredo and Ines, interesting history! Thanks for the information and for taking time to share it with us.