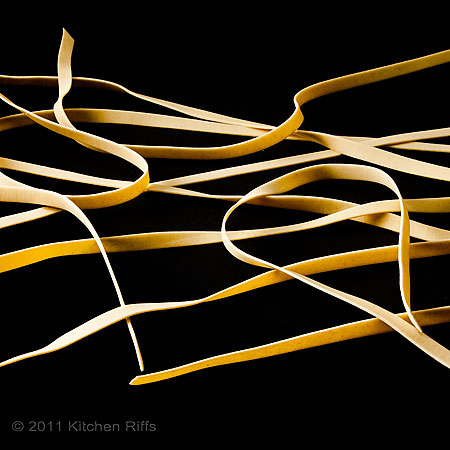 Homemade pasta and noodles are incredibly tasty — and relatively easy to make if you use a food processor and a pasta machine.

Some will argue that mixing the dough and rolling it out by hand produces a more toothsome result.  And they may be right.  But unless you’re ready to make a batch of pasta every day for weeks on end to acquire the skill and muscle memory you need for this exercise, well, using machines in your kitchen is the way to go. 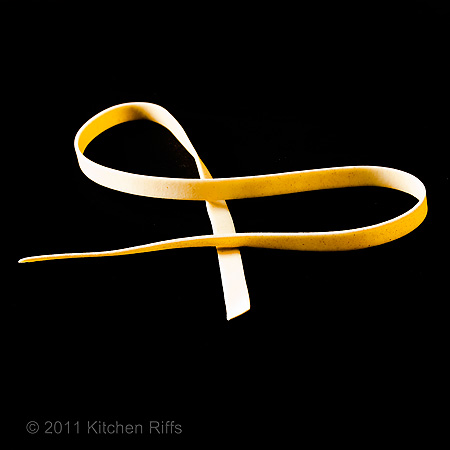 Pasta Versus Noodles:  A Brief Note on Terminology

In this recipe, I use the terms “pasta” and “noodles” more or less interchangeably.  In fact, however, the two have somewhat different meanings.

“Pasta” is an Italian word.  And when we think of pasta, most of us picture well-known Italian dishes like spaghetti and ziti.  Pasta can be fresh or dried.  Fresh pasta (like that featured in this recipe) is usually made with eggs, while dried pasta almost never contains eggs (because eggless varieties can be stored for much longer).  Dried pasta comes in a range of shapes (including tubes, shells, and bow ties).

Noodles have a more eclectic provenance than “pasta.”  They are common in many European cuisines (the English word probably derives from the German “nudel”) and in Asian cooking.  We in America tend to picture noodles as being long and flat like fettuccine, or flat and short, like egg noodles.  But in fact they, like pasta, can come in a variety of shapes (think spätzle, for instance).

The recipe I present here describes how to make homemade pasta that you will roll out and cut into a long, flat shape that we Americans associate with noodles.  OK, got that?

Since this is a recipe for fresh, homemade pasta, it calls for eggs. You can make homemade pasta without eggs, but it’s less rich and less satisfying.

The recipe assumes you have a food processor and a hand-cranked pasta machine (Atlas is a common brand). Rolling out pasta dough with a manual pasta machine isn’t effortless. But once you learn how to operate the machine, it’s a fairly simple process. You can buy home-style electric extrusion pasta makers, but they are a pain to clean. And they produce inferior pasta, IMO.

This recipe yields just under a pound of fresh pasta, which is enough for 3 to 4 entrée servings, or 6 (maybe 8) appetizer servings. You can easily double or triple this recipe. Note that fresh pasta doesn’t yield quite as many servings as an equal weight of dried pasta. I’ve adapted this recipe from Mark Bittman’s How to Cook Everything.

Procedure for Forming the Dough & Noodles 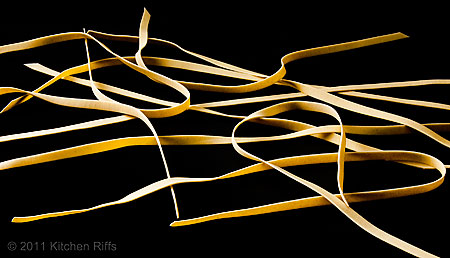 If you’re making a dish that calls for fresh pasta, the homemade version detailed in this recipe will work well.  It will certainly taste better than most store-bought “fresh” pastas, particularly the overpriced stuff in sealed plastic containers sold in many grocery stores.  However, if you’re lucky enough to be able to buy freshly made pasta directly from a pasta maker (and there are artisan pasta makers all over the country), that’s a different story – their pasta is likely to be marvelous.

Good as fresh pasta is, it’s not ideal for all recipes.  Many traditional dishes taste better with dry pasta.  Spaghetti and meat balls, for example.  And some of the shapes available as dry pasta (shells, for example, or any of the tubular varieties) are impossible for most home cooks to reproduce.  Recipes will generally specify what style/type of pasta is appropriate.

One dish where fresh pasta is a must is Fettuccine Alfredo.  Which we’ll discuss later this week.