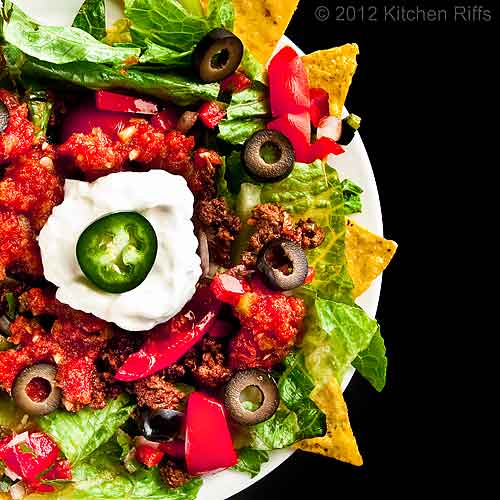 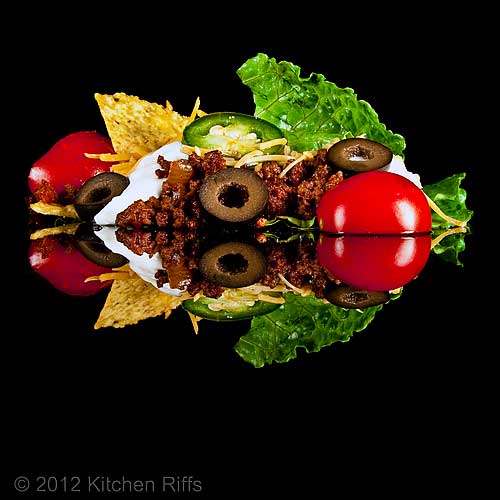 The mix and quantity of ingredients are pretty variable in Taco Salads. Most people want taco meat (I like to use the meat recipe from my Tacos).

Less traditional — but even tastier — is a ladelful of chili. You might like the meat chili from my Chili Basics post. Or you could go the veggie chili route — using, say, Sweet Potato Chili with Black Beans or Vegetarian Chili. I really like to load Taco Salads up with Salsa and Picante Sauce. In fact, sometimes I skip the meat (or chili) entirely, and just use a ton of Fresh Salsa and/or Picante! Lots of flavor, very filling, and pretty healthy. I also typically use either sour cream or shredded Cheddar cheese. I find one or the other to be enough, though I do sometimes use both.

This recipe serves 4, but you can easily scale it up or down to suit your needs.  Preparation time is about 20 minutes.  (Add another 30 minutes or so if you need to prepare Fresh Salsa or Picante Sauce.)  I suggest preparing no more salad than you need, since leftovers don’t keep that well. 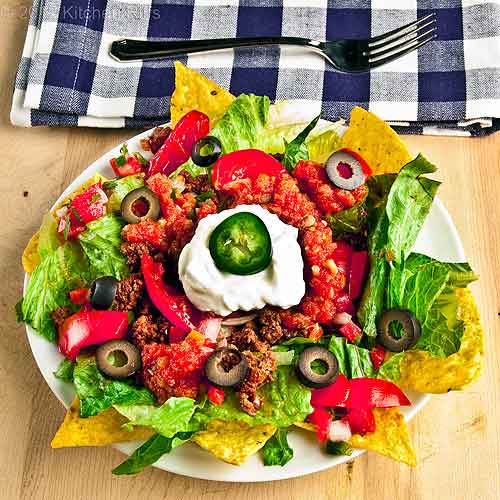 Although the flavor of Taco Salad is all Mexican, it’s not a traditional dish. The Food Timeline Organization says Taco Salad dates back only to the 1960s. Who knows how it actually originated. Probably some hungry genius who was craving tacos but wanted a salad too.

Of course, a lot of our best-known Mexican or Tex-Mex dishes aren’t “authentic,” as we noted last week when discussing Tacos. And many favorites — probably including Taco Salad — seem to be US inventions. At least Salsa and Picante Sauce are authentically Mexican!

Later this week we’ll conclude our Mexican/Tex-Mex series with a discussion of the quintessential Cinco de Mayo cocktail: the Classic Margarita.

So we’ll be featuring an authentic Mexican cocktail, right? Tequila is old as the hills, and it’s Mexican. So obviously the Margarita must be too?

To tell you the truth you got me into Tex-Mex cooking over the weekend. After reading your previous post, I ran to the grocery store to complete my ingredients and boy did my hubs loved it!
Now who couldn't resist a bowl of these beautiful taco salad. I may go back again to the grocery store or even better, go knock at your door haha. You live in STL you said? Well don't be surprised if I will be at your door anytime soon ... hhaha JK oh please I hope I didn't scare you. Have a great Monday!
Malou

Hi Malou, I often have hungry people showing up on my doorstep! ;-) Glad you've been enjoying the Tex-Mex recipes - one of my favorite cuisines. Thanks for taking time to comment.

I've had taco salads once or twice out but have never thought to make it at home - why not? This looks like it would make a wonderful lunch or dinner. Can't wait for the margarita post!

Hi Katherine, I know what you mean - there are dishes that I eat only in restaurants but never make at home. But if you make tacos at home, you'll like making this salad - it's easier! Thanks for stopping by.

I love homemade taco salads more than what you find in the restaurant. This looks fabulous - love Tex-Mex!

TEX MEX is so easy and versatile. Last weekend I had a TEX MEX gathering with some friends and their kids. Always a hit and fun because they get to assemble their own toppings. I can't wait to read about your margarita recipe. Take care, BAM

Hi Laura, I agree - some things are better in restaurants, but I'll stack my Taco Salad up against any that I've ever eaten in a restaurant. And I love Tex-Mex too! Thanks for taking time to comment.

Hi Bam's Kitchen, it is pretty easy, isn't it? Glad your Tex-Mex party went well. And I'm just finishing writing the Margarita post now! I hope you'll enjoy it. Thanks for commenting.

I much prefer making this at home, too. As you rightly pointed out, that way you can control the calories and still enjoy a wonderful zesty salad with full-on Mexican flair.

Hi Carolyn, totally agree - you've said it all! Thanks for taking time to comment.

I absolutely love taco salads! Sometimes I lighten mine up by skipping the meat and going with some black beans or kidney beans. This looks great!

Hi CulinarilyCourtney, both black beans or kidney beans are super choices in a Taco Salad - I sometimes do this, too. (And they're also good in regular old tacos.) I mix a little extra Picante Sauce in with the beans to zip up the flavor! Thanks for commenting.

I am loving all your recipes we can enjoy for Cinco de Mayo! Taco salad is one of my favorite salads, so delicious:-) Take care, Terra

You have presented this TAco Salad really beautifully! I love the mix of colors...A truly great way to celebrate ethnic pride and festivities!

Hi Terra, glad you're enjoying them! I'm having a lot of fun with them. Thanks for stopping by.

Hi MyFudo, isn't this a pretty salad? Really fun to assemble and photograph. And eating? That's the best part! Thanks for your comment.

So much color and flavor in this salad! I've never seen the make-your-own taco bowl kits, but now I'm curious to try one. What a festive dish!

Hi Jeanne, those taco bowl kits are kinda cool. Only complaint I have is I'd prefer they be a bit larger (for more lettuce capacity), but you can certainly stack lettuce + other ingredients high if you like. Thanks for commenting.

This taco salad idea is pure genius - can you say beautifully gorgeous :D
I love the colours and flavours which blend so well!

Hi Choc Chip Uru, great salad, isn't it? And I, too, think the colors on this are quite nice! Thanks for your comment.

This is a staple in this house - everyone loves it. We make vegetable-centric, skip the sour cream (although confess we do like a lot of cheese). Yours looks so nourishing and comforting. All those colors dancing on a plate.

You are making me hungry. I think I may have to go to Chipotle tonight for dinner.

Hi Claudia, if you like a veggie-centric Taco Salad, you might want to try it with a Veggie Chili sometime - really nice flavor. We sometimes skip the sour cream and load on the cheese! Always nice to have choices. Thanks for commenting.

Hi This is How I Cook, always happy to make you hungry! Chipotle delivers some pretty good food - good choice! Thanks for stopping by.

It's only been a week but I've already missed a few Mexican recipes! You are such a prolific blogger! I'd love to try this taco salad dish. I love tacos and get them for lunch from one of those Mexican taco street vendor ( street food is a common scene in NYC). Like someone already said your taco salad looks too pretty to be consumed but I can imagine how delicious it is with all the fresh ingredients and the homemade salsa you featured earlier. Thanks again for sharing this!

Hi Yi, Margarita post coming tomorrow! ;-) I used to work in Manhattan, and loved the street vendors! Some really good food - and some really notgood food sometimes! Thanks for your comment.

I just realized that I had never had taco salad at home! I order taco salad sometimes, between fajitas and tacos, but never tried to make it at home! I really love how you prepare your taco salad!

Hi Nami, I used to never make them at home, either - until I started to. Now? I never have one at a restaurant - mine are much better. And you can tailor the salad to your taste when you make it, which is always a plus. Thanks for your comment.

I found you through Maureen and am so glad I did. I stopped in my tracks when I saw this recipe. The photos are stunning. Your notes are incredible.

Hi Kim, welcome! I hope you enjoy it here! Thanks for the kind words, and the comment.