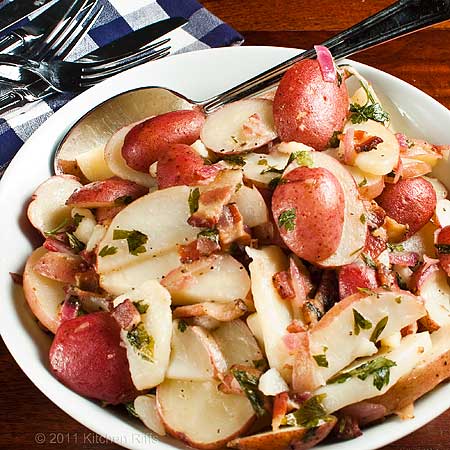 This German Potato Salad, with its rich bacon and vinegar flavor, is delicious winter or summer.  It pairs as nicely with burgers or barbeque as it does with knockwurst or schnitzel.

If you like bacon (who doesn’t?) and potato salad (don’t we all?), you owe it to yourself to give this recipe a try. 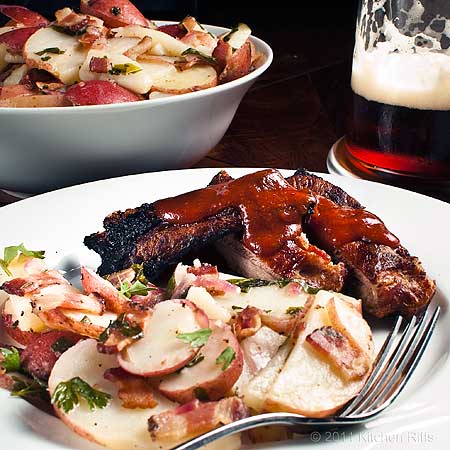 This recipe is really a cross between French Potato Salad and Spinach Salad with Hot Bacon Dressing. Essentially you make bacon vinaigrette, then add it to warm cooked potatoes.

Although you can serve this dish cold, it tastes much better hot or at room temperature. If you prepare it ahead, remove it from the refrigerator 20 minutes or so before serving so it can warm up. This salad will keep fine in the refrigerator in an air-tight container for a day or two. (It’s still safe to eat for a few days after that, but the quality will have diminished.)

This recipe is adapted from my mother’s, and serves 6 – 8. It can easily be doubled. 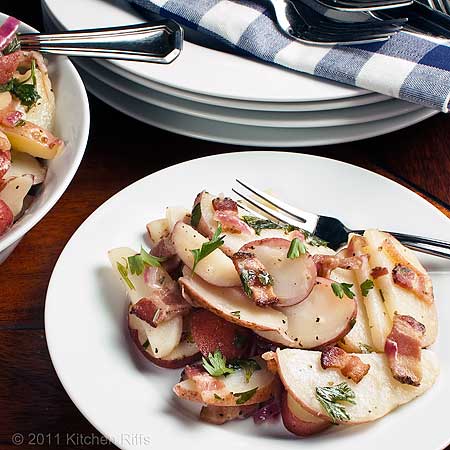 This is the fifth and last entry in our Potato Salad Fortnight series.

These recipes provide a solid foundation in the “how to” of making potato salad. That’s because virtually any potato salad recipe you’re likely to encounter will require techniques that are similar to one or more of the recipes we’ve covered. Know these recipes, and you essentially know how to make any potato salad. 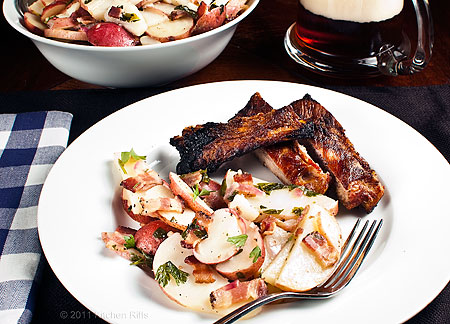 Too Much Potato Salad?

The Kitchen Riffs have been eating lots of potato salad for the last few weeks as I’ve perfected these recipes.  You’d think we’d be tired of it by now.

And I thought I was until Mrs. K R reminded me that we’re hosting the family July 4th festivities at our house this year, and picnic fare is in order.  Which of course means more potato salad.

Weird.  I’m suddenly hungry for it again.  Which kind of potato salad should I make?

I’ll let you know what I decide.  Eventually.

Can you make it ahead?

Hi Anonymous, absolutely. But I suggest removing it from the refrigerator for a good 20 minutes before serving -- it tastes better at room temperature IMO.

Should/could this be left out over night??

Hi Wanda, I'd refrigerate it if you're making it a day ahead of time, or want to leave it out for a long time. It'd probably be OK if you did leave it out, but I wouldn't want to risk it.

How many day will it be good if refrigerated after party. Was out for 4 hrs.

Hi Chris, I'd guess -- and this is a guess -- a couple of days for sure. Probably up to 5, although the flavor won't be as good. The acid from the vinegar helps keep bacteria from forming, even though the potato salad was at room temperature. But as I said, this is a GUESS -- if in doubt, I'd toss it. Thanks for the comment.