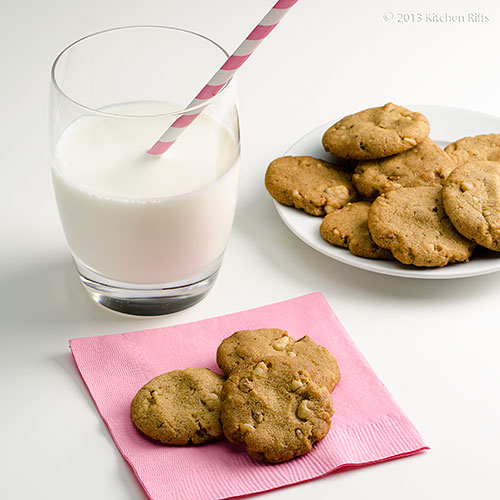 Say “sandies,” and we usually think pecans.  But you can use almost any type of nut to make these wonderful shortbread-like cookies.

Most supermarkets carry two varieties of walnuts:  the so-called English walnut (which actually originated in Persia) and the black walnut, which is native to eastern North America.  English walnuts tend to be more abundant (and much less expensive), in large part because they’re easier to cultivate — they are grown commercially, while black walnuts often are harvested wild (by hand).  And the shells of English walnuts are much easier to crack, making them less costly to process.  But black walnuts deliver especially good flavor — bold, rich, and earthy.

If you don’t want to splurge on black walnuts (or have trouble finding them), you can substitute English walnuts — or use a mix of the two.  Any way you make them, these cookies are so good, you’ll want to eat more — OK, quite a few more — than you really should.  Don’t say you haven’t been warned.

Sandies are really gussied up shortbread cookies.  Traditional shortbread contains nothing more than butter, sugar, and flour.  This recipe adds other ingredients, including nuts (which provide fat as well as flavor), so it isn’t true shortbread.  But it’s a close cousin.

You’ll find some recipes for sandies that contain egg.  Sorry, but that’s a no, IMO — the egg adds too much richness to the dough, changing its character.

With all the butter and sugar these cookies contain, no one would call them “healthy.”  But at least walnuts add some protein, omega-3 fatty acids, minerals, and vitamins.

There are loads of recipes available for sandies.  Mrs. Kitchen Riffs is the baker in our family, and she adapted this one from Martha Stewart’s recipe for pecan sandies. (When you see “I” in most of the Notes, that’s Mrs K R talking.)

It takes about 10 minutes to mix the sandies, and maybe half an hour to bake them (assuming you’ll need to do the baking in a couple of batches). This recipe yields about 60 cookies (depending on how big you make them). Leftovers store well in an airtight container for a few days. 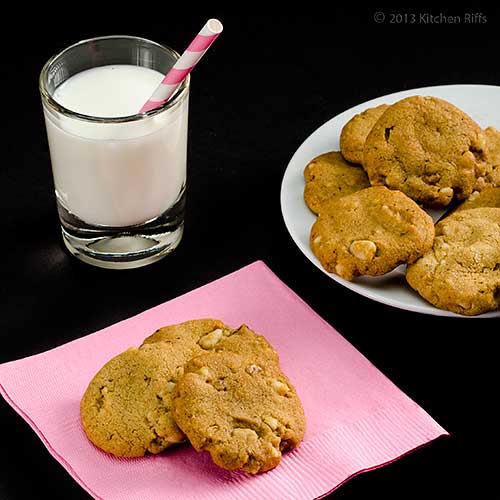 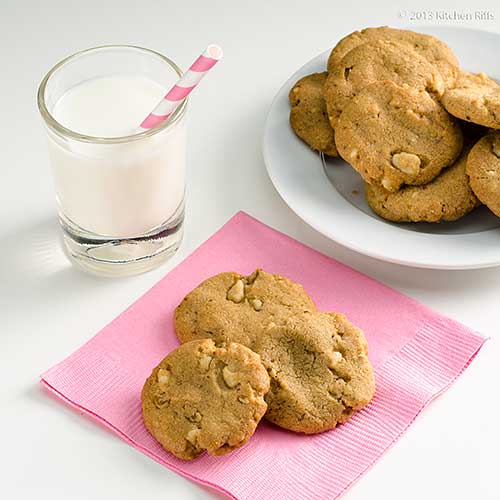 Putting My Money Where My Mouth Is

“So, which kind do you prefer?” asked Mrs. Kitchen Riffs, pointing to the two platters of cookies she had placed on our kitchen island.

“They’re both good,” I said, reaching for another round of cookies to confirm my first impression.  “Though I think this first one is better.”

“I thought so!” she beamed.  “That’s the one with the black walnuts.  The other’s made with English walnuts — the more commonly available kind.”

“There is a difference in flavor,” I admitted.  “Although I’d be happy with either one of these.”

“But the black walnuts are better!” said Mrs K R gleefully.  “I thought they would be — it’s important to test these things.  I wanted to be sure before I ordered a bunch of walnuts.”

“Order?” I wondered.  “Can’t you just get them at the supermarket?”

“Sure,” she said, “but black walnuts tend to be expensive, and supermarkets slap premium prices on them.  Much cheaper online.”

“How expensive?” I asked, suddenly wondering about our bank balance.

“Have another cookie,” said Mrs K R sweetly.  “Not too expensive — nothing to worry yourself about.  Besides, you’ve always said that when it comes to food, quality, not cost, should be our main concern.”

I nodded as I bit into another cookie.  Sometimes my big mouth gets me into trouble.