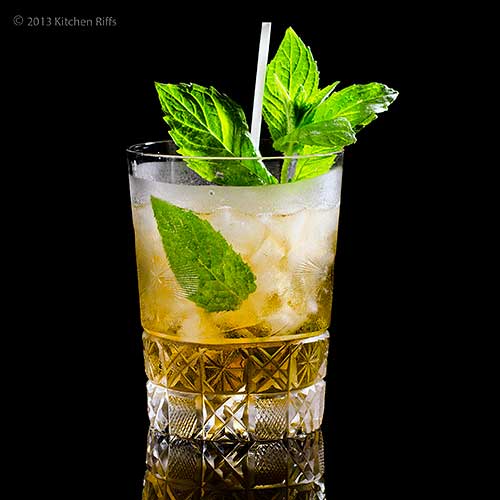 This Cooling Cocktail is Traditional for Kentucky Derby Day

The Kentucky Derby is among the most famous horse races in the US (and part of the Triple Crown Series that also includes the Preakness Stakes and the Belmont Stakes).  Traditionally held the first Saturday in May, it’s the first big US race of the season.  Although the horses run for only a few minutes (the course measures 1¼ miles), most of those who attend make an all-day party of the event.

While all sorts of beverages typically are on offer, the Mint Julep is “the” drink at the Kentucky Derby.  This ice-cold cocktail traditionally is served in a silver cup — which the imbiber holds by the bottom and top edges in order not to disturb the frosty coating of condensation that develops on the outside.  I’ve never felt the need to invest in silver cups just to serve a Mint Julep, so I generally use an Old-Fashioned (rocks) glass instead.  A Collins (tall) glass also works well.

Even if you aren’t traveling to Churchill Downs this weekend to attend the Kentucky Derby, you can still relax and enjoy this cool and refreshing drink.  In the northern hemisphere, warm weather has finally arrived, so we can celebrate it with this cooler.  In the southern hemisphere, you may be enjoying the last warm days before winter arrives, so what better way to say goodbye to summer than with this refreshing drink?

And you don’t need a silver cup.  Really. 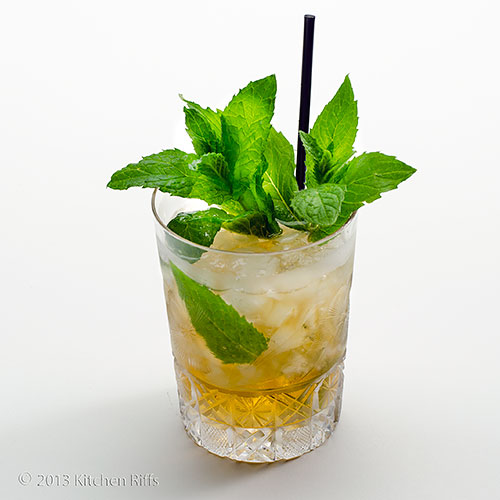 Nowadays, we call all mixed drinks “cocktails.”  But historically, that’s not correct.  A cocktail originally was just one type of mixed drink.  There were also cobblers, slings, highballs, and many more — including juleps (which are a form of “smash” — yet another drink category).  So what distinguishes a julep?  Well, usually we muddle mint at the bottom of the serving glass (typically with some sugar) before adding ice and liquor.  Doing so releases the mint’s volatile oils, and thus helps flavor the drink.  You can use a “muddler” for this purpose (it looks kind of like a small baseball bat — every liquor store stocks them).  A long-handled spoon works too.  Just make sure your glass has a tempered (or at least thick) bottom so you don’t risk cracking it when you muddle the mint.

We tend to associate whiskey (specifically bourbon) with juleps, but you can use any liquor.  Last year we discussed The Mojito Cocktail, which is essentially a julep made with white rum instead of bourbon. Juleps made with gin used to be common, though they have fallen out of favor these days.

Most recipes for Mint Juleps include a lot of booze — typically 3 or 4 ounces of bourbon. That’s too much for me to handle in one drink, so I’ve reduced the amount. Many people like their Mint Juleps on the sweet side. I prefer mine less so (and my recipe reflects that), but feel free to add more sugar. Consider making mint-flavored simple syrup for this drink — you’ll get much more mint flavor than the standard recipe produces. In the Notes, I include a recipe for making mint simple syrup. 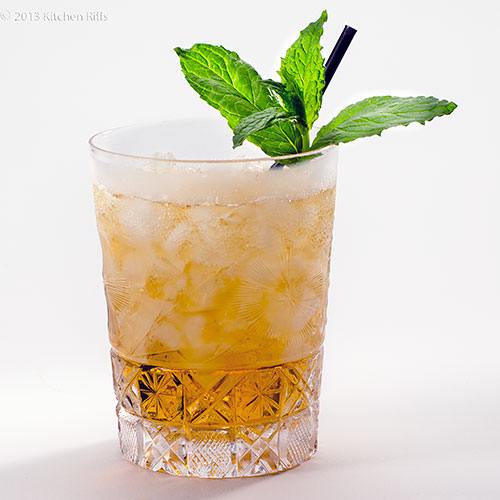 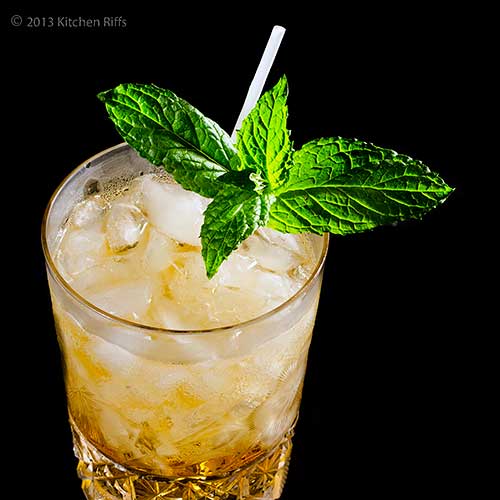 Juleps have been around for centuries in one form or another.  Gary Regan, in The Joy of Mixology, reports that the word “julep” was used in England as far back as 1400 to mean simple syrup (it’s derived from the Persian golâb, which means rose water). In the US, the Mint Julep originally was a regional drink, served in the southern states.

As noted above, juleps don’t need to be made with bourbon.  In fact, they probably weren’t made that way until the late 1700s (when bourbon became known as, well, bourbon).  Before that time, rum (dark) was probably the spirit of choice, although Regan reports that both peach brandy and regular brandy were common in early forms of the drink.

Mint Juleps are a natural when warm weather arrives, so it’s not surprising that they have become linked to late-spring and summer events.  In addition to the first Saturday in May (Kentucky Derby day), Regan notes several other dates on which the Mint Julep figures prominently — including July 4th, Independence Day in the US.

May 28 “marks the opening of Julep season as celebrated by members of the General P.G.T. Beauregard Marching and Burial Society.”  (Regan observes that there’s no mention of a closing date, so presumably the Mint Julep is in season all year round for this group!)

And don’t forget June 1, which is Mint Julep day at New College, Oxford.  How did that happen, you ask?  Well, in 1845, one William Heyward Trapier journeyed to England with several casks of bourbon as part of his luggage (he clearly wasn’t a Scotch drinker).  He visited New College, where he “was surprised to find out that nobody . . . knew how to make a Mint Julep.”  So he tutored them.  Ever since then, they’ve observed the day in his honor.  For years, they even reserved a chair for Trapier, just in case he might happen to return for a swig of julep with the boys.

How about here at Kitchen Riffs Central?  When do we drink Mint Juleps?  Well, this is such a great warm-weather drink, I’ll happily quaff it anytime I have fresh mint in my garden and the temperature starts moving into the “I need to cool off” zone.

My mint is lush and rampant at the moment, thank you very much, and the thermometer has topped 80 degrees Fahrenheit.