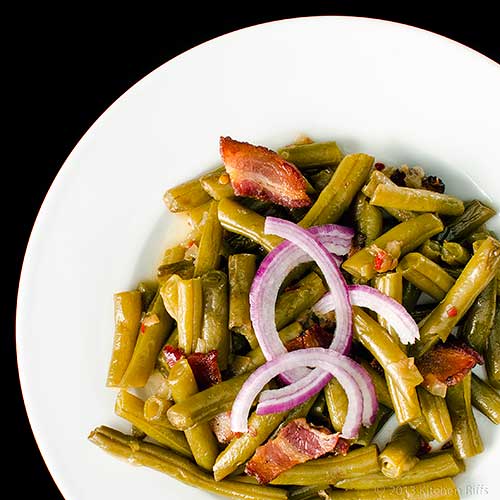 When we serve green (string) beans these days, most of us cook them quickly (and minimally).  The idea is to preserve their fresh flavor — and let the beans retain a brilliant green hue.  Some people cook them so little that the beans still retain a bit of crunch.

But this recipe takes the opposite approach:  the beans slowly braise at low heat for at least 6 hours.  The result is green beans that are meltingly tender.  And the flavor?  It’s magnificent (almost haunting), enhanced by the bacon and onion that cook along with the beans all those hours.

This dish was once quite popular in the southern US states, and even outside them.  It’s an old-timey recipe that always seemed to be the specialty of a beloved grandmother or aunt.  Nowadays, it’s not seen all that much, which is too bad.  Admittedly, it’s a dish you wouldn’t want every week — most of us don’t have time to cook it that often, and the bacon does carry a caloric hit.  But it’s perfect for special occasions.

In the US, we’ll be celebrating Memorial Day on May 27 — and that’s always the unofficial start to summer eating.  This dish would be ideal for the barbecues, picnics, and cookouts that we’ll be attending or hosting.  So maybe (at least once this summer) you should release your inner grandmother and make this dish.

It does take a while to cook, but the (delighted) response you get will be instant. 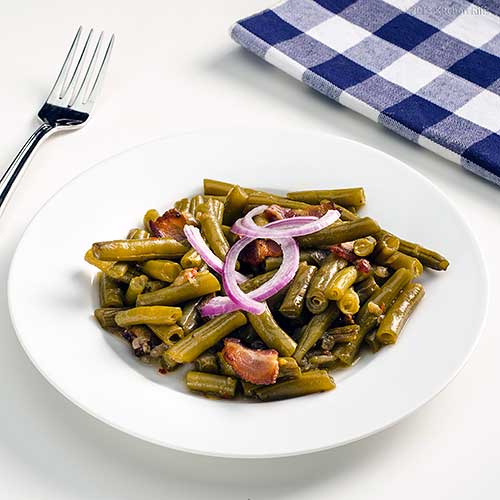 For this recipe, it’s best to use big, mature green beans — they stand up better to long cooking than smaller, thin ones.  Most of the green beans we buy today, by the way, are stringless, even though we still call them “string” beans.

Pork fat is an important ingredient in this recipe; it provides flavor and savor, and really makes the dish.  I’m using bacon, but I’ve had versions made with salt pork.

Although you can cook this dish on top of the stove at the barest simmer, I find it easier to cook in the oven at low heat (225 degrees F).  With today’s well-insulated ovens, you won’t overheat the kitchen, even if you cook it during the hottest part of summer.

Prep time for this dish is about 20 minutes.  Cooking time is at least 6 hours, and I sometimes let it braise 9 or 10 hours (or even overnight).  This dish reheats well, so you can make it ahead.  It also tastes good served at room temperature.

This recipe yields about 8 side-dish servings. 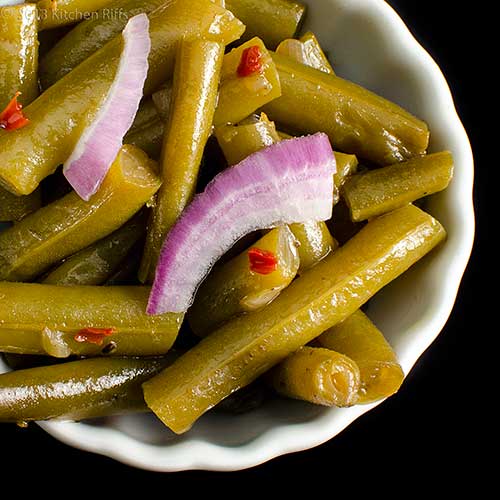 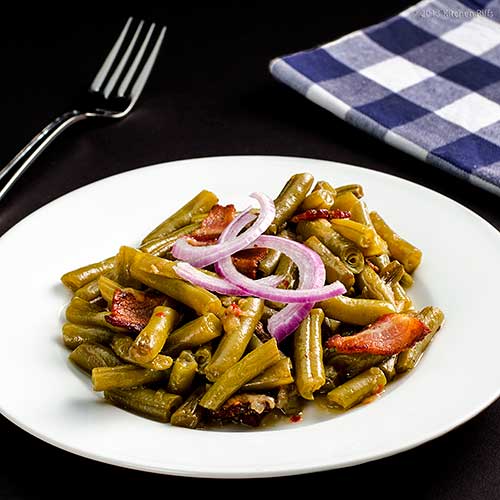 A Taste of Home

“These Southern Green Beans are great,” said Mrs. Kitchen Riffs, helping herself to seconds.  “Almost as good as the ones my aunt used to make.”

“Yeah, she was a terrific cook,” I agreed as I dished up another round.  “Her gooseberry pie was legendary!  I never got that recipe from her, alas.”

“But she taught you how to make this dish,” said Mrs K R.

“Yeah, this is the kind of recipe we tend to learn in someone’s kitchen,” I said.  “Not from a cookbook.  In fact, I’ve rarely seen a recipe for this.  And your aunt didn’t really have a recipe either — she just knew how to make it.  I’m lucky she told me how.”

“I wonder why hers seemed to be a little better,” mused Mrs K R.  “Or maybe it’s just my memory playing tricks.”

“No, I think her version was better,” I said.  “Her beans were always fresh from the garden.  That makes a huge difference!”

“So maybe we should grow our own green beans?” suggested Mrs K R.

“No room,” I replied.  “All the raised beds in our garden are filled with tomatoes and other stuff.”

“There’s still space in the backyard to add another raised bed,” she pointed out, helpfully.

I guess I know what I’m doing this weekend.