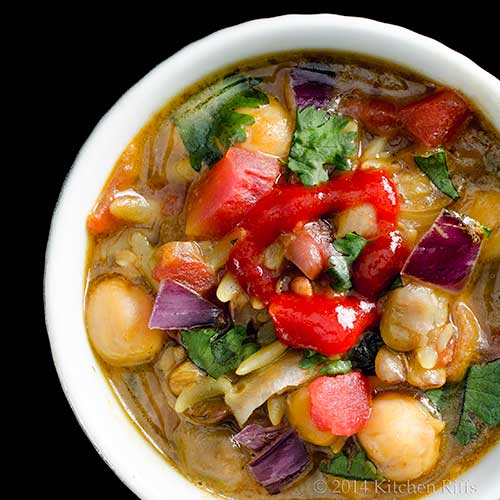 Although this soup can be enjoyed anytime, it comes into its own during Ramadan (the month of fasting during the Muslim year). In Morocco, many people follow the tradition of breaking their fast at sunset with a bowl of Harira.

Ramadan doesn’t come around until late June this year. But you don’t need to wait until then to sample this healthy and delicious soup. A warming dish like this is perfect for the cold weather many of us are experiencing in the US at the moment. Just think of it as springtime in a bowl. 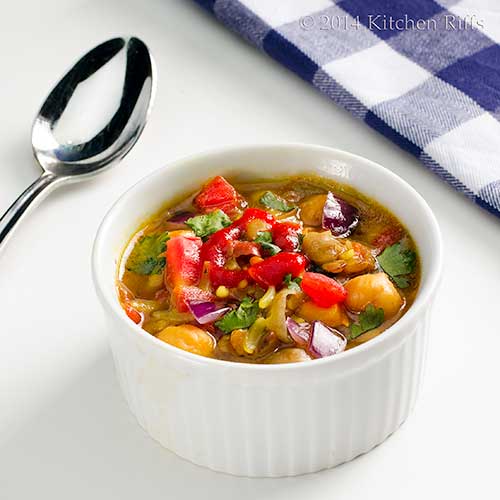 Although there are countless versions of Harira, virtually all of them include chickpeas; many include lentils as well. Meat of some sort (often lamb) typically forms the basis for a broth, and the soup is always flavored with an enticing array of spices and aromatics.

I lived in Morocco years ago—and had countless bowls of this soup. This recipe captures the traditional flavor of the dish, while also being easy to make.

Prep time for this recipe is about 15 minutes, with cooking time of 45 minutes. So allow an hour. You can easily prepare this soup a day or two ahead and reheat it before serving (the flavor will even improve a bit).

The recipe yields about 2 quarts of soup (but see Notes). Leftovers keep for a few days in the refrigerator if stored in airtight containers. Or they can be frozen for up to six months. 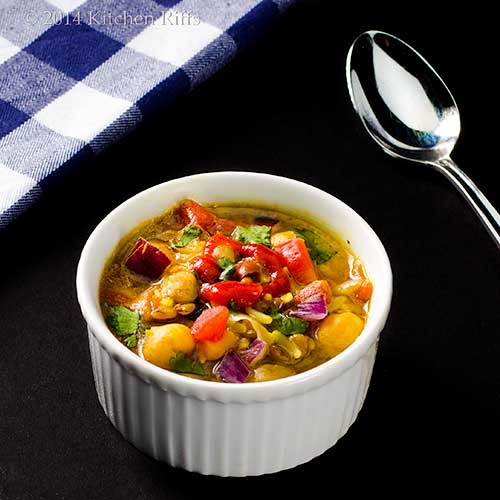 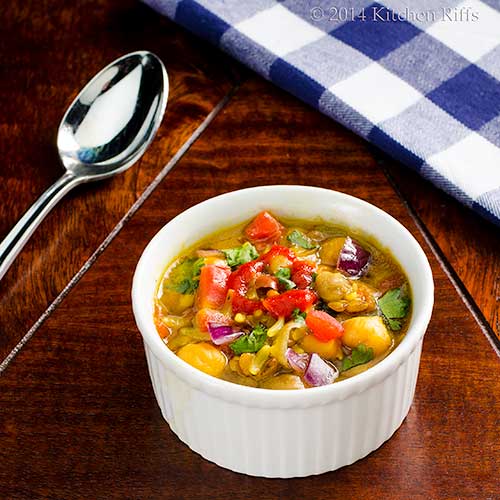 Think of it as Moroccan Chicken Soup

“Brrr,” said Mrs. Kitchen Riffs. “Did you see the weather forecast? We’re supposed to get nearly a foot of snow!”

“Yikes!” I replied. “Sounds like we’ll have some shoveling to do.”

“We’ll be cold and hungry when we’re finished,” said Mrs K R. “Lucky we have some of that great Moroccan Chickpea Soup in the freezer.”

“Yeah, Harira has such an interesting flavor,” I said. “And it’ll warm us up.”

“Maybe we should have the soup before we shovel snow,” I said. “So at least we’ll start out nice and warm.”

“Yeah, and garnish it with ibuprofen,” said Mrs K R. “Sriracha is tastier, but Vitamin I is probably more effective.”