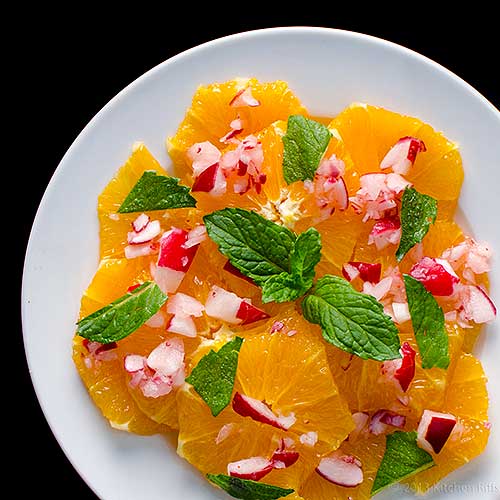 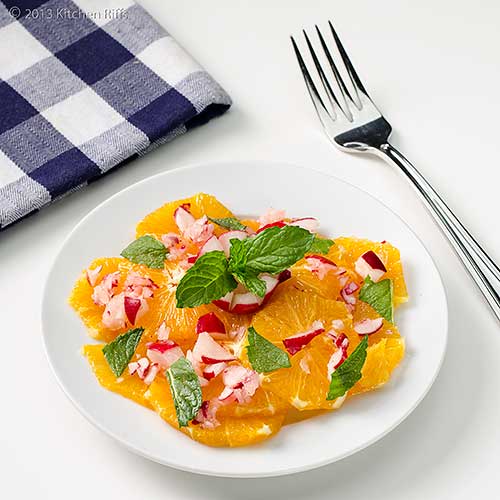 Years ago — when I was just out of college — I lived in Morocco, and that’s where I first ate this salad.  This dish, which is served throughout the country, has countless variations.

Moroccan meals traditionally don’t start with the sort of lettuce-based salad that is common in the US.  Instead, at the beginning of a meal, the host sets a variety of dishes on the table.  The mix typically includes salad-type dishes like this, but also plates of olives or vegetables.  And everyone helps himself to a bit of whatever looks good.  Once the diners have taken the edge off their hunger, the host generally removes some (but not all) of the dishes.  Then the main course — usually a tagine (stew-like dish) that includes some meat or fish — will appear.  This Orange and Radish Salad is one of the dishes that’s likely to stay on the table throughout the meal, thus serving as both starter and side dish.

This recipe calls for an ingredient that many people don’t usually have on hand:  orange blossom water (a/k/a orange flower water), which is "a clear, perfumed distillation of fresh bitter-orange blossoms”. Although rarely seen in Western cooking, this ingredient is worth seeking out. It’s available in all Middle-Eastern grocery stores, as well as many specialty markets. It’s also readily available online — just do a search for it.

You can make this recipe without orange blossom water (and in Morocco I had it without several times). But the dish is so much better with it — orange blossom water has a wonderful fragrance and flavor. So you really owe it to yourself to track it down. Besides, once you have it on hand, you can add a bit of it to your Homemade Grenadine the next time you make some!

My recipe is adapted from Paula Wolfert’s 1973 Couscous and Other Good Foods From Morocco. A couple of years ago, Wolfert updated and expanded the book, retitling it The Food of Morocco. I don’t own the newer version, but I did check it out from the library just to see what it was about. It’s essentially the same book, but with some new information and many new recipes. If you’re looking for a good basic book about traditional Moroccan cooking, there’s no better source that I know of in English.

This recipe takes about 20 minutes to prepare, and it benefits from some resting time (no more than half an hour — see Step 2). It will serve 4. 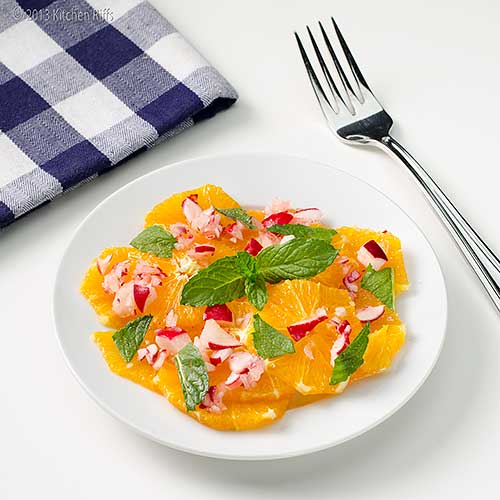 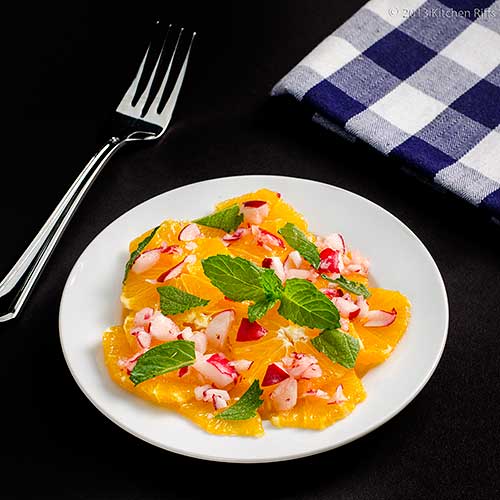 “You haven’t made anything Moroccan in years!” said Mrs. Kitchen Riffs as she tucked into her Orange and Radish Salad.  “You really should do more of it — this is so good!”

“You’re right,” I agreed between mouthfuls.  “Our cooking kinda goes in waves sometimes — we get going in one direction, and forget about other things.”

“I’d say you’ve forgotten about Moroccan for way too long,” she replied.  “We need more dishes like this.”

“OK, but I’ve got loads of other stuff I need to post about,” I said.  “I still have more salads to make in the next couple of weeks — including that great mayonnaise one I promised everyone a few posts back.”

“Well, I’m sure you can fit another Moroccan salad into the mix, can’t you?” Mrs K R inquired.  Sweetly.  But with that tone every spouse knows.

So, um, expect another Moroccan dish — sooner rather than later.