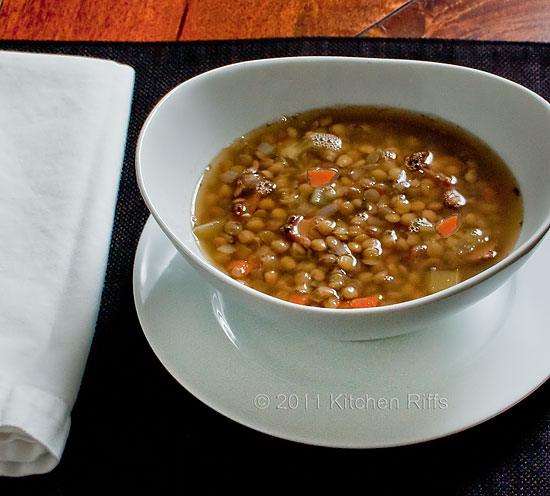 Lentil Soup with Bacon and Rosemary

Lentils have exceptional ”nutritional value and health benefits”.  They are the second-highest source of vegetable protein (soy beans are first), have loads of fiber, and contain significant amounts of iron. Health.com,  Health magazine's online home, suggests they are one of the world’s five healthiest foods (also on their list are olive oil, soy, yogurt, and kimchi; yeah, that last one surprised me too).  Because lentils are protein-rich, they are favorites in countries where lots of people are vegetarians.

There are several varieties and colors of lentils.  Sometimes lentils are split to become dal.  In India (which leads the world in lentil consumption), lentils are most commonly eaten as dal.

Light-colored and red lentils predominate in the Near East and Asia.  In France, green “lentilles du Puy” are sought after.  In the United States, common brown lentils are what we usually find in the supermarket.

Lentils are also one of our oldest known foods, dating back to 8000 B.C.  They have been found in Egyptian royal tombs at Thebes.  They are mentioned several times in the Bible, most famously in the book of Genesis, when a famished Esau comes in from working the fields and sells his birthright to his younger brother Jacob in exchange for a “pottage” of lentils.

Jacob must have cooked a mean bowl of soup.

Well, so can you!

Unlike other dried legumes, lentils require no lengthy soaking — just some quick cleaning.  The brown lentils we’re most apt to see in the grocery store are clean and well packaged, but they do require a quick picking over to make sure no rocks have snuck into the bag.  And then a quick wash to rinse off the dust.

I find sorting is easiest if I dump the lentils into a pile on one end of a sheet pan (the type with one-inch sides).  I just scoot each lentil from the pile to the other end of the pan, removing any foreign matter I spot along the way.

Next, I rinse the lentils.  I generally put them in a large strainer and use my kitchen sink’s vegetable sprayer.  You could also place them in a bowl, cover with water, and then drain.

Once rinsed, they’re ready for the pot.

Lentils (or any legume) take longer to cook if they’re older (and thus drier).  But brown lentils don’t take long to cook in any case, so that’s not much of a problem.  In fact, the opposite sometimes can be a concern:  If brown lentils overcook, they’re likely to lose their shape and turn mushy.  Though for soup, of course, that’s not really a worry.

This recipe is easy to prepare and will be table-ready in less than an hour.  Add a salad and some hearty bread, and you have a complete meal.

If you want a more substantial soup, you can add some cooked rice or small-sized dried pasta (ditalini, acini di pepe, orzo) for the last ten minutes of cooking.

If you want to make this soup vegetarian, substitute ½ to 1 pound of sautéed mushrooms for the bacon (and use vegetable stock base rather than ham or chicken if you want to add extra flavor). 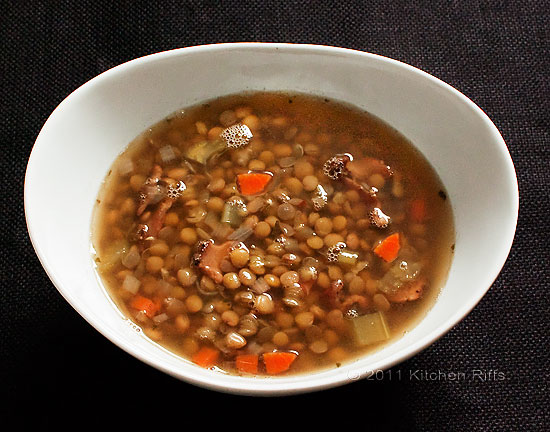 Soup isn’t the only way to serve lentils, though it’s probably the most common way these legumes are prepared in the United States.  Lentils can also be cooked as a vegetable side dish to accompany a roast or other main course.  That’s how they typically are prepared in France.  Lentils can also be made into stew.  In fact, Indian dals run the gamut from soupy to stewy.

Lentils are an important daily food in many vegetarian cultures.  Sometimes they’re served at every meal.  But a lot of Americans still don’t view lentils as everyday fare, even though the United States is one of the top 5 producers of lentils in the world (India and Canada are the biggest by far).

Per capita consumption of lentils in the US was very low until World War II.  Then it increased rapidly as Americans were encouraged to substitute protein-rich lentils for meat to help the war economy.  Today, we eat lentils because they’re tasty and versatile.

The Kitchen Riffs household certainly does its bit.  I just checked, and we have 6 (six!) different varieties of lentils in our pantry (mainly in the form of dal, for Indian recipes).  You could say we’re lentil crazed.

Yeah, crazed!  Hey, if some sucker shows up ready to trade his birthright for a bowl of lentil soup – well, I’m ready!

And now you are too.

Posted by Kitchen Riffs at 4:20 PM