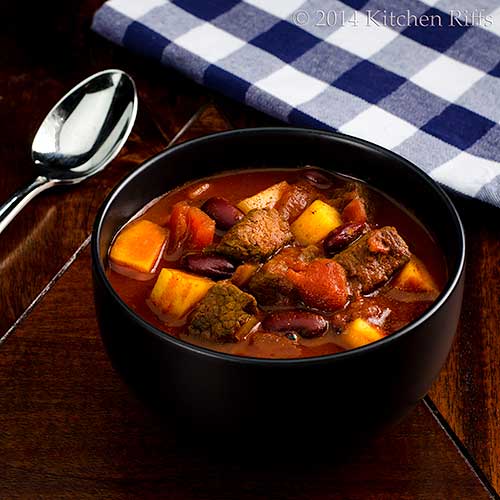 Need some down-home cooking to combat the cold weather we’re having throughout much of the US? Well, there’s nothing better than good old meat and potatoes.

We could just fill our plates with a slab of beef and a mound of spuds. But why not go for something with more flavor? Like this chunky Meat and Potatoes Chili. It has all the savor of traditional meat and potatoes, with the zing of chili. Win win.

And speaking of winning, if you haven’t already planned your eats for the Super Bowl festivities, this would be a great dish to prepare. You can cook it a day ahead, then reheat it—so you won’t miss a minute of the game. That’s a touchdown in my book. 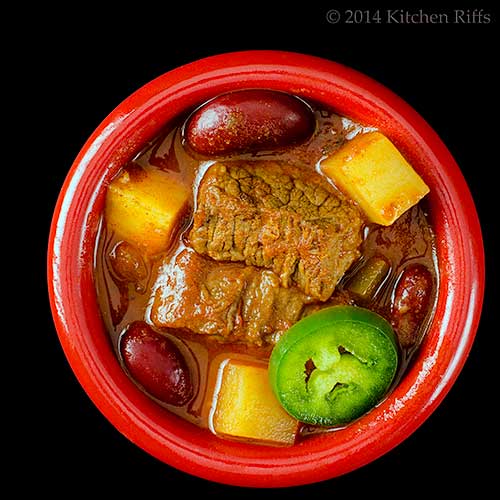 To emphasize the beefiness of this chili, I’m using meat cut into chunks (rather than ground into hamburger). The potatoes also are cut into good-sized pieces, so this is a dish with texture.

Much of the flavor in this chili comes from dried, powdered red chilies—i.e., chile powder. This differs from chili powder, which is a mix of chile powder, plus cumin, coriander, and other flavorings. I discuss this in more detail in our post on Chili Basics. See Notes below for a discussion of chile powder possibilities for this recipe.

Prep time for this recipe will vary depending on how quickly you work. The most time-consuming process is cutting up the beef and browning it (you can save time if you buy the meat already cubed). Figure on a good 20 minutes for cutting up the meat, and at least another 20 for browning it. While you’re browning, you can do much of the other work, so total prep should take you under an hour. Cooking time adds another couple of hours (mostly unattended). BTW, you can cut up and brown the meat ahead of time, then proceed with the recipe the following day. Or you could cook the whole dish a day ahead, and then reheat it right before serving.

This recipe yields a lot—at least 4 quarts, and probably more like 5. So it will feed a crowd. Leftovers freeze well when stored in airtight containers. 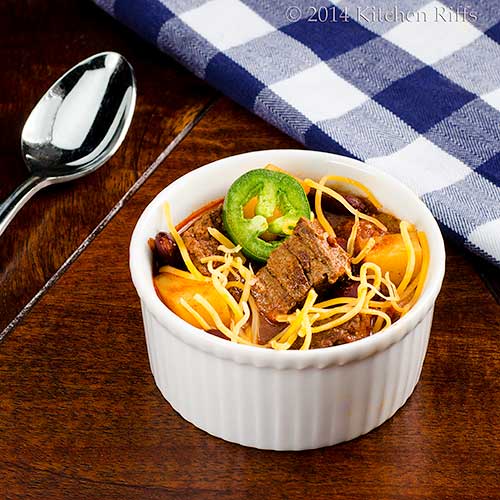 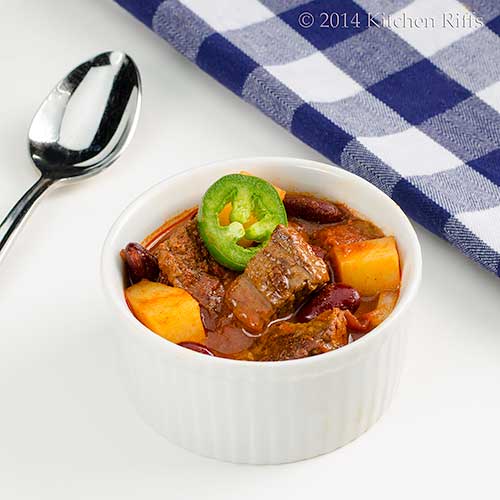 “Lots of good texture with the beef and potato chunks,” I said. “Plus they contrast so well with the fiery chile.”

“Speaking of which,” said Mrs K R, “I suppose you’re getting fired up to watch the Super Bowl.”

“Just a week away,” I enthused. “Denver versus Seattle—this should be a classic.”

“And as I understand it, the game is being played in New Jersey,” said Mrs K R.

“Yeah, where the New York City teams play their home games,” I said.

“Why don’t they play in New York?” she asked.

“The NFL moves in mysterious ways,” I said. “Although one of the New York state teams plays their home games in New York.”

“The Bills,” I said. “They play in Buffalo. Except when they don’t. Then they host their games in Toronto.”

“And you wonder why I don’t understand football,” she said.