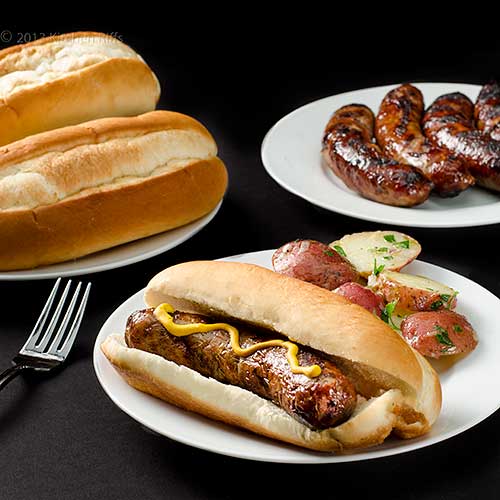 Bratwurst tastes great anytime. But in the US, peak brat-fry season starts on Labor Day.

That’s partly because brats make such a great entrée for holiday cookouts. But Labor Day also marks the beginning of football season in the US. Which means tailgating season, where bratwurst is often the star attraction.

What about that “fry” thing in the subtitle, though? Well, no worries. There’s actually no frying involved here, just grilling. (And maybe some pre-simmering).

The term “brat fry” originated in Wisconsin, BTW—where bratwurst is one of the major food groups. 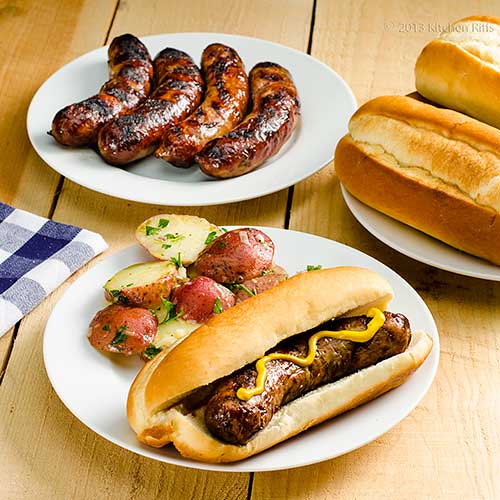 Bratwurst is a sausage that’s usually made fom veal, pork, or beef. It originated in Germany—where Brät means finely chopped meat and Wurst means sausage. Wikipedia says that in modern German, the “brat” part tends to be associated with braten, a verb that means “to pan fry or roast” (and of course you can pan fry brats, though in the US they’re more often grilled).

The best-quality brats will be raw when you purchase them (you’ll see precooked ones, but don’t bother). When you grill raw brats, they take a good 15 or 20 minutes to cook. And grilling from the raw state can be a bit tricky—you don’t want the casing (skin) to burst, so you have to be careful with the heat.

In places like Wisconsin—where eating bratwurst is practically a way of life—cooks generally simmer brats in a fragrant mixture of beer and onion before grilling them. So by the time the brats hit the flames, they’re basically done. At that point, you just need to grill them for several minutes to brown them (and char them lightly, if that’s your inclination—as it is mine). If you’re grilling bratwurst for a crowd, you may want to cook your brats ahead of time. In that case, you’ll hold them on a low simmer in a “batter” (that’s what they call it in Wisconsin) of beer, onion, and often butter. (See Notes for recipes.)

Brats tend to be larger than hot dogs, so many people say you should serve them on brat rolls—which are like hot-dog buns, only bigger. In Sheboygan (home of high-church bratwurst consumption), people often serve brats on “hard rolls.”  Despite the name, these rolls actually are soft—and large enough to hold two brats side by side (they have a convenient split down the center of the crown that makes it easier to cut the bun in half if you want to serve brats one at a time rather than in pairs).

If you can find actual bratwurst rolls, they’re worth buying. Otherwise, your market may offer deli rolls that look like oversized hot-dog buns (I used some in the pictures for this post). Don’t sweat it if you can find only standard hot-dog buns. I lived in Wisconsin for a few years, and most of the brats I was served there were on hot-dog buns. Authenticity can be good, but I never let it interfere with eating.

My recipe calls for simmering brats in beer, then grilling. (You can skip the simmering if you want, and just grill, though you’ll miss out on a bit of flavor). This recipe makes enough to serve 6 (or 3 hungry Sheboyganites), but buy as many brats as you want — it’s easy enough to adjust the quantity of simmering liquid.

It takes about 20 minutes to simmer the brats, another 5 minutes or so to grill them. So figure on maybe 30 minutes altogether. See the Notes for instructions on how to cook ahead and hold. 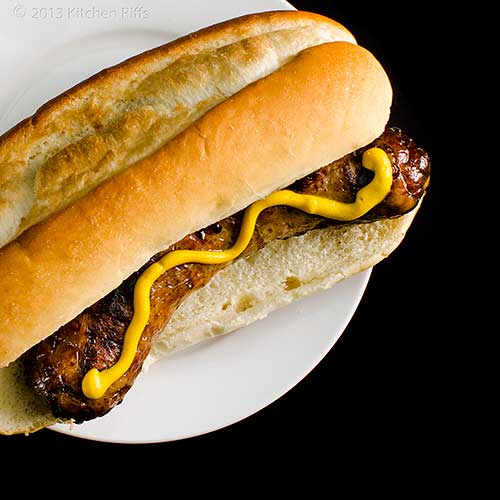 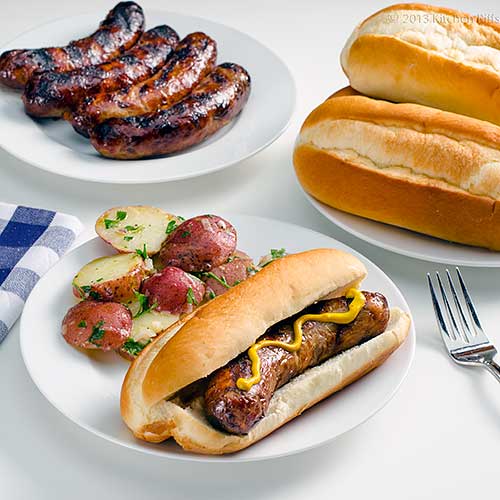 “Wonderful,” said Mrs. Kitchen Riffs as she bit into her mustard-slathered brat. “And this goes great with the French Potato Salad you made.”

“I suppose German Potato Salad with Bacon might be the best choice of all,” said Mrs K R. “But Horseradish Potato Salad would be swell too.”

“I probably should have made some coleslaw,” I said, gobbling more brat. "Garlic Coleslaw would be excellent with these. Although it’s hard to turn down Creamy or Jalapeño Coleslaw.”

“There are lots of side dishes listed on our blog index,” said Mrs K R. “No need to run through everything that would be brat-fry appropriate!”

“I was going to stop at Baked Beans with Bacon,” I said, fixing myself a second brat. “But you’re right. We have more important things to discuss—like football season! For most teams it starts on September 8th this year. I can’t wait.”

“I can,” said Mrs K R. “I guess you’re going to plant yourself in front of the TV again every Sunday afternoon.”

“Well, sure,” I said. “It’s the American way. Just be glad I’m not a fan of college football—otherwise it would be every Saturday afternoon, too.”

“OK, I can live with Sunday gridiron, just as long as you don’t make me watch any games,” said Mrs K R. “And provided you cook up bratwurst for a couple of tailgate-style picnics.”