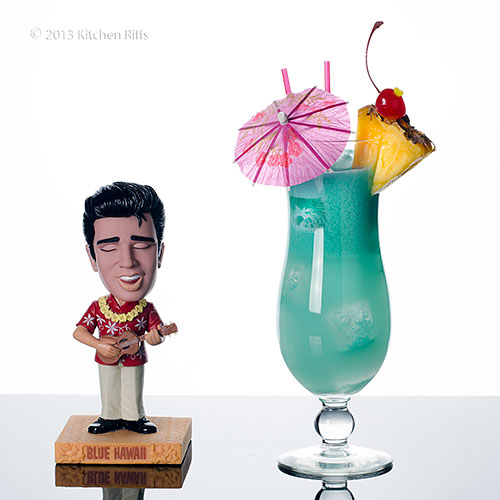 Hawaii was on fire in the early 1960s. And not just from volcanoes. It had become a state in 1959, the 50th to join the US. Then Elvis Presley made a hit movie called “Blue Hawaii” in 1961 — just as a cocktail of the same name was gaining popularity.

These events combined to generate a burst of interest in the Hawaiian islands, at the same time that jet travel was making them accessible to mainlanders. The Elvis movie in particular highlighted the beauty and fun available in what was (for most people) still an exotic part of the world. It also didn’t hurt that Tiki restaurants — very popular at the time — were drawing attention to Polynesia, the ultimate source of Hawaiian culture. No wonder Hawaii became such a popular vacation choice (and has remained one ever since).

But even if you can’t jet off to Honolulu, you can still enjoy a taste of tropical paradise with this blue-hued drink. Mix up a round and let your imagination set the scene: pristine beaches, cloudless skies, sighing surf. Elvis bobblehead optional. 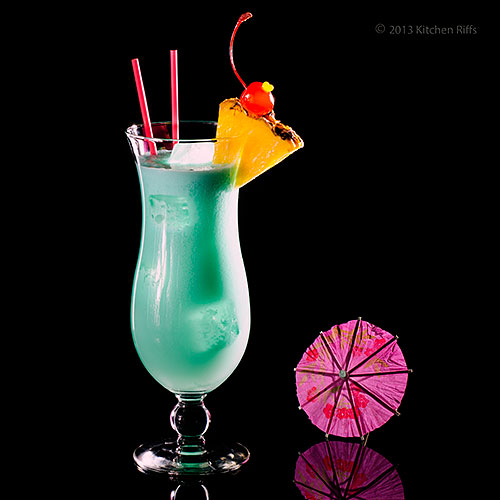 Many people assume the Blue Hawaii Cocktail got its name from the Elvis movie. In fact, however, the drink preceded that movie’s release; it was created in 1957 by Harry Yee, a bartender at the Hilton Hawaiian Village.

The drink did have a Presley connection — just not the obvious one. Yee actually named his cocktail after a 1937 song that Bing Crosby made famous in the film “Waikiki Wedding.” Years later, Elvis sang the same song in his film — and it gave its name to his movie.

So it’s complicated. But the name confusion doesn’t stop there. Because there are in fact two different blue cocktails with almost identical names: The Blue Hawaii Cocktail, and the Blue Hawaiian Cocktail. What’s the difference between them? Well, the Blue Hawaiian always contains cream of coconut (Coco Lopez) and is usually served frozen (whirled in a blender with ice). The Blue Hawaii is never frozen (it’s served over ice) and usually doesn’t contain coconut flavoring (though this does sneak into some recipes — more on that in the Notes).

This brings us to yet another source of confusion: the multitude of different recipes you’ll find for the Blue Hawaii. Well, don’t let all that confusion put you off. I’ve tested many of the Blue Hawaii recipe variations, so you don’t have to. My favorite? The one that Jeff Berry — aka Beachbum Berry — champions in Beachbum Berry Remixed. In the Notes, I discuss a couple of other recipes in case you’d like to try them (including one for the Blue Hawaiian). 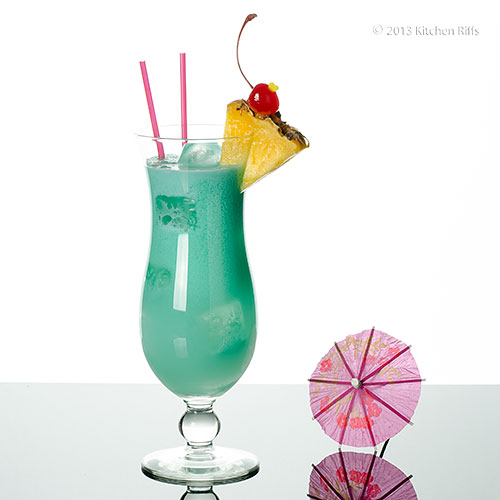 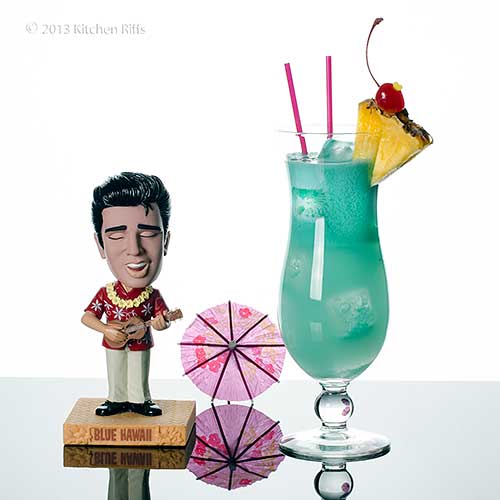 Tiki Month, from the Top

“Gosh, Tiki month has been fun!” said Mrs. Kitchen Riffs, taking a sip of her Blue Hawaii. “I’ll be sorry to see it go.”

“Me too,” I said. “We made a lot of great dishes for the Pupu Platter. That Crab Rangoon was wonderful! And I loved the color of the Grilled Pineapple.”

“Don’t forget Candied Bacon,” said Mrs K R. “That’s my favorite platter item. Although I have to admit that Shrimp Toast Dip was pretty good too, especially in those little cucumber boats.”

“And all those great Tiki-style cocktails we featured — like this one,” I said, holding up my Blue Hawaii. “This is right up there with the Hula Hula.”

“My favorite Tiki drink from this month was the Scorpion,” said Mrs K R. “Though it’s hard to beat the flaming presentation on the Volcano Bowl.”

“Yeah, it’s all been fun,” I agreed. “And though Tiki month is coming to a close, we still have one more drink to go in our Summer Sippin’ Series — which this year extends to the Wednesday after Labor Day.”

“And what drink would that be?” asked Mrs K R.

“Well,” I said, “since we honored the 50th state with the Blue Hawaii, I thought it would be only fair to do the same for the 49th state. So we’ll be doing The Alaska Cocktail.”

“Perfect,” said Mrs K R. “I wouldn’t mind a harbinger of cooler weather. And we had a great time when we visited Alaska a couple years back. Remember the lumberjack show and the great totem poles? Not to mention bald eagles and whales and sea otters!”

Ah yes, I do recall. It was far from the tropics, but still a vacation paradise. Wonder where I can get a lumberjack bobblehead.