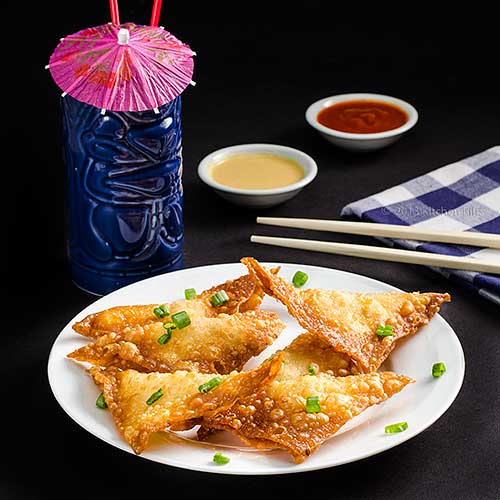 Queen of the Pupu Platter

This August is Tiki Month here on Kitchen Riffs!  All the food and drinks will be Tiki-themed.  First up?  Crab Rangoon — crisply fried dumplings filled with a savory mix of cream cheese and crab.  You won’t be able to eat just one!

Crab Rangoon is a staple of the Pupu Platter (the appetizer assortment that’s ubiquitous in Tiki- and Polynesian-themed restaurants around the world).  In the US, you’ll also find this dish at more than a few Chinese-American restaurants.

And by the way, have you ever wanted to make your own Pupu Platter?  Well, you’re in luck!  All our food posts this month will feature recipes that are platter-appropriate.

So dust off your Tiki torches and flower leis, and start planning your next backyard party.  The guests will go wild over your Pupu Platter — especially its star, Crab Rangoon. 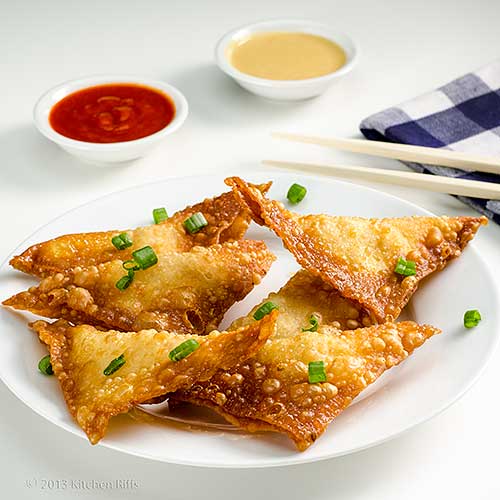 Most of us haven’t tasted Crab Rangoon outside of a restaurant, but it’s really easy to make.  The biggest hurdle?  It requires deep frying — something most of us rarely (or never) do.  But it’s not hard, and I’ll provide a lot of tips in the Notes.  If you fry properly (which means at the right temperature for the correct amount of time), the food absorbs very little oil.  Which means it’s much healthier than you might think.  And if the idea of frying still turns you off, no problem.  In the Notes I link to a recipe that allows you to bake, not fry, Crab Rangoon.

Crab Rangoon is usually served with a dipping sauce.  Chinese mustard is a common one, and quite easy to make.  (I provide a recipe for it in the Notes.)  Less traditional but equally tasty is Sriracha sauce (serve it straight from the bottle or thin with a bit of water if you want a less spicy sauce; you can even use ketchup if you want to add a bit of additional sweetness). Other traditional favorites for dipping include duck sauce, sweet plum sauce, and sweet-and-sour sauce. Check the Asian aisle at your grocery store — most will stock at least one of these. Crab Rangoon would also pair well with our Plum Salsa.

Prep time for this recipe is about 15 minutes, with additional cooking time for each batch about 3 minutes. You’ll be frying several batches, but 30 minutes total should be more than enough time.

This recipe yields about 2 dozen Crab Rangoons, but it’s easy to double or triple if you need more.

Leftovers? There probably won’t be any. But if there are, you can refrigerate them and microwave to reheat. They won’t taste nearly as good as freshly fried, but they’ll be OK. 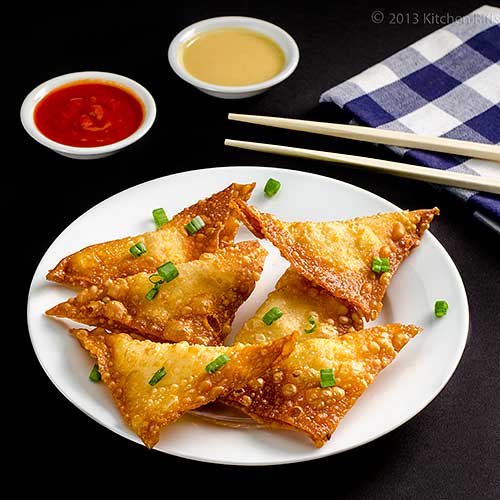 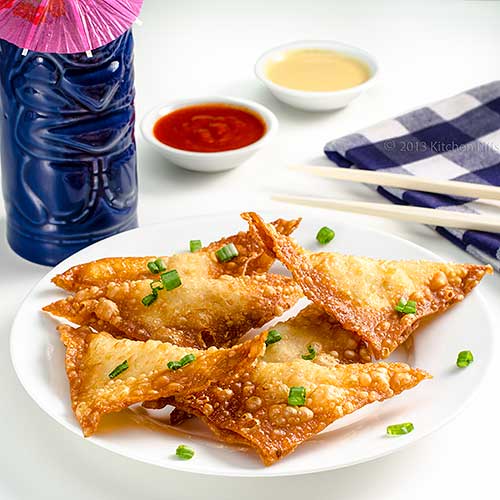 “Gosh, these are good,” said Mrs. Kitchen Riffs as she bit into a Crab Rangoon piece.  “I love these hot and crisp from the fryer.”

“Nothing better,” I agreed, reaching for another piece.  “And I love dipping them in sauce.  Both the Chinese mustard and the Sriracha are great, though now I’m wishing I had made some duck sauce too.”

“Next time,” said Mrs K R, forking herself some more Crab Rangoon.  “So, what drink will we be having to kick off Tiki Month?”

“One of the classics,” I said.  “The Volcano Bowl.  I’ll be posting about it later this week.”

“You mean the one that kinda sorta looks like a fiery volcano?” she asked.

“That’s the one!” I said excitedly.  “It’s big enough for two or more people.  And it’s usually served with the ‘volcano’ actually flaming.”

Wiping my chin, I added, “I just love Tiki Month!”

“They’re the guys who make our fire extinguisher.”