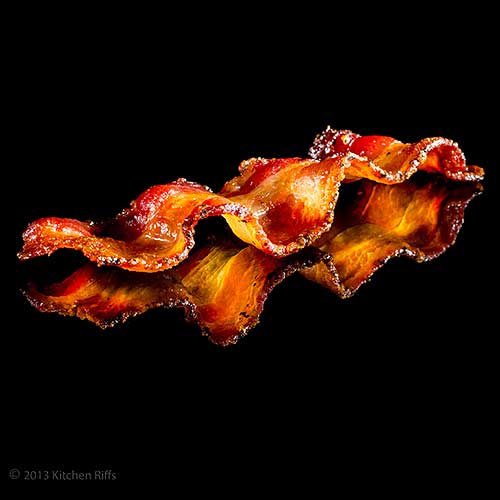 The deep, succulent flavor of glazed bacon makes for a great party snack

OK, not really.  But sometimes we need to be reminded that bacon is more than just a breakfast side dish or a faithful flavor enhancer.  It can shine all on its own — as it does in this quick and simple recipe.

Add a bit of brown sugar to bacon, then bake until it’s crisply glazed.  Result?  A sweet-and-savory finger food that’s perfect for munching as a party appetizer or as a snack with cocktails.

Its piggy goodness would be a great addition to a Pupu Platter, that assortment of starters served in Tiki- and Polynesian-themed restaurants.  And since August is Tiki Month here on Kitchen Riffs, what could be better than an appetizer recipe that’s platter-able?

This dish is a snap to prepare, you can make it ahead of time, and it’s beyond delicious.  Magic, I’d say.  Oh, and it has one other magical property:  When your guests try it, it disappears. 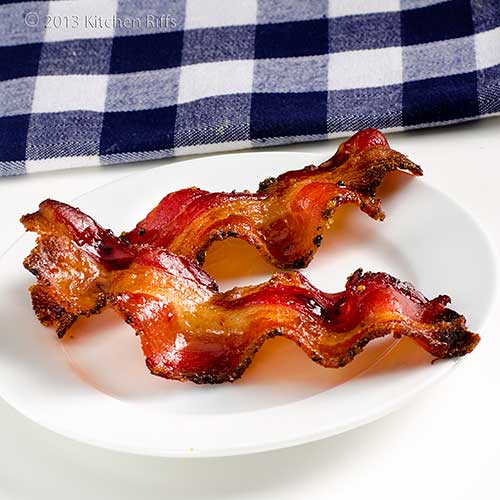 To make this dish, you coat each piece of bacon with brown sugar, then bake until everything is nice and crisp.  Easy peasy.  Want extra sweetness?  Wait till the bacon is mostly done, then brush on a coating of maple syrup (see Notes).  Want more spice?  Add some cayenne pepper to the brown sugar coating (again, see Notes for more details).

Because bacon is the star of this dish, you want to use good quality.  I use a pepper-coated bacon from Burger’s Smokehouse, a Missouri producer of smoked meats. Since I live in St. Louis, I can find it in some of my local supermarkets (you can also buy it mail order, but it’s a bit expensive that way). There’s probably another premium-brand bacon that’s available where you live; if you can’t find something that’s pepper-coated, a nice apple wood-smoked bacon would be excellent.

Recipes for this dish suggest oven temperatures ranging anywhere from 300 to 400 degrees F. I prefer 375 F. At that temperature, cooking time is about 20 minutes. (It can vary a bit though — so you have to keep your eye on the bacon as cooking nears completion.)

Prep time for this dish is about 5 minutes, so if you allow 30 minutes total, you should have plenty of time. You can make Candied Bacon several hours ahead — just keep it at room temperature in a serving dish. You can also make it a day ahead and store it in an airtight container at room temperature (no need to refrigerate); the bacon will probably be less crisp, however.

My recipe calls for a pound of bacon, but you can easily adjust the quantity up or down to meet your needs. Often when I want a snack, I’ll do just a few pieces. 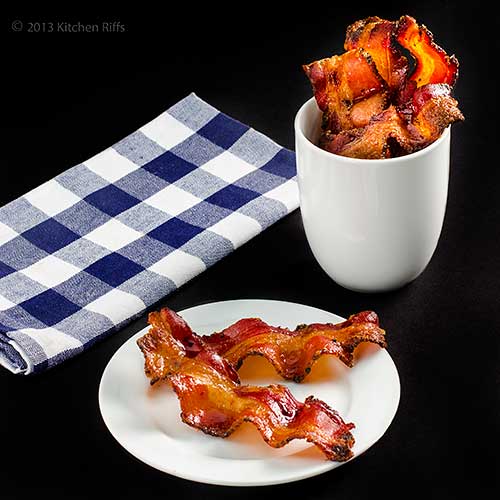 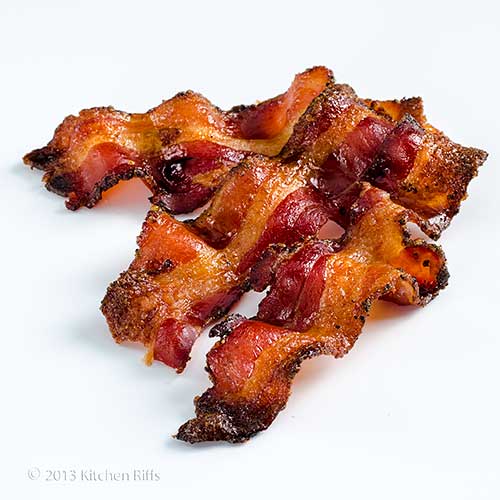 “Yum!” said Mrs. Kitchen Riffs as she picked up another piece of Candied Bacon.

“Yum is right,” I replied, reaching for another slice of my own.

“These taste so good with Tiki cocktails,” she said.  “Is Candied Bacon traditional on Pupu Platters?”

“There’s often bacon in some form,” I replied.  “Bacon-wrapped grilled pineapple, or bacon-wrapped something.”

“Though I actually like to think of Candied Bacon as a substitute for Chinese Spare Ribs, which are a Pupu classic,” I continued.  “Bacon is less messy, since you have no bones to dispose of.  And it’s a bit easier to prepare.”

As I finished my explanation, Mrs K R casually picked up the last slice of Candied Bacon.  “Here’s another question,” she said.  “Why did you bake only half the package?  If you’d cooked the whole thing, you could have had another piece.”