Long straws keep your hair away from the flaming “lava”

Tiki drinks strive to be exotic — which is why they’re often served in unique mugs and glasses.  And one of the best Tiki potions is the Volcano Bowl Cocktail (sometimes called the Flaming Volcano).

Traditionally, this drink is served in a communal volcano-shaped bowl (usually one adorned with “South Sea” images — the tackier the better).  It tends to be prepared in hefty quantities — enough for four people (or at least two particularly enthusiastic drinkers).  Everyone sips from long straws to avoid getting singed by the flaming crater at the center of the bowl.

Unless you’ve been to a Tiki- or Polynesian-themed restaurant, you may never have sampled one of these.  After all, your local housewares shop probably doesn’t carry volcano bowls.  And unless you’re serving a crowd, the quantities that most recipes yield are a bit unrealistic for a casual before-dinner drink.

But no worries.  You can easily scale down this recipe and serve the drink in an ordinary glass.

Or, if you’re planning a party, why not go all out?  It’s easy enough to buy volcano bowls online.  And this recipe is perfect for a crowd.

So light those Tiki torches, don a flower lei, and mix up a Volcano Bowl Cocktail.  (Just check your fire insurance first.) 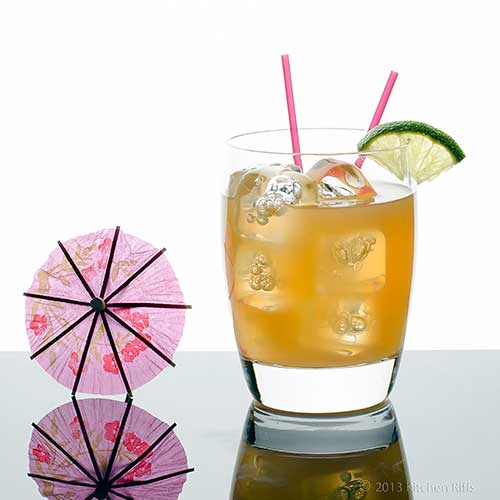 This recipe contains 6 ounces of booze and almost 10 ounces of other ingredients, so it makes a lot — at least enough for 2 people, and still generous for 3.  If you don’t want that much, it’s easy to cut the recipe in half (or less) for a “glass” rather than a “bowl” sized recipe.  The pictures accompanying this post show both.

But this drink really is fun to serve in a volcano bowl, particularly at a party.  If you can’t find a volcano bowl locally, you can buy one from Amazon (that’s where I got mine). While you’re at it, you may want to order some long (17-inch) straws so you and your guests can drink from the bowl (Amazon advertises these prominently when you search for the bowl).

Your handy volcano bowl will work with other Tiki drinks, too — though you’ll probably need to double or triple their recipes. The bowl I’ve linked to holds 32 ounces. You’ll fill about half of it with ice, so you’ll need about 16 or so ounces of liquid to fill it properly.

There are many Volcano Bowl recipes out there, but I trust Jeff Berry (a/k/a Beachbum Berry) when it comes to Tiki. The recipe I use comes from his Beachbum Berry Remixed. And BTW, if you have any interest in Tiki drinks, you need this book.

The Volcano Bowl Cocktail takes several minutes to mix, and serves 2 to 4. You can serve it either in a bowl (volcano shaped or otherwise) or in glasses. 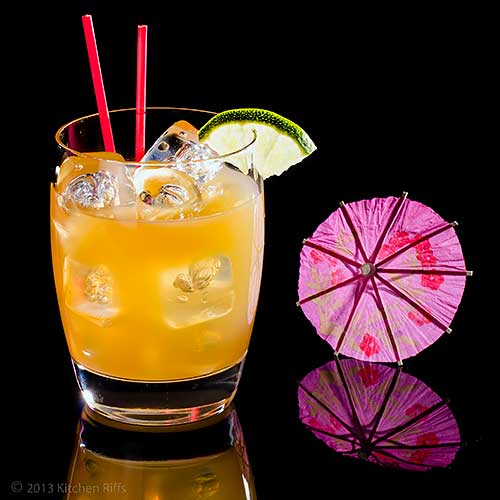 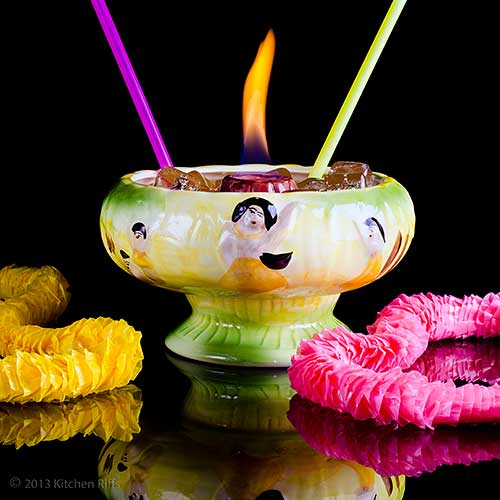 “That’s quite a flame!” said Mrs. Kitchen Riffs after I (nervously) lit up our Volcano Bowl Cocktail.  “I’d say you’re playing with fire there!”

“It is,” I replied, relieved that I hadn’t set our table ablaze.  “Look at it flicker – it’s going like a house on fire!  Must be a draft somewhere.”

“Say, this isn’t a bad drink!” mused Mrs K R as she took a sip through her long, neon-hued straw.  “Puts fire in my belly.”

“It sorta reminds me of a Mai Tai,” she added. “That’s another cocktail that’s really on fire these days.”

“Hey, we could serve Mai Tais in this volcano bowl someday!” I said. “Or would that be too many irons in the fire?”

“Why not?” said Mrs K R. “We could also try filling it with Planter's Punch. Or almost any Tiki or tropical drink. Maybe we should do that at our next party — it would set the world on fire!”

The flame on the volcano bowl sputtered and flared up momentarily. Mrs K R and I looked at each other and giggled. Then we shouted in unison, “Great balls of fire!”