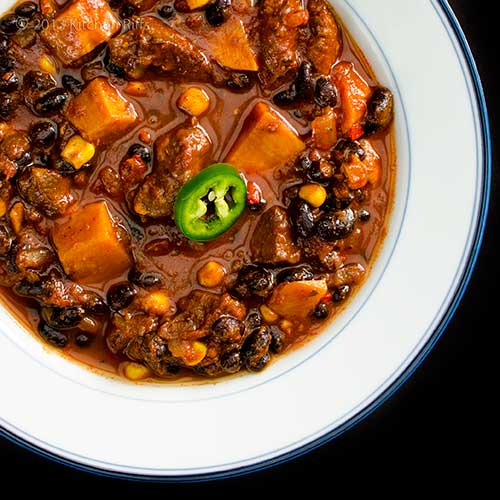 Fall means the beginning of chili season—at least here at Kitchen Riffs central. When the weather turns cooler (as it’s finally beginning to in most of the US), nothing is more satisfying than a hearty bowl of chili.

We like chili season even better when we can try some new variations. Like this succulent recipe. Pork adds a deep flavor that’s irresistible. It also combines beautifully with traditional chili ingredients—as well as some not-so-traditional ingredients, like sweet potatoes.

Chili takes a while to prepare. But you can make it when you have some cooking time, then stash it in the freezer. Because, as good as it tastes when freshly made, it’s even better reheated. So you can use it for quick weeknight dinners or as tailgate fare for watching the big game. It’s even special enough to serve to good friends at a casual weekend dinner party.

And once they taste your Chunky Pork and Sweet Potato Chili, they’ll become even better friends. 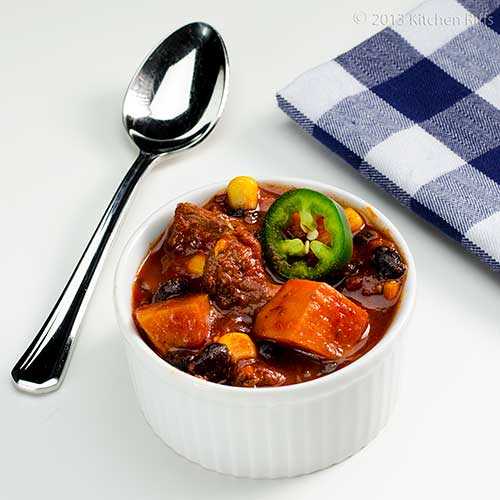 Some cooks say chili should never contain beans, while others wouldn’t make it without. I’ll eat it either way myself, but I do think beans make a fine addition to almost any chili. I’m using black beans in this recipe, but you could substitute kidney beans, pintos, or whatever strikes your fancy. I will say, however, that the combo of black beans, pork, and sweet potatoes is, well, sweet.

The major flavor in this chili comes from dried, powdered red chilies—i.e., chile powder. This differs from chili powder, which is a mix of chile powder, plus cumin, coriander, and other flavorings. I discussed this in more detail in our post on Chili Basics. See Notes below for a discussion of chile powder possibilities for this recipe.

Prep time for this recipe will vary depending on how quickly you work. The most time-consuming process is cutting up the pork and browning it (you can save time if you buy the meat already cubed). Figure on a good 20 minutes for cutting up the meat, and at least another 20 for browning it. While you’re browning, you can do much of the other work, so total prep should take you under an hour. Cooking time adds another couple of hours. BTW, you can cut up and brown the meat a day ahead, then proceed with the recipe the following day.

This recipe yields a lot—at least 4 quarts, and probably more like 5. So it will feed a crowd. Leftovers freeze well in airtight containers. 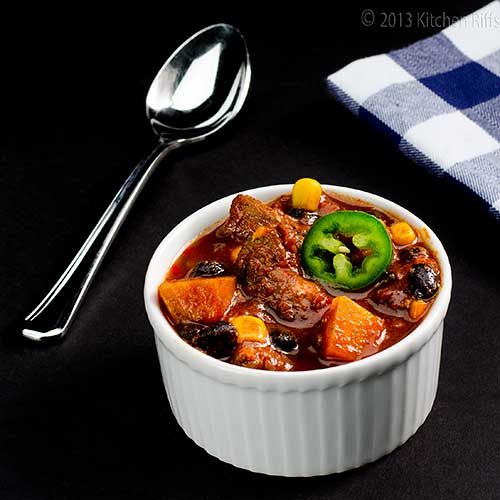 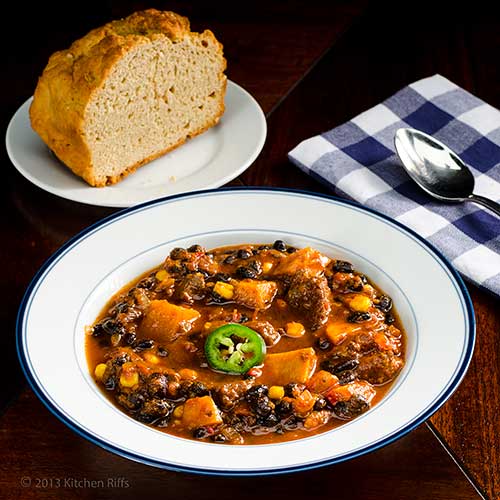 Seize the Day (and Your Spoon)

“Wow!” said Mrs. Kitchen Riffs. “This chili has a terrific combination of flavors!”

“Agreed,” I said. “In the past, we’ve done pork chili and we’ve done sweet potato chili. But I never thought to combine the flavors before.”

“Me too,” I said. “And I’m loving this Beer Bread—it goes really well with chili.”

“Yes,” said Mrs K R, “but we should make some cornbread with our next batch of chili. That’s a dynamite pairing.”

“Funny you should mention that,” I said. “Later this week, I’ll be posting a recipe for Skillet Jalapeño Cornbread—it’s terrific with almost any chili.”

“Count me in for that,” said Mrs K R. “And I hope you’ll be doing another chili recipe, too.”

“Yup,” I said. “Coming up in about a week we’ll be doing Pulled Pork Green Chile Chili.”

“Sounds intriguing,” said Mrs K R, pushing her empty bowl across the table towards me. “But while we’re waiting, let’s enjoy another bowl of this Chunky Pork and Sweet Potato Chili.”

I ladled us up another round. When it comes to chili season, it’s all about carpe diem.