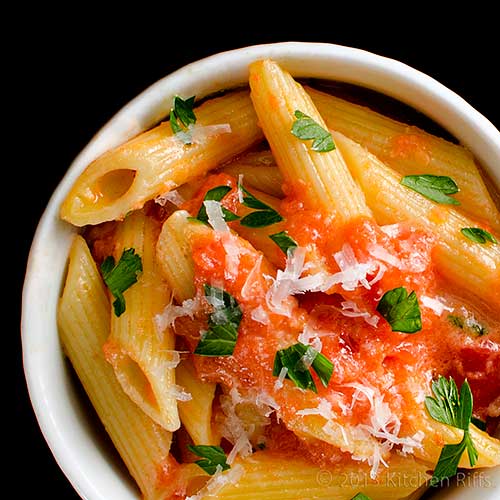 Back in the day, Penne alla Vodka was the “It” dish at the sort of Italian restaurant where they helped you with your napkin. You know the kind I mean—just a little bit snootier than necessary.

Penne (or Pasta) alla Vodka became so popular that it soon moved to the more down-market trattoria, where it was a menu staple for years. Then it seemed to disappear.

Well, good news! Lately I’ve spotted it again on some restaurant menus. And I even ordered it (for the first time in probably 20 years). I had forgotten how great this dish could be—so of course I’ve been inspired to make it at home again. It’s not clear where this dish originated—though Wikipedia offers a nice summary of various theories. I do know from firsthand experience that it became wildly popular in the 80s. (Yes, I’m ancient.)

Penne (preferably with ridges) has long been synonymous with this dish, but you can use whatever pasta shape you prefer. Do select one with a somewhat rough surface (to catch the flavorful sauce).

I used to make this dish years ago, but have forgotten (and seem to have lost) whatever recipe I used. Fortunately, most of the recipes are pretty similar. I adapted the one in this post from Lydia Bastianich’s Lidia's Italian-American Kitchen. Her version includes garlic (though many don’t, and the original recipe probably didn’t). I like garlic, so I approve. And now that this recipe is on the blog, I’ll never lose it again!

Prep time for this dish is just a few minutes, and cooking the sauce takes about 10 to 15 minutes. The pasta can cook at the same time the sauce is simmering. So figure half an hour max from the time you put the pasta water on to boil to the time you’re sitting down to dinner. Maybe a bit more if you want to cook the sauce longer.

This dish serves 4 to 6, and leftovers keep in the refrigerator for a few days if stored in an airtight container.

When making this dish for just Mrs. Kitchen Riffs and myself, I often cook up only half a batch of pasta and freeze half the sauce (which keeps well in the freezer for several months). 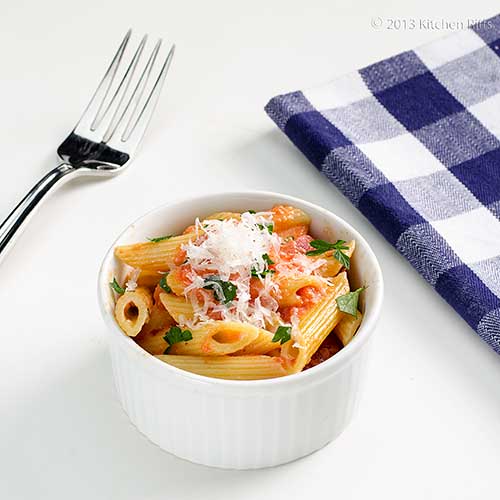 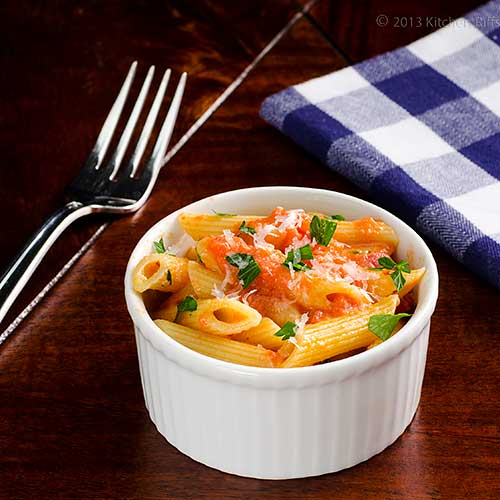 Pasta Lovers on a Roll

“Wow, this dish is a stroll down memory lane,” I said, forking a bite of Penne alla Vodka

“Yeah, good times,” said Mrs. Kitchen Riffs. “So I’m adding this link to another great treat from the 1980s, for readers who might be feeling nostalgic.”  [And for those who find it confusing, Wikipedia is your friend.]

“Oh, just something I had to include,” said Mrs K R. “Cause I’m never gonna let you down.”

“This pasta is sooo delish,” she said. “You’re a wonderful cook. I wouldn’t get this from any other guy.”

“Well, gosh,” I said. “But maybe I should check that link to make sure it’s correct.”

Yeah, true. No need to worry.

You may also enjoy reading about:
Fettuccine Alfredo
Pesto Pasta
Pasta Puttanesca
Pasta with Tomato and Bacon Sauce
Pasta Cacio e Pepe
Pasta with Shrimp and Fennel
Pasta alla Norma
Pasta with Sardines and Fennel
Or check out the index for more
Posted by Kitchen Riffs at 9:15 AM