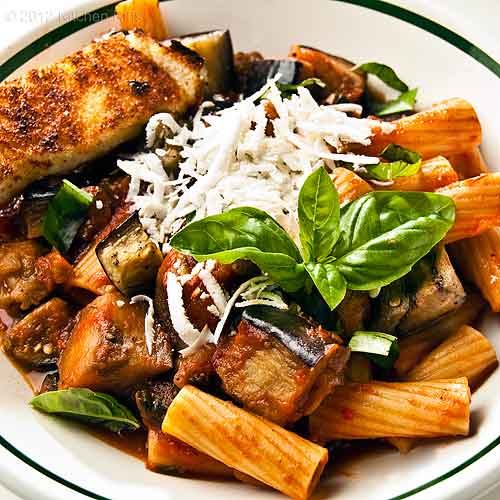 Pasta alla Norma showcases the deep flavor of eggplant, combining it in a spicy tomato sauce with basil and ricotta salata to create one of Sicily’s most famous pasta dishes.

But actually, it’s enjoyed all over Italy. Indeed, it’s almost a cultural institution, having been named (reportedly, at least) in honor of Vincenzo Bellini’s opera Norma. Bellini was a native of Sicily and is considered one of its finest composers — and Norma is his best-loved opera. So naming a pasta dish after it was high praise indeed.

Unfortunately, Pasta alla Norma isn’t well known in the US. I sometimes see it on restaurant menus, but not often. Which is too bad, because it’s an exceptionally tasty dish. Fortunately, it’s also simple to prepare, and once you taste it, you’ll want to make it often.

Pasta alla Norma combines all its ingredients to create a beautiful harmony — just like Bellini’s opera. 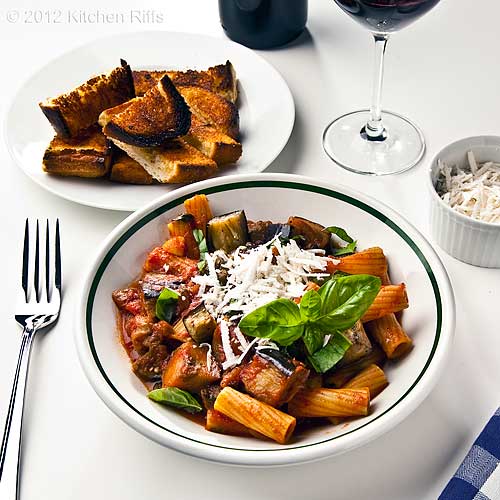 This recipe has 3 distinct — but easy — steps. First, you need to prepare your eggplant. Traditionally this is done by frying or sautéing, but I prefer to use Roast Eggplant, which is lighter and tastier. Second, you need to make a tasty tomato sauce. I provide instructions, but if you have a favorite homemade tomato sauce, you can substitute that. Third, you need to combine the eggplant and tomato sauce, and then add freshly cooked pasta. Toss it all together, and serve (adding ricotta salata at table).

Most recipes for this dish are pretty similar, though you’ll see a few differences. My favorite discussion of the dish can be found in Bugialli on Pasta (I have the original version of this book, not the revised one), where Bugialli details three different recipes for Pasta alla Norma.

This recipe serves 4. You can easily double it if necessary. Leftovers keep well in an airtight container in the refrigerator for several days. Prep time for this recipe is about 20 minutes, and cooking time is 30 to 40 minutes total. 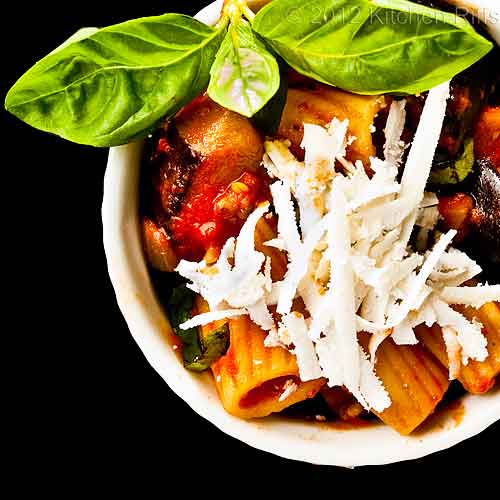 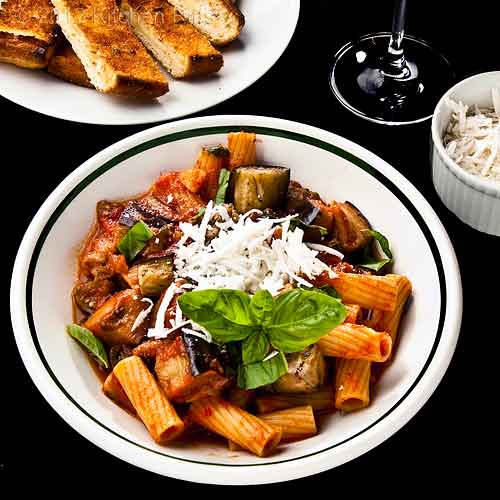 Exactly how Pasta alla Norma got its name is unclear; there are several competing stories.  The one I favor says that Nino Martoglio — a Sicilian writer, publisher, journalist, and theater producer — was so impressed by the dish that he compared it to Bellini’s operatic masterpiece, Norma. True or not? Who knows? It’s a good story, though.

As it happens, Mrs. Kitchen Riffs is a self-described “operaholic.” So I’m turning to her to finish this post, and tell us about Bellini’s opera:

Norma premiered at La Scala opera house in Milan in December 1831, and was an immediate hit. It’s a perfect example of the operatic style called bel canto (Italian for “beautiful singing”) and it features one of opera’s most storied arias, “Casta diva.” Many of the world’s best-known sopranos have braved the title role. In the mid-20th century, it was a favorite vehicle of Maria Callas.

Norma is a gorgeous potboiler, with all the elements that opera fans find irresistible: love, betrayal, violent death, and blood-curdling high notes. Here’s the storyline: Norma is a druid high priestess in Gaul at the time of the Roman occupation, circa 50 BCE. Though sworn to fight the Roman invaders, Norma has secretly been engaged in a love affair with Pollione, the Roman proconsul. She has borne him two children, whom she is raising at a hidden forest location. But now Pollione has fallen for Adalgisa, a young trophy temple virgin.

The clueless Adalgisa innocently confesses her love of Pollione to Norma — who goes ballistic as only a druid priestess can. She first vows to kill her children, Medea-style, but can’t bring herself to carry out the deed. Instead, she strikes the Druids’ sacred bronze shield, summoning them to war, shouting “vendetta . . . sangue!” (“vengeance . . . blood!”)

When the hordes arrive, she tells them that a priestess has violated her sacred vows and must die. Pollione assumes she means Adalgisa, and tries to stop her from speaking further. But then Norma dramatically announces that she herself is the transgressor, and orders a funeral pyre to be lighted. At last, Pollione recognizes Norma’s nobility. Remorseful, he vows to die with her, and the two mount the pyre together as the music swells to a thrilling crescendo.

At this point, 19th century opera goers might have been shrieking in grief, rending their garments, throwing bouquets, and shouting “brava . . . bellisima!” Nowadays, we just stand up and applaud politely. I like the old way better myself.

Posted by Kitchen Riffs at 9:04 AM