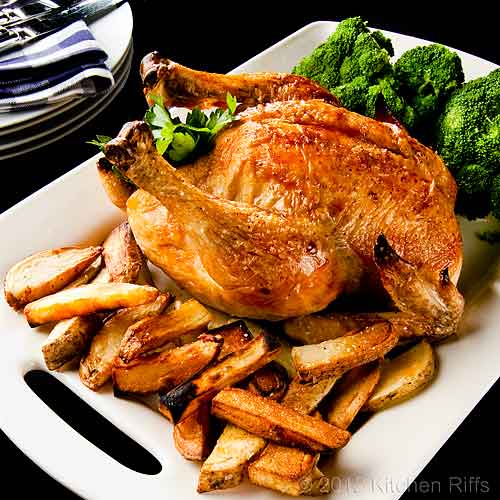 The High-Heat Method Produces Succulent Chicken with a Crispy Skin

Few dishes are better than a perfectly roasted chicken.  With its crisp, browned skin and juicy, succulent flesh, it’s so simple — yet irresistible.

Well, relax.  There’s a way to eliminate most of those worries:  Just use the high-heat method.  It’s the easiest, fastest way to roast a chicken, and it’s practically foolproof.

The result?  Superb flavor and nicely browned skin.  And a chicken that tastes way better than those supermarket rotisserie birds. 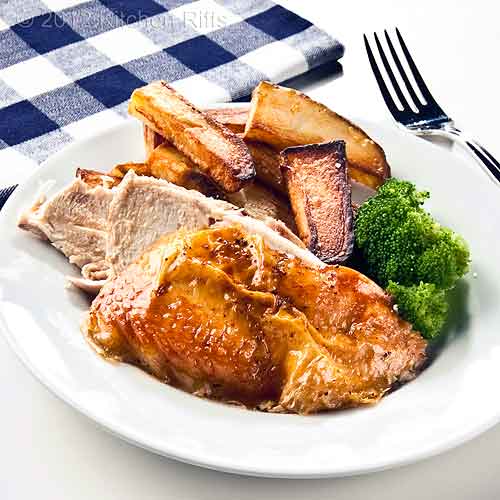 I first read about the high-heat method of roasting poultry in John and Karen Hess’s 1977 book, The Taste of America — which wasn’t a cookbook, but did include a high-heat recipe for roasting turkey. I tried it and found that it produced a perfectly cooked 12-pound bird in 2 hours. I’ve roasted whole poultry that way ever since.

My recipe is a combination of Hess’s and Kafka’s, and it’s as streamlined as any you’ll find: There’s no trussing the chicken, no massaging with olive oil or butter, no stuffing, and no basting. Preparation time is 5 to 10 minutes, plus a half hour to let the chicken lose its refrigerator chill at room temperature. Roasting time is an hour or less, depending on how large a bird you’re roasting (I recommend nothing larger than 5 pounds or so; you’ll get a better result with a bird about 3½ to 4 pounds).

A larger chicken will yield 4 generous servings; a smaller one, 2 to 3. Well-wrapped leftovers keep a few days in the refrigerator. 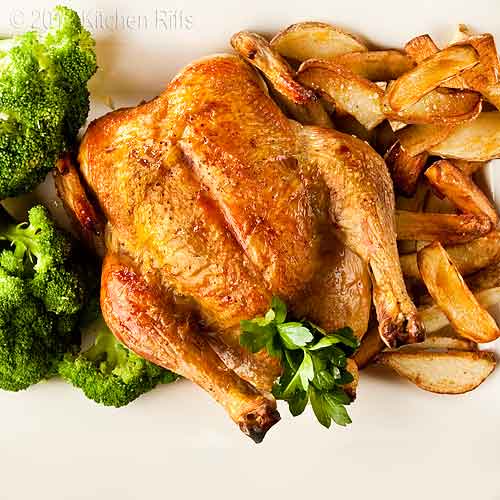 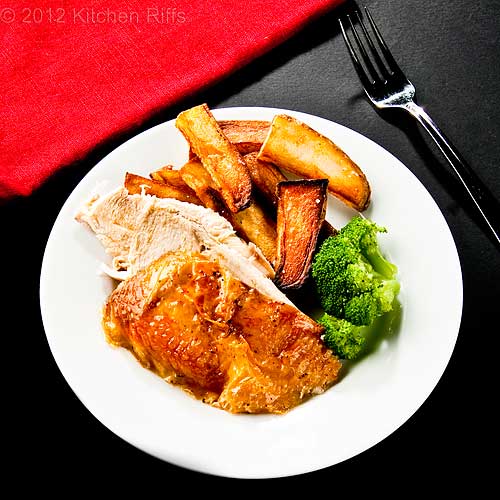 Roast a Chicken to Practice for Your Thanksgiving Turkey

And if you’re intimidated about roasting a turkey, you’re in luck:  The method for roasting turkey at high heat is the same as for chicken, with just a few adjustments needed because turkeys tend to be larger.  Here are the turkey specifics:  Prepare the turkey just as you would a chicken.  Then leave it out at room temperature for at least an hour before placing it in the oven so it warms properly.  Put the turkey in the oven legs first.  Run a spatula under the turkey after 20 minutes so that its skin doesn’t stick to the pan (Step 9), but don’t turn the oven temperature down to 450 until you’ve been roasting the turkey for 30 or 40 minutes (I wait until the turkey is nicely browned).

Using this method, my current oven roasts a 12-pound turkey in about an hour and 45 minutes.  But I’ve had ovens that roasted them in as little as an hour and a half, or as long as 2 hours.  So I always start testing for doneness (by taking the bird’s temperature — Step 10) at the hour-and-a-half mark.  A 15-pound turkey takes 2 hours or so (or maybe another 15 minutes, max).  I don’t like roasting really big turkeys for the same reason I don’t like roasting really big chickens.  If I need more turkey than a 15 pounder provides, I’ll roast two 10 pounders.

So this post on Roast Chicken is basically a twofer.  With the chicken, you’ve got your Sunday dinner covered.  And by following essentially the same recipe and extending the roasting time, you’re good to go with your Thanksgiving turkey, too.  Bon appétit!