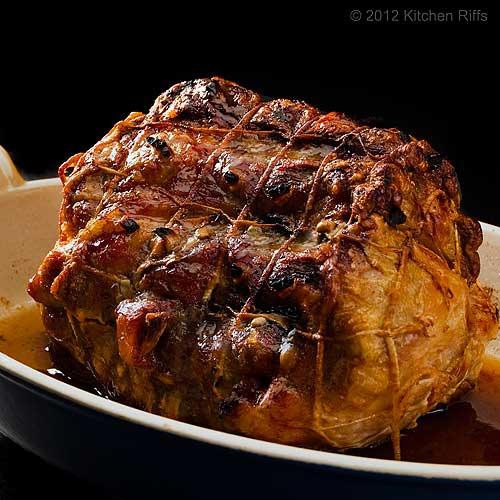 The Trick to a Perfectly Cooked, Juicy Pork Roast

Pork is trendy.  Pork cuts of all descriptions have become favorite menu items at chichi restaurants in recent years.  And no wonder.  It’s a tasty meat that combines beautifully with many side dishes.

Roast Pork is one of the first things I think of when I’m cooking for company or preparing a festive dinner.  And I’ve found an easy way to make sure that it turns out perfectly. 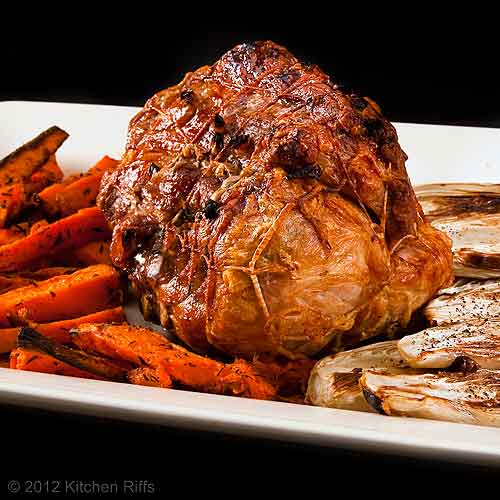 The Trick? Use an Instant Read Thermometer!

Most recipes — including mine — state an approximate time for cooking Roast Pork. But the only true way to know when the meat is done is to measure its internal temperature. Instant read thermometers are reasonably accurate, easy to use, and inexpensive. (Well, inexpensive unless you spring for a Thermapen. Those are pricey — though well worth it in my opinion.) Using an instant read thermometer is the easiest, most accurate way to determine if your pork is cooked to the proper temperature (i.e., “done”).

When pork is cooked to the proper temperature, it will be juicy — and sometimes pink. It’s the pink part that throws people off. We’re so conditioned to fear pathogens like trichinosis that most of us overcook pork. Even when we use a thermometer, the long-standing rule of thumb was always to cook it until it reached at least 160 degrees Fahrenheit. And at that temperature, most pork is dry.

Well, good news! The old rule that you should cook pork to 160° F? Gone! As of May, 2011 the USDA now recommends cooking whole cuts of pork to 145° F, rather than the 160° it previously recommended. “Whole cuts” include steaks, roasts, and chops. Their guideline for cooking ground pork (and ground beef, veal, or lamb, for that matter) remains at 160°. USDA also recommends letting pork rest for 3 minutes after removing from the oven and before “cutting or consuming.” But you want to do that anyway — it carves better.

USDA also specifically addresses the question of whether pink pork is “safe.” Here’s what they say:


Historically, consumers have viewed the color pink in pork to be a sign of undercooked meat. If raw pork is cooked to 145 °F and allowed to rest for three minutes, it may still be pink but is safe to eat. The pink color can be due to the cooking method, added ingredients, or other factors. As always, cured pork (e.g., cured ham and cured pork chops) will remain pink after cooking.

So if you want pork roast that’s juicy and delicious, use a thermometer. When it reads 145° F, your Roast Pork is done. 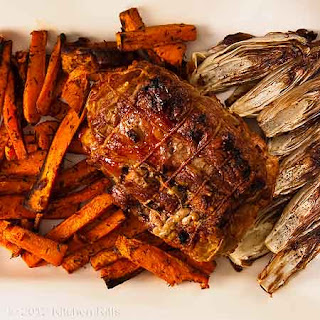 There are several cuts of pork that are suitable for roasting.  The boneless loin or the more expensive tenderloin both work well.  Almost as popular, and to my palate more flavorful, is blade roast (Boston Butt).   Most supermarkets sell these already boned, rolled, and tied.  If they don’t, any butcher can do it for you.

What oven temperature should you use?  Most recipes specify moderate heat (350°).  But there are also many recipes that call for low heat (250°) or high heat (500°). Barbara Kafka in Roasting makes an elegant case for the high-heat method, and my recipe is adapted from hers. In the Notes, I have a suggestion for moderate-heat cooking times.

This recipe serves 6 - 8. Well-wrapped leftovers can be kept in the refrigerator for several days. Preparation time is 5 - 10 minutes, cooking time an hour to an hour and a quarter. 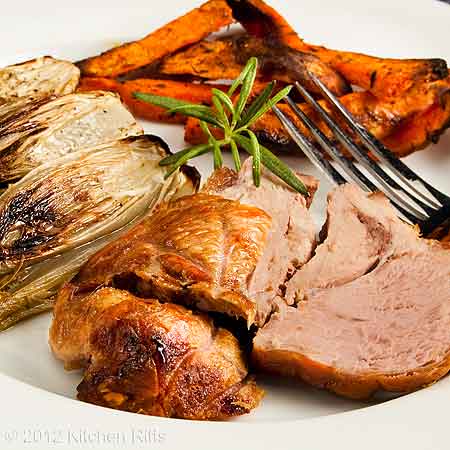 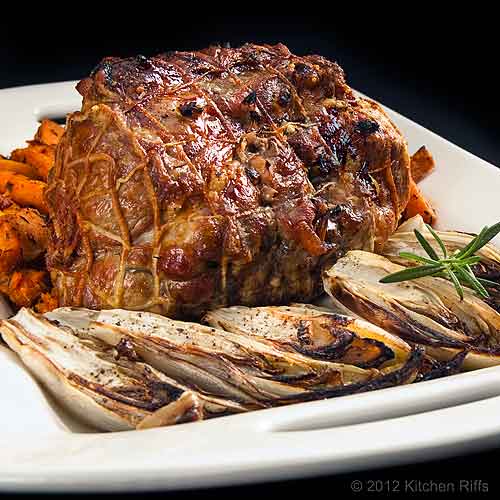 So Juicy You Don’t Need Gravy

Although I include instructions for making a quick pan gravy, pork cooked this way is so flavorful it really doesn’t need a sauce accompaniment.  Still, gravy tastes awfully good, so why not?  It takes only a few minutes to make and adds an interesting dimension to the meal.

Besides, it’ll please you and your diners.  And isn’t that what cooking is all about?

Your pictures always make me want to lick my screen. Though I don't often cook pork as I never grew up with it this makes me want to give it a try.

Hi Abbe, licking your screen is encouraged! I always end up licking my plate . . . I don't cook pork often enough, either, and when I do I always wonder why. Thanks for commenting.

Eating Local in the Lou said...

What a terrific blog! So glad I stumbled upon it! If you get a chance, I would love it if you would check out mine: http://eatinglocalinthelou.blogspot.com
From a fellow St. Louisan :)

Simple roast pork ... so simple, yet so, so, so delicious! Thanks for the tips!

@Eating Local, thanks for the kinds words (and the comment!). I'll definitely check out your blog.

@Kimberly, I know, simple but awfully good! Sometimes simple is best. Thanks for the comment.

Thanks for the tips. I am glad we do not have to wait until the most conservative person in the group thinks that your roast is done as it looks perfectly cooked with those yummy crispy bits on the outside and yet juicy on the inside. Love pork fat crackle. Take Care, BAM

Never made roast pork at home. This looks so beautiful and flavorful. Love it!!!

Hi Asmita, it's delicious and well worth making sometime. And as you say, it looks great! Thanks for commenting.

Holy moly, that is one beautiful roast. And it's not easy to make meat look good in a photo. Nicely done!

Hi Carolyn, thanks for your kind words! This was a fun shoot, although it took me some time to get the light right so it'd show off the roast to best advantage. Thanks for taking time to comment.

So 145F it is! I learn something new every day. By the way, that pork roast looks divine!!!!!So moist, juicy and definitely flavorful! Bravo. Now can I get a plate?

That is one beautiful roast pork. I had a company over for dinner this past Sunday and I made roast beef. It turned out good but not as looking nice as yours.
I like the high temp. roasting as well for a certain type of cut. It think it sears the outside surface so the juice can stay inside to keep the meat moist.
Good to know the recommended meat temperature change. I only wish I can afford the Themapen. I used to use one of those cheap meat thermometer before but didn't think it was that accurate. These days I just rely on my gut feeling; sometimes it works, and of course, sometimes it doesn't. :)

@Simply Tia, of course you can have a plate! And the 145 degree trick really works. Thanks for the kind words.

@beyondkimchee, I was lucky with how nicely that pork roast turned out. The Thermapen is great - accurate to within a degree, and reads the temperature in a second or two. I got mine as a gift - I'd never pay that money for something like a thermometer, although for what it does I think it's priced fairly.

Great guidance, the roast looks terrific! The only thing missing is the roast pork sandwich for lunch the next day...

Hi Amy, "Great guidance" is a terrific term! Hadn't heard that before. Thanks for your kind words, and for taking time to comment.

Your pork roast looks perfect! I love a good pork roast, but they are hard to make without drying them out. Your discussion on how to cook a pork roast is very, very helpful! I just read a few days ago the thing about the approved temperature dropping from 160 to 145. I can't wait to try it because my pork is always too dry. Thanks for all of your notes and information!

Hi mjskit, I've suffered the "too dry" pork roast syndrome more than I care to admit - watching the temperature and taking it out of the oven before it's too well done always works, though. Thanks for your kind words, and the comment.

How fantastic is that roast. The color is amazing. Thanks for the thermometer tip. We have several cheap ones and they never seem to be accurate. I'm going to splurge for a good one.

Hi Mother Rimmy, I have several cheap thermometers too, and they work "OK" - but just OK. The Thermapen is great. It's a luxury item for most of us, but it's a fabulous thermometer. I like it so much I'm thinking about doing a post on it. Anyway, thanks for the compliment, and the comment.

What an elegant dish for entertaining. I bet it is unbelievably delicious! We ate a lot of pork - including roasts like this - growing up, so this really brings me back. But yours looks perfect. Pork can dry out when overcooked and it seems like you've come up with a fail proof and simple method!

Hi Katherine, this is a great dish for entertaining - very flavorful, and so easy to prepare. I agree about the pork drying out - and I've had no problems with this when I've cooked it to 145 degrees or so. Easy! Thanks for taking time to comment.

This too is a gorgeous roast, beautifully captured and I bet it tasted fantastic! :)

Hi Sarah, not only was the roast great to look at, it tasted great too! Thanks for your comment.

After a life-time of eating dry pork, I was very glad to read about the changing guidelines, although, honestly, I'd quit cooking my roasts to well-done a number of years ago. One of the televised chefs remarked that there hadn't been a case of trichinosis reported in the US in 30 years. That was good enough for me and from then on I cooked them until the pink was just gone. Now, though, its 145 - 150˚ and no more. And, as you know, the results is one very moist and flavorful roast. Your roast here, served with the roasted endive, looks like it was prepared perfectly, John. That must've been one great dinner.

Hi John, I had started cooking it to 145F or so before the guidelines came out, too, but I was really glad to see them. So many cooks that I trusted said 145 degrees was enough, although you always have that nagging wonder in the back of the head, wondering if you're doing something really stupid. No worries now! It really was a great dinner. Thanks for the comment.

Elegant, exquisite and magnificent roast pork. I did not know about the 145 degrees. I learn so much from your blog :)

Hi Judy, that 145 degree thing is kind of neat - really helps me cook a juicy roast. Thanks for the comment.