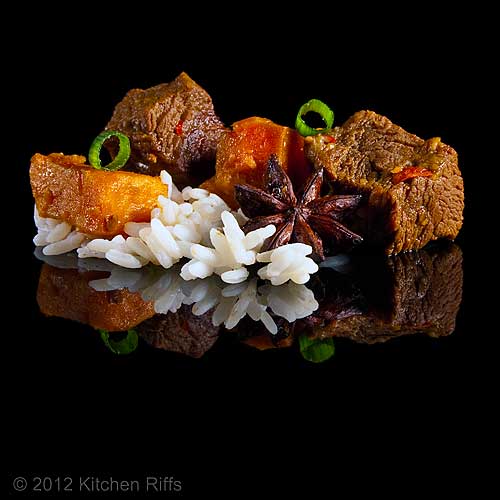 This Chinese Classic Is Easier to Make than Beef Stew

Red-braising, also called red-cooking — or in Chinese, hong shoo — is a common cooking method throughout much of China.  It’s similar to a western-style braise, but much quicker because the meat isn’t browned first.  And for most people it’s easier to master than stir fry (the best-known Chinese cooking technique).

A bit of chopping, a quick sauté of an ingredient or two, then add liquid and braise on the back of the stove or in the oven until done.  It’s a dish that practically cooks itself.

And the flavor?  Exquisite. 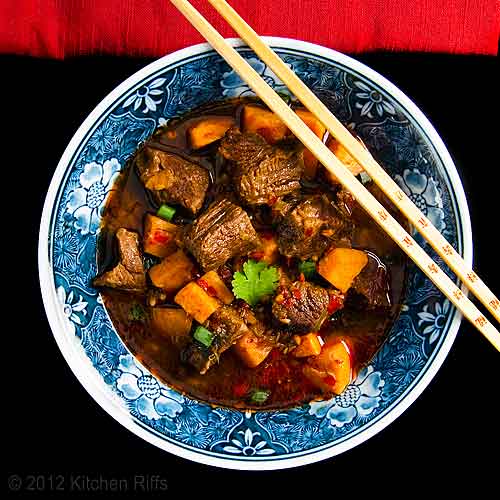 You can red-braise almost anything, but the technique is particularly well-suited to tough cuts of meat that benefit from long, slow cooking in a flavorful liquid.

It’s called red-braising because some components of the braising liquid have a reddish hue that slightly colors whatever is being cooked.  The coloring agents are dark soy sauce and caramelized sugar, both of which appear prominently in most recipes for red-braising.  But when it comes to cooking beef — particularly in the provinces of Hunan and Sichuan — chili bean paste (a specialty of Sichuan) is usually substituted for the sugar.

As far as I know, sweet potatoes aren’t typically used as an ingredient when red-cooking beef in China.  At least I’ve never seen a recipe that includes them.  But their sweet succulent flavor perfectly complements the spiciness of the braising liquid, so I think they’re a natural.

There are loads of recipes in books and on the web for Red-Braised Beef, and most are fairly similar.  I particularly enjoy Fuchia Dunlop’s discussion of Red-Braised Beef in both Land of Plenty and Revolutionary Chinese Cookbook. My recipe is adapted from hers.

A 3-quart Dutch oven is the perfect cooking utensil for this recipe.  If you don’t have one, use any casserole that’s stovetop- and oven-friendly.  This recipe does require a few specialty ingredients, as discussed below.  Active prep time is about 25 minutes; cooking time (largely unattended) is about 2 hours.  This recipe will serve 6 to 8.

You can braise the beef either in the oven or on top of the stove.  Instructions are provided for both methods. 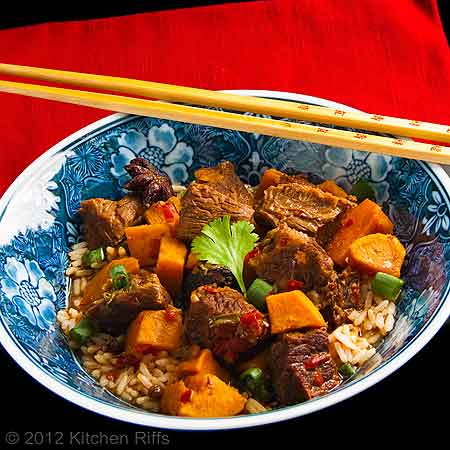 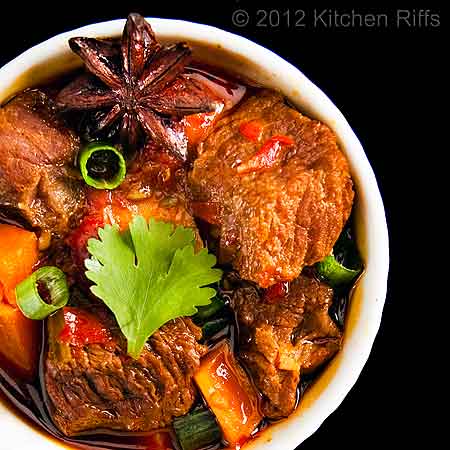 Delicious Any Which Way

Red-Braised Beef works well as the centerpiece for a Chinese meal.  While it’s cooking in the oven, you can use the stovetop to stir-fry a couple of accompanying vegetable dishes.

Or you can serve it “Western” style.  Fuchia Dunlop suggests there’s no need to serve Red-Braised Beef with rice – it’s equally good served over a bed of mashed potatoes.  I haven’t tried this, but it sounds wonderful.

This dish is really nothing more than beef stew — just made with some ingredients that many of us don’t often use.  But those ingredients happen to be delicious.

“You should use them more often,” said Mrs. Kitchen Riffs, as she cleaned her plate.  “I’m going to have another helping.”

“Is that your third?”

“No, second.  After all, I can’t have thirds until I have seconds.”

I love that woman!

The hubby and I love authentic Chinese food, but it's something we just never cook at home ... but I think this recipe may change that!

Hi Kimberly, it's totally wonderful. I don't cook Chinese at home as much as I should - I don't really have as much of an intuitive feel for putting together flavors in this cuisine as I'd like to have - but when I do I'm so glad. Thanks for commenting.

As soon as I saw beef and sweet potatoes I was sold! I wasn't familiar with red braising but I love that it cuts out a step or two from traditional stews. This sounds like an incredible combination of flavors!

As soon as I saw beef and sweet potatoes I was sold! I wasn't familiar with red braising but I love that it cuts out a step or two from traditional stews. This sounds like an incredible combination of flavors!

@Katherine, the flavor is wonderful. It's really one of those dishes where you want to stick your face in your plate. Inelegant, but so good you wouldn't care!

@Sandy, thanks! The sweet potato is a great addition. It's not traditional, but the flavor just works.

@both, thanks so much for commenting.

Red braising - who knew? My daughter-in-law is Chinese and she might use this method but I've never heard her call it that. Looks wonderful and I love the inclusion of sweet potato.

I gave up red meat for Lent, but this is on the must make list the Monday after Easter. I've never heard of this preparation, but love the ease of it. Looks amazing.

This sounds wonderful with the sweet potatoes. The photos are superb too!!!

@Maureen, I know, it's not as widely known as stir fry. But totally addictive.

@Denise, well worth waiting for until after Lent. Although I have some thoughts on a vegan red-braised dish that I think would be spectacular; maybe I should get busy and make it!

@Asmita, this is a great dish without the sweet potatoes (the traditional way to make it; just don't add them to the recipe), but I think they add a lot.

@all, thanks for the kind words, and for taking time to comment.

Gorgeous photo! It should be in a cookbook. I love red-cooking, too, for its sweet-salty-umami goodness.

Hi Carolyn, red-cooking is wonderful, isn't it? You've perfectly described its essence. Thanks for the kind words, and the comment.

I love this. I have eaten similar kind Chinese style braised beef before and I loved it. Of course I didn't really know what's in it, but thanks to your recipe and explanation, now I understand. Great post, as always.
BTW, are you Chinese?

@Jsy, thanks! It was a fun post to write. Thanks for stopping by.

@beyondkimchee, it was actually seeing similar dishes on Chinese restaurant menus that led me to explore how to make this. I'm not Chinese - just an enthusiastic eater and cook. Thanks for the compliment and your comment.

Hi Biana, it's a truly great combo. Totally tasty. Thanks for stopping by.

This photo is so beautiful it should be in a book. WOW! The recipe sounds good too but the photo - STUNNING!

Hi Vicki, this was a fun recipe to photograph. Trust me, this dish tastes far better than the photos look. But thanks for the compliment and the comment.

Hi Lannie, it is yummy! ;-) Thanks for your kind words and for taking time to comment.

wow your red braised beef looks absolutely stunning! I serve this kind of braised spicy beef stew quite often and I never get tire of it.
How is the Lee Kum Kee bean paste? I've only used the Sichuan "pixian" bean paste since that's what my parents have always been using.
Great shots on this classic beef dish!

Hi Yi, it's a great dish, isn't it? I've not used the Pixian brand so I can't compare it to the Lee Kum Kee brand. What I like about the LKK brand is it has great depth of flavor with a wonderful aftertaste. It's definitely spicy but not hot - just a nice balance of flavor. But I need to try more brands, because not every store carries it. Thanks for your kind words, and your comment.

I don't see any instruction on what to do with the ginger rounds and scallions after they are sliced..

Hi Anonymous, great catch! Weird, I just went and checked the manuscript and it's there — somehow it didn't make it into the post. At any rate you add both of these in Step 7. I'll update the post. Thanks so much for taking time to point this out!