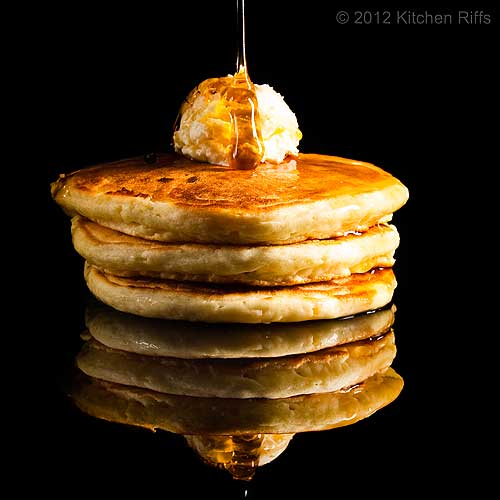 Great for Shrove Tuesday, or Any Time

Next week is Shrove Tuesday – the day before Ash Wednesday, which marks the beginning of Lent. It’s also known as Mardi Gras, which is French for “Fat Tuesday.”

Traditionally,it’s the day when families use up all the fat, sugar, and other rich foods in their larders in preparation for the Lenten fast (hence, “Fat Tuesday”).  Some cultures turn all that richness into doughnuts.  But when I was growing up, pancakes were the Shrove Tuesday feast food of choice.

Although I rarely eat pancakes for breakfast (too much food too early in the day), they’re fine dinner fare.  And with this recipe, you can walk through the front door and be sitting down to pancakes in about 20 minutes.  Best of all, they’re made with ingredients you probably have on hand already.

So now you know what you’ll be serving for dinner next Tuesday. 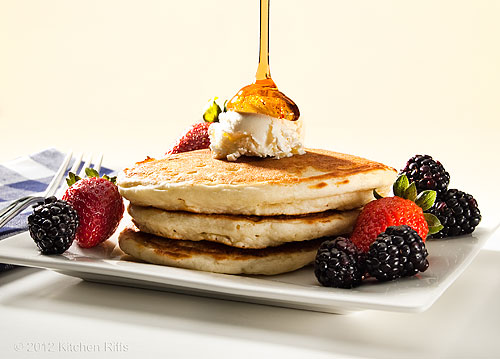 Wikipedia’s pancake page says there’s archaeological evidence that pancakes were “probably the earliest and most widespread [type] of cereal food eaten in prehistoric societies.” So mankind has had plenty of time to perfect the dish. Which is why recipes in most standard cookbooks are virtually identical — including this one, which is slightly adapted from James Beard’s American Cookery.

Oh, there are pancake variations that use different flours (buckwheat, for example) or add fruit (blueberries are my favorite).  Some recipes fine tune the procedure (arguably, the absolute best pancakes require separating the eggs, beating the whites separately, and then folding them into the mixture right before you griddle the cakes).

But we’re not discussing any of that today, because I want to show you the easiest and quickest way of making pancakes from scratch.  In the Notes we’ll have a word or two about adding fruit to your pancakes, but that’s as fancy as this discussion will get.

This recipe yields about a dozen large (6”) pancakes.  Mixing time takes 5 - 7 minutes, cooking time another 10 - 15 minutes.  A nonstick electric griddle or skillet is perfect for cooking.  If you don’t have one of these, an ordinary griddle or skillet works too.  Leftovers keep for a day or two in the refrigerator, but they’re not quite as delectable on the second day. 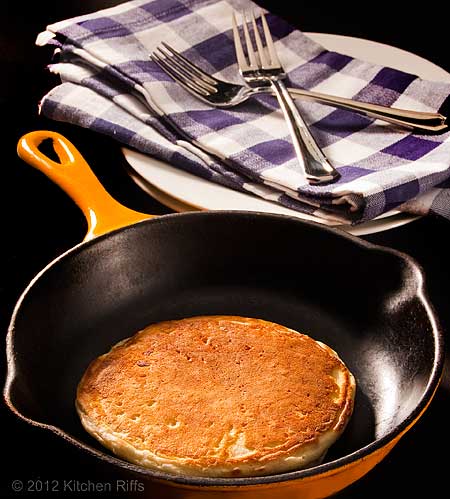 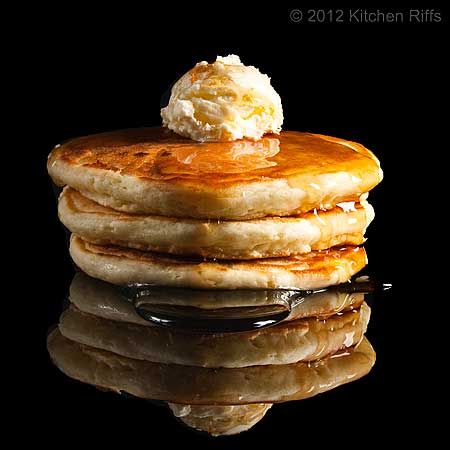 Shrove Tuesday is also International Pancake Day. And flapjack fanatics celebrate it with pancake races (a sporting event that started in England centuries ago — at least as far back as 1445).

What’s a pancake race, you ask? Well, in its modern form the contestants (traditionally women) run along a course, flipping pancakes in frying pans. Since 1950, the Kansas town of Liberal and the English town of Olney have been formally competing in dueling pancake races on International Pancake Day. Participants run along a measured course in each town, and their times are compared. Going into this year’s race, Liberal is the overall leader with 36 wins to Olney’s 25.

“What a great idea!” I exclaimed to Mrs. Kitchen Riffs when I read about the epic Liberal/Olney competition. “We should get into the spirit of this thing. We’ll cook up a bunch of pancakes and hold our own friendly little competition. And we can drink Sazeracs! After all, what other cocktail could be more appropriate at this time of the year?”

“So you’re saying you still like to play with your food?” asked Mrs K R.

Well, when you put it that way, I guess not.

But I’m still going to have a Sazerac.

I love pancakes ... breakfast, lunch, dinner ... I can eat them anytime!

These photos are beautiful! Have you even done a post on how you capture such great images with food? I'm sure there are a number of bloggers who would love to read it!

Who doesn't love pancakes?! These look amazing and I love the idea of having them for dinner - why don't I ever do that? I also enjoyed the bit of pancake history. Who knew they were so ancient? Great post and photos, thanks!

Hi Katherine, good question - who indeed doesn't love pancakes?! I like the whole dinner-for-breakfast idea, so pancakes fit right into that, IMO. Thanks for your kind words, and for taking time to comment.

I can eat pancakes anytime, I love them that much.

Hi Cookinglady, pancakes really have a great appeal, don't they? One of my favorite foods when I was a kid, and still like them a lot. Thanks for your comment.

Hi Jay, these are great to eat - real comfort food. Thanks for commenting.

We have a family joke in my house - mom can't make pancakes. I burn them every time, or they come out too gooey and heavy. I'll give your recipe a try and see if I can't improve my reputation.

Hi Mother Rimmy, hope these work for you! Burning sounds like your griddle might be a bit too hot (or you're not turning them soon enough). Gooey & heavy sounds like you're not cooking them enough! Or maybe your batter is too thick. Good luck with your next batch, and thanks for taking time to comment.

I'm with you about pancakes for breakfast, but I love them for the occasional dinner. And only with maple syrup (100%)! We'll probably be eating our pancakes next Tuesday at the church.

@Beth, maple syrup is the only way to go.

@both, thanks for commenting!

what beautiful photos! the black background makes all the food items really pop, very atmospheric and moody. love it.

Hi Lannie, I like the classic white backgrounds too, but I agree black backgrounds really can showcase the food. Thanks for your some very nice words, and for taking time to comment.

Wow the black background is a stunning backdrop to those pancakes. Your photography is beautiful. You are making me hungry. Time to start the griddle.

Hi Bam's Kitchen, pancakes are always good, so I'm delighted I inspired you to get your griddle going. Thanks for the compliment, and the comment.

We love pancakes and making it at home is such a great idea. Great at breakfast, lunch or dinner. Love the photographs!!!

Hi Asmita, pancakes are sooo good, aren't they?! I love them. Thanks for the compliment, and for stopping by.

I, too, sometimes serve pancakes for "breakfast for dinner night" in my house. Yes, serve with pure Vermont maple syrup of course. Can't beat that. I cook mine over cast iron skillet since I don't have the electric griddle.
If I am in the mood, I chop some banana and add to the batter.
BTW how did you take the mirror image shot with black background? Simply amazing!

Hi beyondkimchee, the whole breakfast for dinner idea is wonderful. I'm just not ready for that much food first thing in the morning, but really enjoy it at night. I took the pictures by placing the pancakes directly on a piece of black acrylic (which is very reflective stuff). Using foam core, I blocked out all light except that which was shinning directly on the pancakes, so the background would be dark and I wouldn't have any unwanted reflections. Thanks for your kind words, and for taking time to comment.

I saw the recipe on Foodgawker and made them tonight for Shrove Tuesday. Excellent!! My kids and I loved them! NO more box mix frisbees for us!

Hi Kate, I'm delighted you enjoyed them! They have good flavor, IMO, and are very easy to make. Thanks for taking time to let me know that you made them.

Bats in the Belfry said...

Mouthwatering..and your photography's so good..

Hi Bats, thanks so much for your kind words, and the comment.

These are now my go to recipe. The loveliest fluffiest pancakes I ever did eat!! Caremelised banana and maple syrup is my favourite topper for these. What a great recipe, thanks for sharing :)

Hi Anonymous, glad you enjoyed these!! Love the idea of bananas to top these. Thanks for the comment.