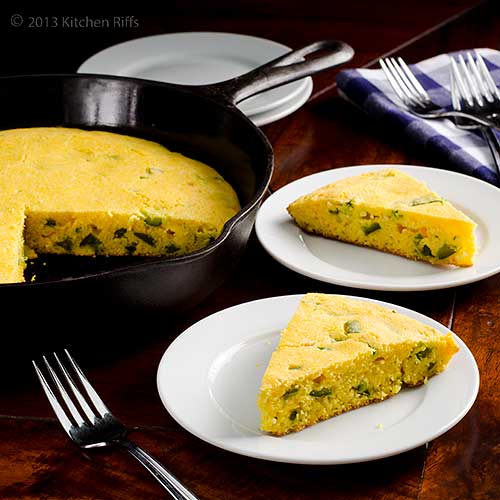 Great with chili or soup—or all by itself

Cornbread is a New World original. Long before Europeans landed in the Americas, corn (maize) was a food staple here. Native Americans prepared corn in many different ways—including grinding it into a coarse meal and baking it.

Nowadays, we usually make cornbread as a “quick” bread (i.e., one that’s leavened with baking powder). The modern version is also richer, often including milk and/or eggs.

Cornbread is pretty tasty stuff as is, but it’s even better when you add some zesty jalapeño peppers to the mix. Jalapeño cornbread pairs perfectly with spicy chili or hearty soup. And it makes a terrific snack all by itself.

Best yet, it bakes in 30 minutes or less. So you can whip up a batch and let it bake while you finish the rest of your dinner preparations.

Fresh hot bread for dinner? You’ll be a hero! 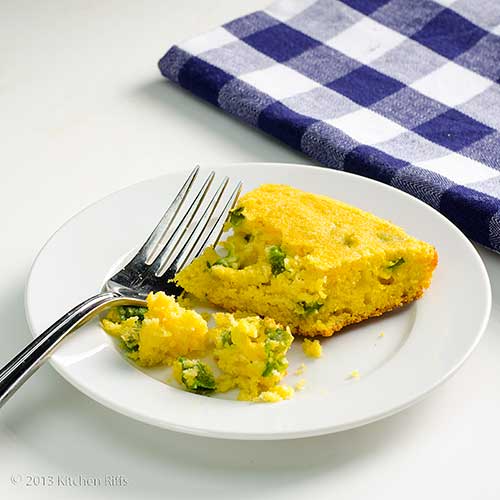 Traditionally, cornbread is baked in a cast-iron skillet. But these days, many people just use a baking pan (usually something that measures about 8 x 8 inches). I like to use a skillet myself—mostly because the bread looks so attractive in it.

You can use a skillet with a diameter anywhere from 8 to 10 inches. The larger the skillet, the thinner your cornbread. I like mine on the thin side, so I use a 10-inch skillet.

You can use either white or yellow cornmeal for this recipe—there’s no difference in flavor. White cornmeal tends to be more popular in the southern US, yellow in the north. I like the deep hue of yellow, so that’s what I use.

I don’t include sugar in my recipe. (That’s another regional difference, BTW. It’s more common to find sweetened cornbread in the north than in the south.) If you prefer a bit of sweetness, add a tablespoon or two of sugar to the mix.

Prep time for this recipe is about 5 minutes, baking time 25 to 30. So you can have hot cornbread on the table in under 40 minutes.

This recipe serves 6 to 8. Leftovers keep for a few days at room temperature when stored in an airtight container or wrapped well in plastic. 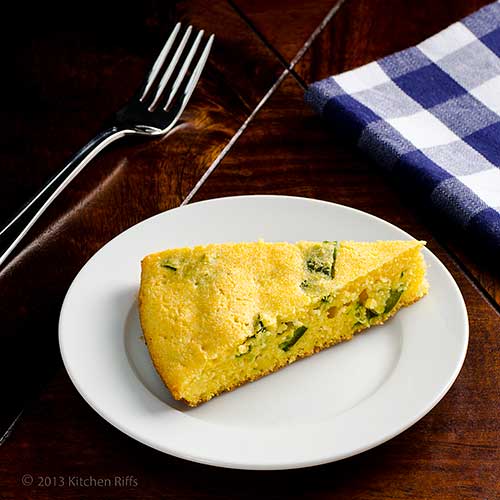 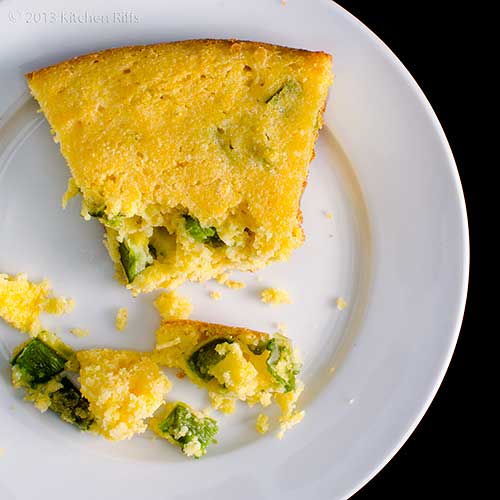 “Mmm,” said Mrs. Kitchen Riffs as she bit into a piece of Jalapeño Cornbread. “This goes great with Pork and Sweet Potato Chili.”

“It does,” I said, buttering a slice. “And cornbread is so quick and easy to make. Sort of like your Beer Bread.”

“Which is another great option with soup or chili,” said Mrs K R. “But I think Jalapeño Cornbread is what I want with that Pulled Pork Green Chile Chili you promised me.”

“Sunday, huh?” she said. “Just in time for the football game, I suppose.”

“Well, yeah,” I replied. “Our St Louis Rams are playing Houston. And chili makes great football fare. Maybe with a brewski or two.”

“Just remember to keep some antacid handy,” she said.

“What do you mean?” I bristled. “You’re saying my chili causes heartburn?”

“No,” she said. “I was talking about the Rams. The way they’ve been playing, you may need something to settle your stomach.”

“I’d set out some rye whiskey too,” she added. “You may need something stronger than beer.”