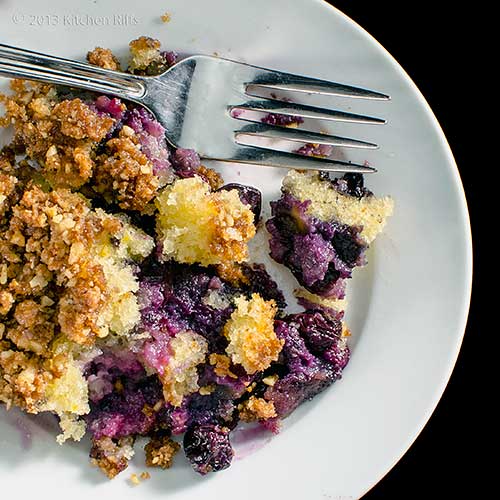 This coming Thursday is July 4th.  It’s Independence Day in the US — and a big cookout opportunity for many of us.  What’s more, July 1 is Canada Day.  So there are lots of reasons to celebrate here in North America!

The arrival of July also means that blueberries are at their best.  Although blueberry bushes produce fruit from May to September in this part of the world, the peak crop always arrives toward the middle of the season.  So starting about now, the year’s most flavorful blueberries are showing up in markets.  And since the blueberry is a North American original, what could be more fitting for July 4th, that most American of holidays?

If you’re making a blueberry dessert for a cookout, you’d probably welcome an easy-to-make dish that can be whipped up ahead of time — and transported easily.

Blueberry Buckle, at your service.

This traditional dish is a guaranteed crowd pleaser.  It’s great served neat, or you can fancy it up to create an appropriately patriotic plate:  Just add a bit of vanilla ice cream and some raspberries or strawberries for garnish.  Voilà!  A glorious red, white, and blue dessert. 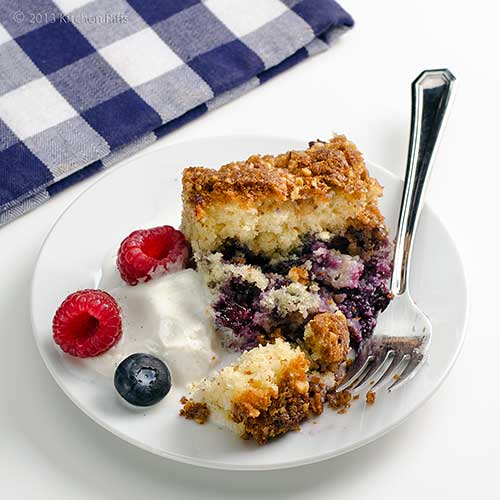 A “buckle” is a dessert that features fruit (blueberries are the most popular) baked in cake batter, and topped with streusel.  (See Notes for more information on buckles and other baked fruit desserts).

Blueberry Buckle is delicious served all by itself.  But it’s fun to dress up the plate with ice cream and colorful raspberries or strawberries (maybe some fresh blueberries, too).  A sprig of green mint adds nice contrast.  Or you could serve Blueberry Buckle in a bowl, with some heavy cream poured over it (when I was a kid, my mom sometimes served it that way).

Mrs. Kitchen Riffs is the baker in our household, and this recipe is hers.  She adapted it from a recipe found in The Cook’s Bible by Christopher Kimball. (BTW, according to Mrs K R, this recipe includes more butter and eggs, and less flour, than most recipes for Blueberry Buckle.)

This recipe takes about 30 minutes to mix up, plus another 45 to 55 minutes of baking time.

This recipe serves 8.  Leftovers keep well for a day or two at room temperature (covered with cling wrap).  Or store them in an airtight container in the refrigerator.

For the batter:
For the streusel topping:
For garnish (optional):
Procedure 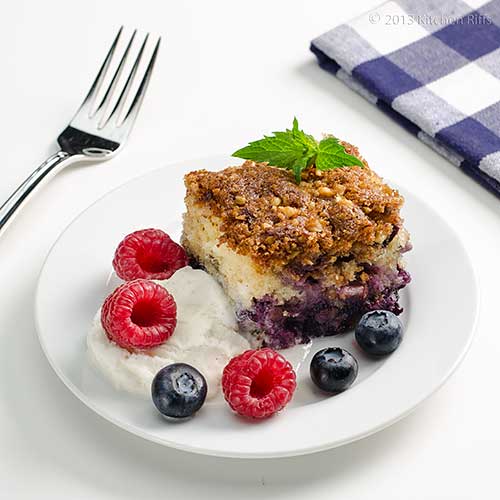 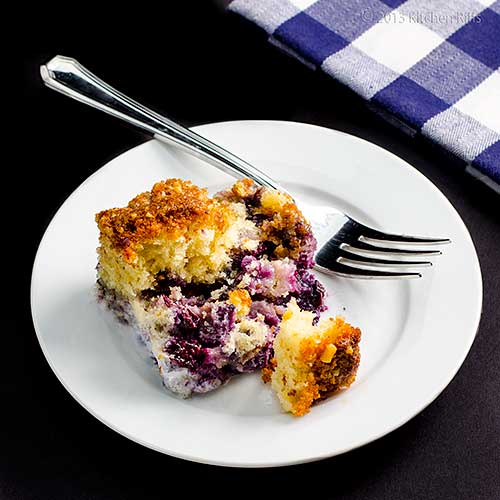 “Such a great dessert!” I enthused.  “Blueberry Buckle is one of my summer favorites — my mom always made this several times every summer when I was a kid.”

“Don’t know,” I said between bites.  “But maybe we should make more of them, with all these blueberries we have around.”

“That certainly would be appropriate,” said Mrs K R as she watched me oink down my last bit of buckle.  “Although a fool might be even more appropriate.”

Wonder what she meant by that.