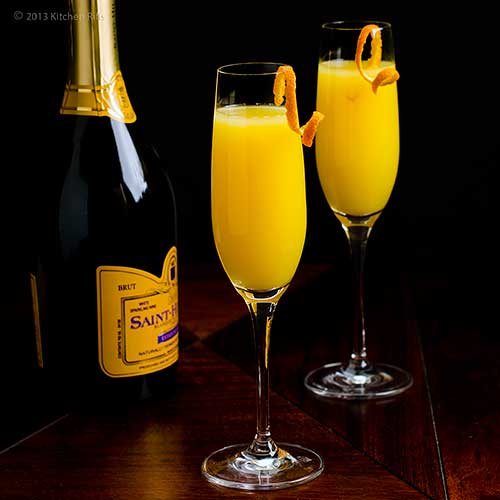 Perfect for a festive brunch

In the US, the Mimosa is one of the two most popular alcoholic beverages for brunch (the Bloody Mary is the other). It’s a great-tasting mix of OJ and bubbly that goes down smooth, with a flavor that invites you to have a second. Maybe a third. Fortunately, the orange juice dilutes the sparkling wine. So you can drink several without getting blotto before you’ve had that last bite of toast.

And because the drink contains champagne, it’s particularly appropriate for special occasions.  It’s a natural at brunches that celebrate weddings, graduations, or other special events (Father’s Day, anyone?)  But it’s also perfect for a lazy Sunday morning when it’s just you, your sweetie, that thick Sunday paper — and plenty of time to enjoy each other’s company.

So if you have a festive brunch coming up, this is your drink.  And if you don’t have a special occasion on the horizon, no worries:  Pouring yourself one of these makes any day special. 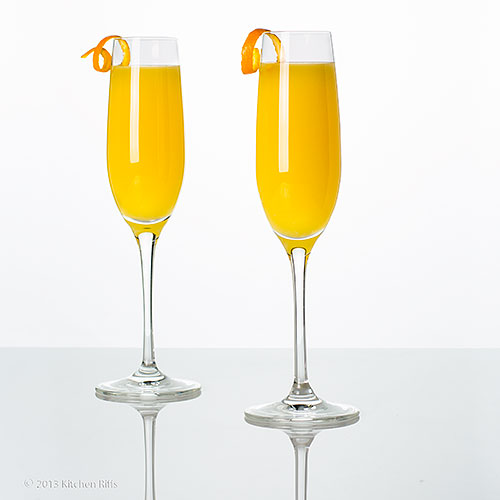 The Mimosa is nothing more than orange juice (fresh-squeezed tastes so much better than store-bought) and champagne (or another sparkling wine).  But there are some interesting variations on the drink, as I discuss in the Notes (including adding Grand Marnier).

When making a Mimosa, the biggest decision is what proportion of OJ-to-bubbly you should use.  In the US and throughout much of the world, the standard is 2 parts orange juice to 1 part sparkling wine.  But in Britain, the ratio usually is reversed:  1 part OJ to 2 parts bubbly (and that’s the ratio I use in my recipe).  Some people like equal parts of each ingredient.  So what to do?  I suggest tasting several variations to decide which is your favorite.

The next question is:  What kind of bubbly do you want to use in this drink?  I’d advise not using anything too pricey — its flavor will get lost in all that orange juice.  I prefer a brut in the $10 to $15 range.  At that price, you won’t get real champagne — you’ll have to buy sparkling wine (more on this in the Notes).  But no worries.  Sparkling wine is excellent in a Mimosa.

The Mimosa is best served in a champagne flute.  This recipe takes just minutes to prepare, and serves one. 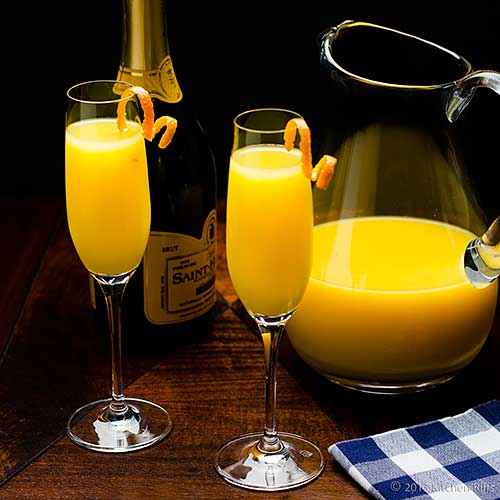 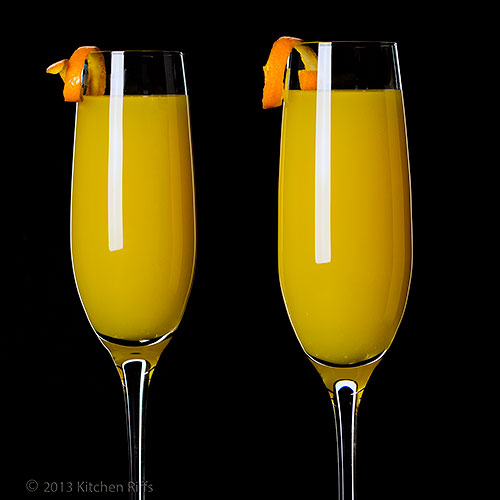 Maintaining the Model of Blogging Professionalism

“Mmmm,” blissed Mrs Kitchen Riffs, taking a sip of her Mimosa.  “Such a great drink!”

“Too bad you don’t have a weakness for something less expensive,” I observed.  “Like maybe beer.”

“I have standards,” sniffed Mrs K R.  “You wouldn’t want me to abandon them merely for pecuniary reasons, now would you?”

“We have our readers to think about!” said Mrs K R.  “So no more of this silly talk about expense.”

“Pour you another round?” I asked.

“Of course!” she replied.  “This time with a tad more bubbly.  I’m testing ratios, you see.”