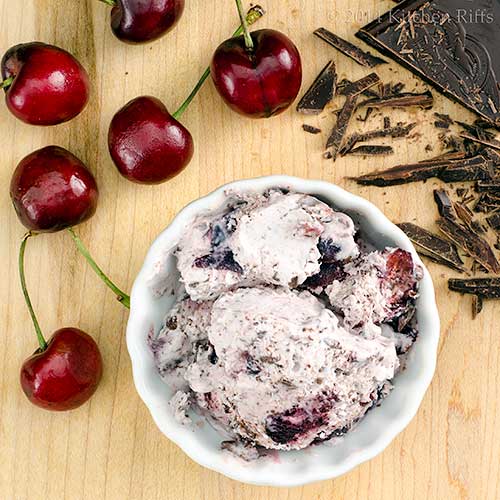 How often do you make ice cream at home? Until recently, our answer would have been “not very.”

Mostly, that was because we couldn’t get decent results with home ice cream makers. The smaller “pre-freeze” units (the ones where you need to freeze the bowl) only kinda sorta worked for us. The larger machines (the kind with built-in condensers) do a better job—or so we’ve heard. But our kitchen space is limited, so we’ve had to rule out that option. And no way are we going to bother with rock salt and hand cranks.

Which meant that for years, we just shrugged and bought Ben and Jerry’s.

No more, however. We’ve discovered a quick no-churn, no machine way to make ice cream that produces superior results. And it’s a lot cheaper than buying pints of Cherry Garcia® (our favorite flavor, for which this recipe is a credible alternative).

Anybody want to buy a used ice cream maker, cheap? 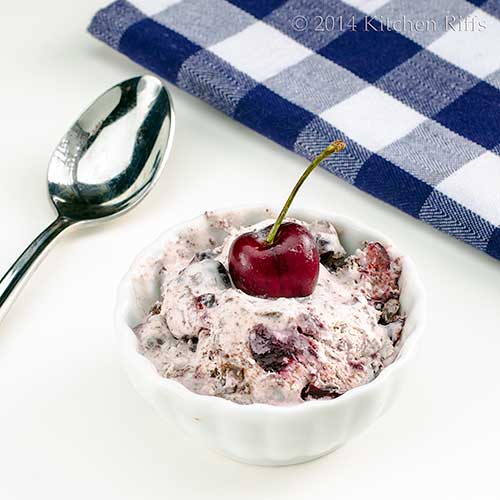 Not hankering for cherry ice cream? No worries. It’s easy to adapt this recipe to other flavors. So just think of this as a master recipe for no-churn ice cream. More in the Notes.

This recipe is cream-rich, so it isn’t diet food. But it’s so luscious, you’ll probably be satisfied with a smaller amount than you usually eat. It also uses sweetened condensed milk, which is just regular milk with much of the water removed and sweetener added. Milk and sugar are common ingredients in ice cream making, so using sweetened condensed milk is a quick way to mainline those ingredients into your ice cream base.

This recipe requires you to whip cream, which is easiest to do if you have a stand mixer. A hand mixer will work, but it takes longer. After you mix the ice cream, you’ll need to freeze it for several hours to develop proper consistency.

Mrs. Kitchen Riffs is the sweets maker in our house, and this recipe is her creation. She adapted it from a basic recipe she found in 100+ Luscious Ice Creams without a Machine, an e-book by Suzy Bowler (it’s a very entertaining cookbook, BTW).

This recipe takes about 20 minutes of hands-on time. Then you’ll need to let the mixture freeze for at least 3 or 4 hours (maybe more, depending on your freezer temperature).

The recipe yields about one quart, though it can easily be scaled up or down. Being us, we often double it. 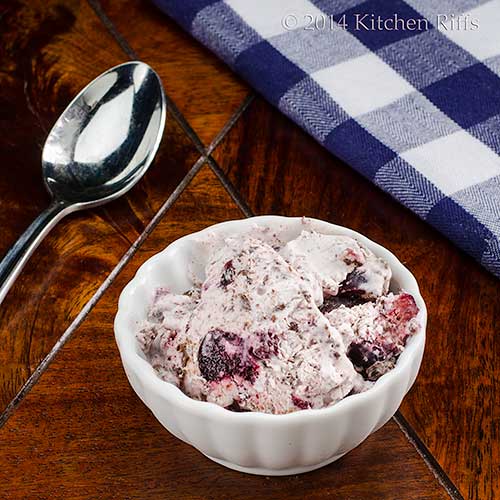 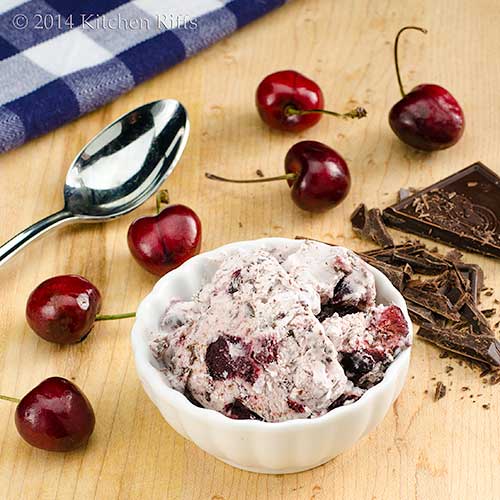 “This is wonderful,” I said, taking a bite of ice cream. “You outdid yourself with this recipe.”

“Thanks,” said Mrs. Kitchen Riffs. “It’s fun to try out variations on it too.”

“Yeah, all those other flavors you’ve been making have been out of sight,” I said. “I loved the salted caramel one you made the other day.”

“Once you learn the basic technique, it’s easy to come up with different flavor combos,” said Mrs K R.

“Hey, you should try a new flavor every week,” I said, scooping up another bite. “Or maybe even two different flavors. Just for research purposes, you know.”

You may also enjoy reading about:
Zabaglione
Homemade Meringues with Strawberry Sauce
Lemon Cheesecake with Walnut Crust
Chocolate Fudge with Nutella
Walnut Roll Cake
No-Cook Fruit Fool
Grape Flaugnarde (Flan)
Or check out the index for more
Posted by Kitchen Riffs at 9:15 AM