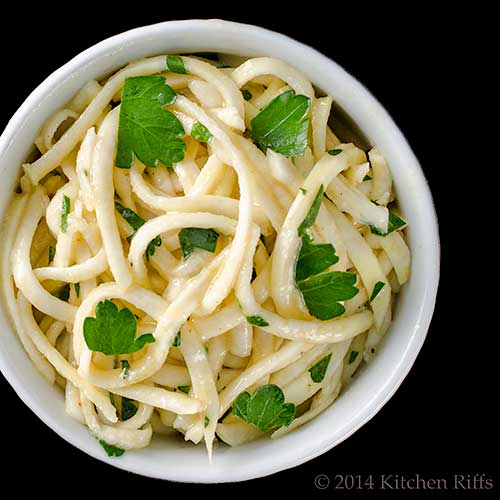 Celery root (celeriac) is a type of celery grown specifically for its root. Even if you’ve never used it, you’ve seen it in the grocery store. It’s the brown, knobby veggie that (to the uninitiated) looks like a rock. But trust me, it’s edible—with a subtle, delectable flavor.

Celeriac is better known in Europe than in the US. When shredded and served raw—as it is in this dish—it has a crisp crunch. Combine it with tangy dressing, and you have a dish that resembles coleslaw. And one that happens to be one of the iconic dishes of French cuisine.

You can serve Celery Root Rémoulade as a starter, instead of a salad. Or as a side dish to accompany most fish, meat, or poultry dishes. It even goes great with hamburgers. Or as they say in French, les hamburgers. 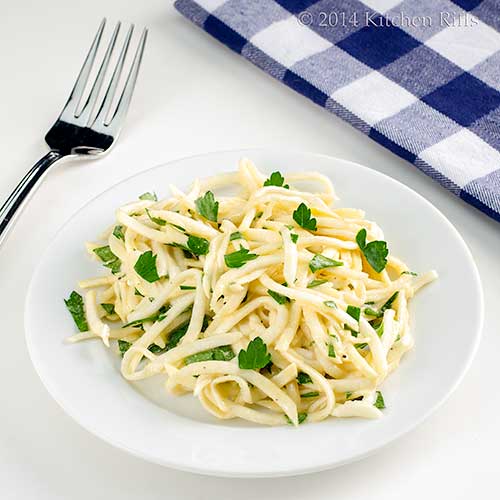 Celeriac is often served cooked, though it doesn’t have to be—as this recipe shows.

Just as with coleslaw, Celery Root Rémoulade can be made with a creamy dressing (mayonnaise-based) or a vinaigrette (olive oil-based). In both versions, mustard is the dominant flavor. I prefer vinaigrette, so that’s what we’re doing here. But in the Notes I explain how to make a mayo-based version.

This recipe has several steps, but all are quite simple and quick: Prepare a mustardy vinaigrette. Peel and shred the celeriac. Then toss it all together. Although celeriac has a tough hide, a good swivel peeler works quite well on it. Or do as I do: Perch the celeriac on one end, and use a knife to slice off the peel (much as you might cut the peel off an orange). You lose a bit of celeriac flesh this way, but you’ll be able to peel it in well under a minute.

One important point to keep in mind: Once you peel celeriac, its white flesh discolors very quickly. So as I peel, I  rub the cut sides with a lemon slice (the acid in the lemon retards browning). Because this is such a quick recipe to prepare, discoloration shouldn’t be much of an issue—but do keep that lemon slice handy.

My recipe is adapted from Julia Child’s The Way to Cook.

This dish takes 10 minutes or so to prepare.

The recipe serves 6 to 8. Although it’s good right after you make it, it tastes even better after several hours in the refrigerator (it mellows out a bit).

Leftovers can be stored in an airtight container in the refrigerator for several days. 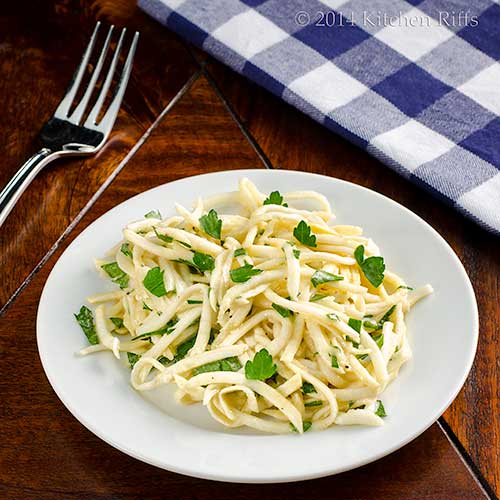 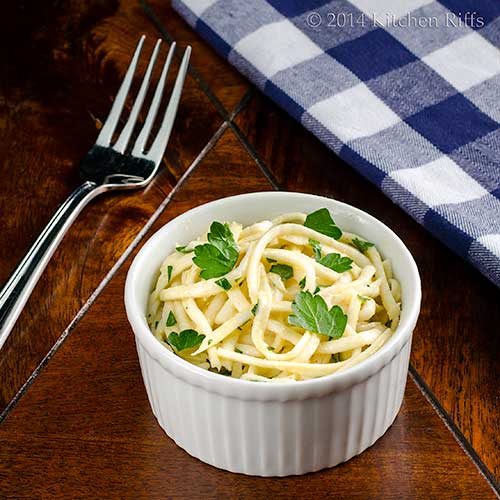 The Mother of all Celery

“Wow, who knew celery could be so versatile?” said Mrs. Kitchen Riffs. “Any more celery recipes coming up?”

“Think we’ll take a break from it,” I said. “But we’ll be featuring several more throughout the year—for both celery and celeriac.”

“You could say that celery root is the mother of all celery,” I said. “And Celeriac Rémoulade, with its wonderful mustard flavor, has such a nice, sunny personality.”

“Which makes it a dish I can root for,” said Mrs K R. “Definitely one that can cut the mustard.”

Any more of these puns, and I’ll need an escape root.

You may also enjoy reading about:
Braised Celery with Tomato and Parmesan
Celery, Corn, and Bacon Chowder
Italian Celery and Mushroom Salad
Creamy Coleslaw
Garlic Coleslaw
Jalapeño Coleslaw with Pimentón
Grilled Hamburgers
Or check out the index for more recipes
Posted by Kitchen Riffs at 9:15 AM