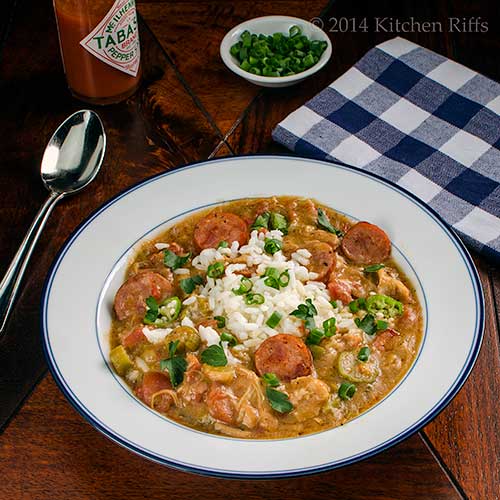 New Orleans flavor in your own kitchen

The US has loads of interesting regional dishes. One of the best known is gumbo, a hearty stew-like dish with bottomless flavor. Gumbo originated in south Louisiana eons ago. Today it’s made with a wide variety of meat and seafoods, in both Cajun and Creole styles. It’s so popular (and the variations are so endless) that probably every family in Louisiana has their own unique recipe.

All gumbos are based on a long-cooked roux (the flour-and-fat mixture that also forms the basis for many gravies). When we make gravy, we usually cook the roux for only a few minutes. For gumbo, we need to cook it for at least half an hour, and usually more like 45 to 60 minutes. It’s a bit of work, yes. But the flavor payoff is worth it. And that flavor is the essence of gumbo.

Mardi Gras is coming up this Tuesday—and it’s the biggest celebration of the year in New Orleans. What better way to join in the festivities than by making a batch of gumbo for yourself? It’s like a party in a bowl. 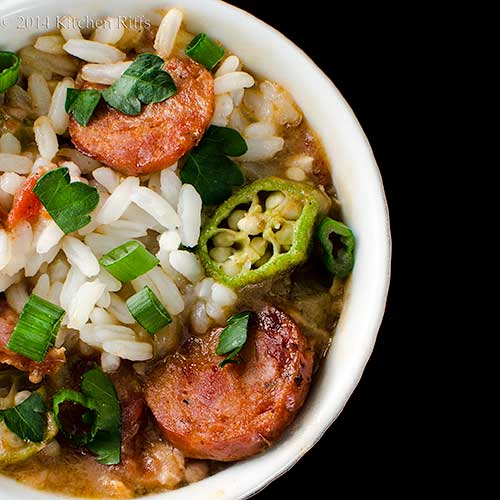 There aren’t many rules for making gumbo, though one informal one says it should contain either meat or seafood—you shouldn’t mix the two proteins together. But there’s an exception to every rule, and it’s common in New Orleans to find gumbos that combine seafood and sausage.

In any case, we’re safe from the gumbo police because we’re not including seafood in this classic-style Chicken and Andouille Sausage Gumbo. Though I won’t tell if you decide to add some shrimp about ten minutes before you serve this dish (it’s a delicious addition).

To make gumbo, you need to know about two main principles of Louisiana cooking. The first is the “trinity”—the mix of onion, celery, and green pepper that appears in numerous Cajun and Creole recipes. Cooks differ on their preferred proportions, but I like to use 1½ parts onion to 1 part each of celery and green pepper.

The second thing you need to learn is how to make a Louisiana roux. This is an equal mix of fat and flour that’s cooked for a long time—at least half an hour, and often over an hour. The longer you cook it, the deeper brown it gets, and the better the flavor. And the better the gumbo! Although some cooks like to cook roux until it’s a dark mahogany, I suggest you cook it until it’s the shade of peanut butter. Less can go wrong this way, and the flavor is quite good. Besides, it’ll take less time.

Speaking of time, this is a dish that takes a while to make. I suggest you set aside about 2 hours for the initial prep work (which includes cooking the roux). You’ll probably need only about an hour and a half, but you don’t want to feel pressured. After the prep work is done, the gumbo will take at least 2 hours to cook, although you can extend the cooking time another hour or so if you wish.

This dish makes several quarts—which is enough to feed hordes (if you’re spending all that time making roux, you might as well cook up enough gumbo to make it worth your while). Leftovers freeze extremely well if stored in airtight containers.

For the Cajun/Creole Spice Mix:
You can substitute a commercial mix if you prefer; see Notes.
For the Gumbo:
Procedure 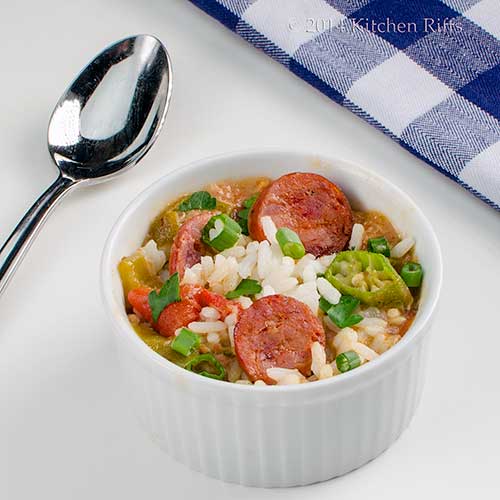 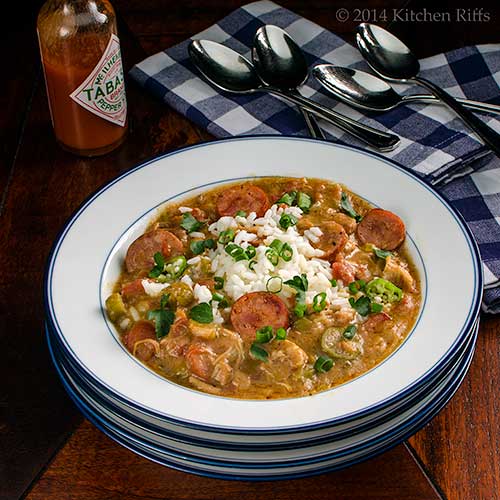 “I don’t totally understand the difference either,” I said. “As I realized last Mardi Gras, when we did Red Beans and Rice.”

“This spicy gumbo makes a girl thirsty though,” said Mrs K R. “We need a traditional New Orleans drink to accompany it.”

“How about pairing with a Vieux Carré?” I said.

“It’s the original name of New Orleans’ French Quarter,” I explained. “And also the name of a very tasty cocktail.”

You may also enjoy reading about:
Red Beans and Rice
Winter Squash, Corn, and Bacon Chowder
Chunky Pork and Sweet Potato Chili
Celery Root (Celeriac) Rémoulade
Fennel Soup with Shrimp and Beans
Or check out the index for more recipes
Posted by Kitchen Riffs at 9:15 AM